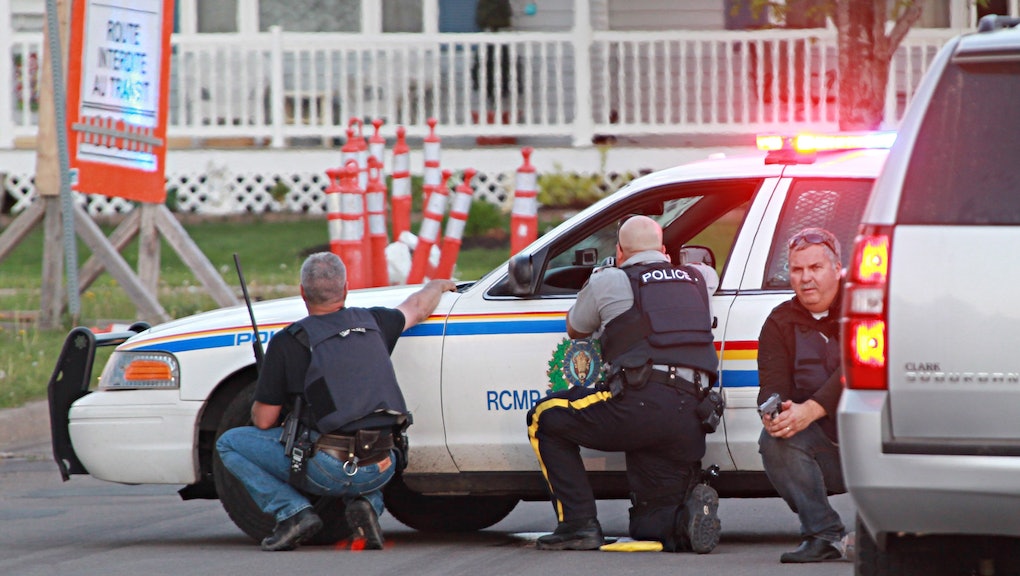 Sun News Network is treating a mass shooting like no other major North American outlet.

After a shooter murdered three Royal Canadian Mounted Police officers and left two others in critical condition in New Brunswick, the Canadian network refused to show his name or picture. The network ran an editorial Friday to give the reasoning behind the decision.

"It's easy to report on the life of the killer, to scour his deranged Facebook page, to speculate about motive, but doing so could actually encourage the perception that his heinous acts are somehow justified," the editorial reads. "We will not help give this killer his blaze of glory."

Interestingly enough, Sun News is known as a conservative network, called "Fox News North" by its detractors (though the network has pushed back against that comparison).

The reasoning: Studies have shown that intense media coverage of celebrity suicides can lead to a copycat effect, increasing risk factors for suicide. While mass shootings are too rare to allow for a statistically significant determination of whether media coverage helps lead to copycat murders, some researchers theorize that the same effect is in play.

It's not difficult to see why. Many shooters express a desire for attention or fame before their killings; the two Columbine shooters hoped Steven Spielberg or Quentin Tarantino would make a film about them. In the wake of mass shootings, media outlets descend on a community and seem to barrage the airwaves with details about the perpetrators — what they said on social media, how they dressed and what video games they played.

"With the unwitting cooperation of 24/7 media, he will become a national villain," Vox's Ezra Klein wrote about the UCSB shooter two weeks ago. "And other sick young men will see him get the renown in death that they have have never been able to receive in life."

Responsible reporting: So where do outlets draw the line between covering what is undoubtedly a major news event and not making shooters into celebrities? The National Institute for Mental Health, in cooperation with many other government agencies, has a set of guidelines for media coverage of suicide that can inform some aspects of shooting coverage.

In other cases, it comes down to exercising good news judgement. Coverage of the UCSB shooter's misogynistic motives, mainly gleaned from his online postings and videos, drove national conversations about the link between sexism, racism and violence, including the launch of #YesAllWomen — arguably welcome outcomes from such a tragic event. Reporting on gun control policy and mental health access in relation to shootings can also be vital.

Sun News exercised its judgement and decided that releasing the New Brunswick shooter's name and photo would harm rather than help the story and its audience. Even if it doesn't spark a chain reaction in U.S. media, it's still a conversation that should happen in every newsroom in the wake of such a tragedy. There are always plenty of details out there — which ones are really important?