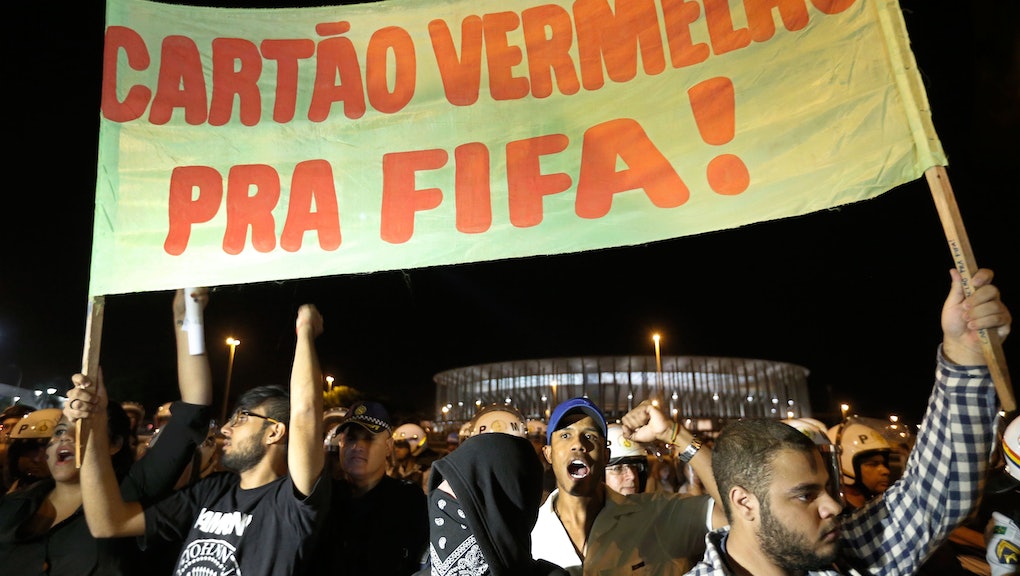 #NotGoingtoBrazil Is the Latest Rallying Cry of the World Cup

The news: The upcoming FIFA World Cup in Brazil has been courting controversy for months. Now, merely days before kickoff, protesters are using a Twitter hashtag to voice their discontent.

Over the weekend, #NotGoingtoBrazil and #NoVoyABrasilPorque became populist hotbeds of anger and frustration at the Brazilian government. While these hashtags are certainly reminiscent of #SochiProblems, the tweets are less focused on unfinished hotels and toilet troubles and more on the underlying political and infrastructural problems that have plagued this World Cup.

Why is this happening? Brazilians have been sporadically protesting the World Cup for the past year, though the movement has been picking up steam again in the lead-up to the event. Tens of thousands have protested against the government for various issues from indigenous land rights to drug and gang violence, forced evictions and allegations of police brutality. Union groups of teachers, bus drivers, subway workers and police officers have all gone on strike at various points, resulting in mass chaos.

Even Brazil's biggest soccer icons, Pelé and Ronaldo, have criticized the mismanagement of public funds and how much the government has sunk into the World Cup. "It's clear that politically speaking, the money spent to build the stadiums was a lot, and in some cases was more than it should have been," Pelé reportedly said at a talk in Mexico City in May. "Some of this money could have been invested in schools, in hospitals ... Brazil needs it. That's clear."

But it's not just directed at Brazil either. While most people have attacked the Brazilian government's handling of the World Cup, a fair share of the Twitter criticism has also been directed at FIFA, the international soccer organization behind the event.

FIFA has recently been hit with allegations of bribery in connection to Qatar's winning bid to host the World Cup in 2022. According to leaked documents published by the U.K.'s Sunday Times, Qatari slush funds were used to pay around $5 million to FIFA executives. These revelations have not only hurt Qatar's image, but also the institution of world soccer itself. Try as they might, FIFA officials will have a hard time cleaning up the stench of corruption by kickoff this weekend.