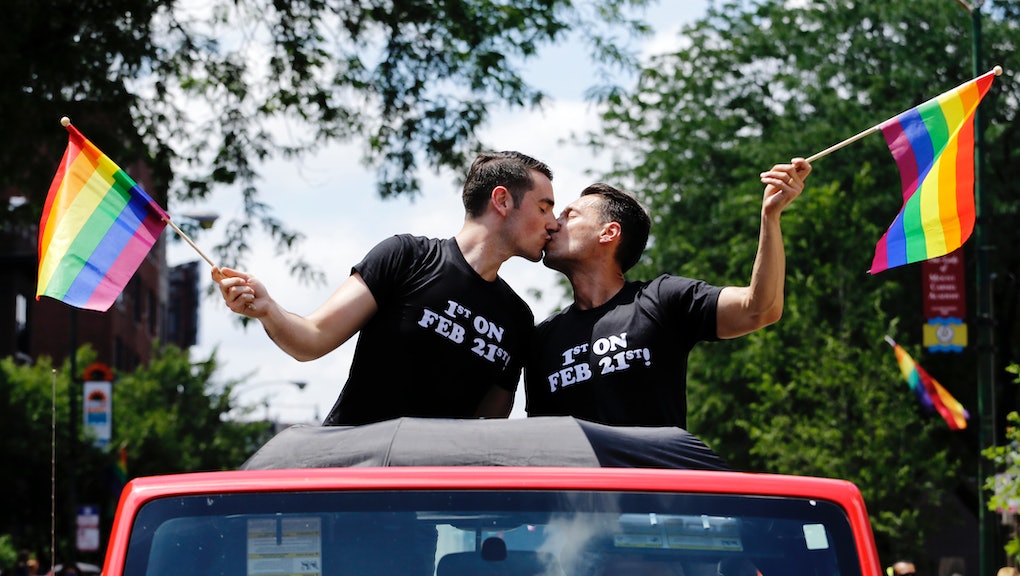 The parades are over and the confetti has been swept up after another major month of LGBT Pride celebrations. Although this year's festivities marked 45 years since the Stonewall Riots and an unprecedented string of victories for same-sex marriage, most mainstream narratives still perpetuate the unfortunate myth that marriage is the end-all, be-all issue for the community. Outlets like the Chicago Tribune's RedEye even quoted supporters attending Chicago's first Pride since Illinois legalized same-sex marriage, who claimed that marriage rights translate into "full equality."

Nothing could be further from the truth.

In reality, this is a facade of equality, and it only really applies if you're a mainstream, respectable and privileged gay or lesbian person. There are still many battles to be won to achieve some semblance of equality for the entire LGBT community, all of which are just as important as marriage; they just tend not to get anywhere near the same amount of media attention or casual discussion (something activists, including Illinois State Rep. Greg Harris, mention in the same Tribune article).

Even though 20 states and counting now recognize same-sex marriages, gay people struggle with a number of other institutional barriers to their freedoms on a daily basis. The same can be said for bisexual, transgender and gender non-conforming people, all of whom encounter similar but unique stigma and civil rights struggles, which sometimes overlap with homophobia.

We need to continue calling out the many other contentious yet critical issues that need our words and our actions, to ensure fairness and respect for everyone, regardless of their sexual orientation. This discussion should acknowledge both the privileges afforded to heterosexuals and the limitations endured by their queer counterparts.

Here are just a few of the ways we can start:

1. LGBT individuals can still be fired, simply for being who they are.

Queer people don't have any laws protecting their employment in 29 states, meaning they can be unjustly fired at any time because of their sexual orientation, regardless of whether or not they are out. (When including protections for trans people, that number goes up to 32.) Congress still hasn't passed the Employment Non-Discrimination Act, which would end this exclusion, despite public opinion now falling on the side of LGBT rights in the workplace.

2. LGBT individuals are still denied basic public accommodations because of their sexuality or gender identity.

Twenty-nine states have no laws protecting queer people from being denied basic accommodations, like getting admission into a movie theater or even ordering customized baked goods.

Despite congressional passage of the Hate Crime Prevention Act, which lists sexual orientation as a protected category, more than 20 states still don't recognize by law that social discrimination against non-hetero, non-cisgender people often manifests itself in physical violence and even murder.

During the panic over the rapid, inexplicable spread of HIV/AIDS in the 1980s, the Food and Drug Administration (FDA) instituted a lifetime ban on blood bank donation for men who have sex with men. Even one man-on-man sexual encounter merits the exclusion, based on the mandatory questionnaire intake workers complete for each donor. Although the FDA has considered overturning the ban, especially now that many researchers, the American Medical Association and the world's two largest blood banks oppose it, the 30-year ban has stigmatized many gay men, despite their health and sexual habits. Especially as blood banks face supply shortages, this outdated policy is both homophobic and life-threatening.

6. Same-sex parents struggle for the custody rights that heterosexuals are automatically granted.

Most states still don't allow a second spouse in a same-sex couple to gain legal recognition as a child's parent and guardian, creating a second-class legal status for that excluded parent and the entire family. In many cases, it's because the marriage is not legally recognized. More often than not, it's because of the unfair assumption that non-hetero people can't raise kids.

7. Unlike their counterparts, heterosexuals and their relationships are universally accepted by major religious denominations.

Some religions consider being queer a grave sin and frequently condemn it in doctrine, sermons and other public remarks. For LGBT believers, compulsory heterosexuality means exclusion from church leadership, being told that your sexual expressions and desires are "against God" and even being kicked out of the faith community. Even heterosexual religious leaders supporting gay marriage face dire consequences.

Despite the national outcry over youth suicides in recent years, which prompted the It Gets Better campaign, laws in 25 states don't classify sexual orientation as a protected category. In a 2011 study by the Gay, Lesbian and Straight Education Network, roughly 82% of queer youths reported being verbally harassed because of their identity, and 38% reported being physically attacked.

Bullying undermines the mental health and physical well-being of all children. And queer young people are targeted disproportionately, and at higher rates, for harassment and public humiliation — not only from other kids, but also by the adults who should be keeping them safe.

With the discussion still hinging on "abstinence only" versus comprehensive approaches, the issue of queer inclusion has yet to be settled across the board. In most classrooms, students aren't being taught sexually healthy habits for when they have romantic relations with someone of the same sex.

The lack of inclusion sends the message that gay and lesbian sex can't and shouldn't be discussed in an open and affirming manner.

10. Queer people are often provided inadequate health care because of stigma and discrimination.

Numerous reports from organizations such as the Institute of Medicine and the Kaiser Family Foundation indicate that bias based on sexual orientation often thwarts access to specific health care services, including STI testing, counseling and even a basic checkup. The LGBT community also has specific health challenges that aren't universally understood by doctors, despite educational resources being readily available or in development.

11. Heterosexuals can visit their sick or dying spouse in the hospital, without fear of being turned away.

The majority of states do not have specific legal pathways that protect same-sex couples' hospital visitation rights. However, any hospital participating in Medicare and/or Medicaid is required by federal regulations to uphold inclusive visitation practices, because of a 2010 presidential directive issued to the Department of Health and Human Services.

Despite that progress, some couples still don't have their visitation rights protected. And there are too many heart-wrenching stories of one loving spouse being barred from the bedside, while the person they vowed to cherish — in sickness and in health — took their final breaths.

This is nowhere near a comprehensive list. Ultimately, it's up to each one of us to name these issues for exactly what they are, and as we encounter them.

Speak up about how you've witnessed or experienced anti-LGBT discrimination. Tweet us (@IDsMic) using hashtag #MoreThanMarriage to continue the conversation — because the battle for equality is far from over.