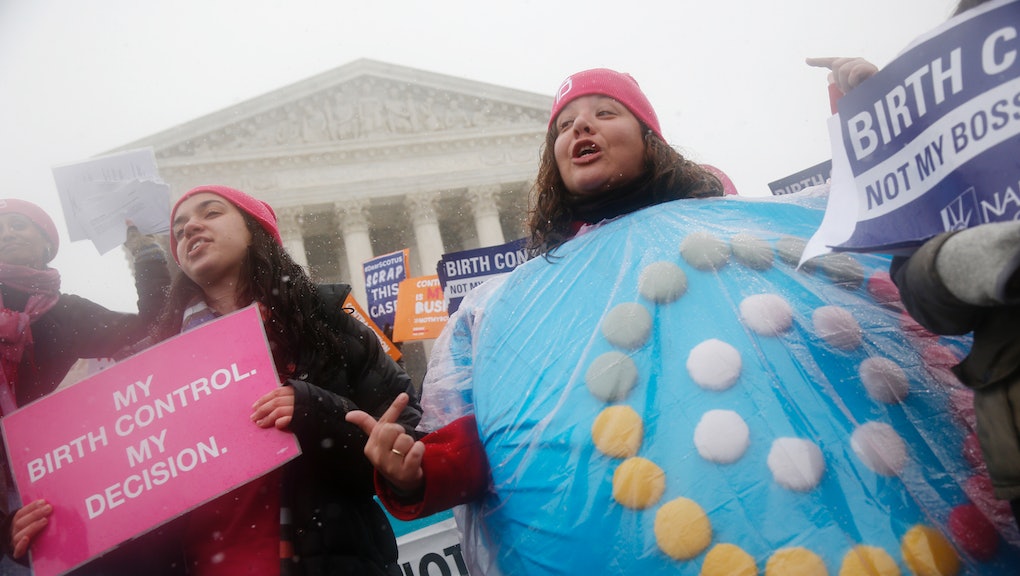 Thanks to the already-infamous Burwell v. Hobby Lobby ruling, for-profit businesses now have a say in what contraception and birth control options they offer their employees.

So far, the biggest protest has come from Supreme Court Justice Ruth Bader Ginsburg, whose dissent against the ruling has gone viral both on its own and as a song, courtesy of Jonathan Mann. Now, Congress might be able to take action against the ruling. But political activism requires cultural revolution; a comedic song and one dissenting opinion isn't enough. We need to dig deep and change our culture if we really want to fight this ruling. We need our musicians to crystallize how we all feel.

The death of protest music is a real and present danger. Our generation needs a Bob Dylan and Joan Baez to make waves for women's rights to contraception. Here are nine artists who have taken stands for a woman's right to choose what she does with her body — musicians we could use right now:

Written in 1975, "The Pill" was a controversial and groundbreaking conversation-starter on a woman's right to oral contraceptives. Loretta Lynn was denounced by preachers across the United States and her song was banned by more than 60 radio stations, which some speculate is to why it rose so quickly to No. 5 on the Top Hits.

In a 1975 interview with People, Lynn talked about the song's story: "The wife is sayin', 'You've kept me barefoot and pregnant all these years while you've been slippin' around. Now you straighten out or I'll start, now that I have the pill.'"

While that's not exactly the most compelling argument for access to birth control, this was essential to getting people to really talk about the pill back in the mid-'70s. It's hard to imagine oral contraception between a married couple making waves, but IUDs now have the same weight as the pill once did.

"Brick" launched the Ben Folds Five into stardom back in the mid-'90s. It's a reflection on Folds' experience in high school, when his girlfriend decided to have an abortion.

Though Folds said that the song is neither supposed to ultimately condemn nor support the practice, he went on to say in an interview with The AV Club in 2005 that "I'm not a very regretful person. In fact, I'm probably more regret-free than anybody I know."  By writing a song about the experience, and living without regrets, Folds humanized the experience of an abortion and portrayed it in a manner women and men on both sides of the fence can relate to.

Lisa "Left Eye" Lopes is known as "Left Eye" because she used to tape a condom over her left eye as a stand in favor of safe sex. This was inspired by Chili's abortion. They were some of the first mainstream hip-hop artists really to take on issues of safe sex, abortion and AIDS. In fact, "Waterfalls" was one of the biggest AIDS anthems of our time.

Lady Gaga is a known social rights activist for the LGBT community, but she's also known for her love of birth control — specifically, condoms. She dressed from head to toe in latex as a giant condom on Good Morning America to promote healthy and safe sex.

"I think we must all remember that the ultimate accessory is the condom," said Gaga in an acceptance speech for the Stylemaker Award at the Accessories Council Exchange Awards. Gaga has even partnered with Jeremy Scott to design high-fashion Proper Attire condoms, where all the proceeds go to Planned Parenthood.

Cyndi Lauper has always been a strong supporter of women's rights, so it's no surprise that she was among the first to openly voice her disdain for SCOTUS's ruling in favor of Hobby Lobby.

"I'm standing with women across the country to fight back against discrimination, and I urge you to join me," wrote Lauper in a recent op-ed called "Girls Just Want to Have Birth Control." She went on to liken the ruling to a 1950s-caliber setback for women, and called out Hobby Lobby for labeling access to certain female birth control "controversial" while having no qualms with providing Viagra and vasectomies for their male employees.

After growing up in a devout and deeply conservative family, Katy Perry said that she learned about birth control at her local Planned Parenthood and has been a supporter ever since.

"I was always scared I was going to get bombed when I was there," the singer told Vanity Fair. "I didn't know it was more than that, that it was for women and their needs. I didn't have insurance, so I went there and I learned about birth control." Apparently Perry settled on the pill, which she's admitted to chewing like Vitamin C. Yum.

Macklemore made his first truly political statement with his hit song "Same Love," and he's since continued to promote LGBT and women's rights in the world of hip-hop.

Despite mixed feelings from his audiences and others, the singer committed even more firmly by partnering with the American Civil Liberties Union, releasing an awkward yet supportive ad featuring the phrase "It's your vagina — do what you want with it."

Madonna admitted in a 1994 interview to having "several" abortions, but refused to go into detail because she felt it was irrelevant to the conversation. Biographers have claimed she's had anywhere from five to 11.

But she's right to keep that private — she's refusing to play up the process and, like Ben Folds, Madonna maintains that abortion is a personal decision made by women and not for women.

Known for the occasional Twitter rant, Cher has used social media on many occasions to promote access to birth control and a women's right to choose. In one exchange, Cher tweeted, "PRO CHOICE IS NOT ANTI LIFE!..." Even though Cher's mom nearly had an abortion when she was pregnant with her, Cher remains firm in the belief that women should control their own bodies.

Her continued popularity with this generation only makes her opinion and music more powerful.