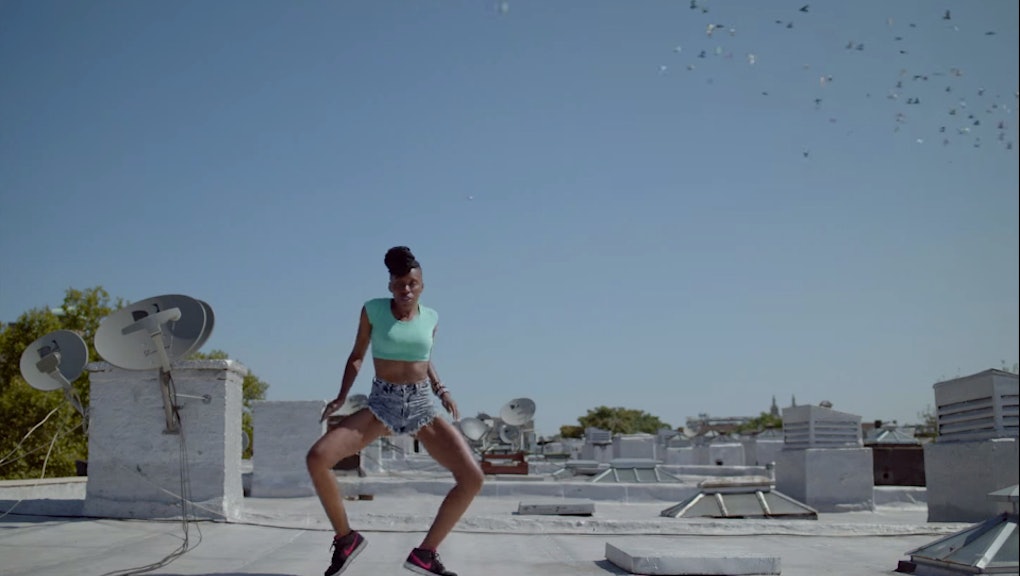 This has been an incredible week for music videos, but you wouldn't know it from the Internet. Most of them were likely passed over by a public anxiously waiting for the video to J. Lo and Iggy Azalea's "Booty."

Too much of the conversation around songs and music videos focuses on what's most sexually, rather than artistically, provocative. Though sexuality in music videos can often be the best tool for fighting pervasive sexism in music, recently it's come to dominate some of the other ways music videos can be great. In the aftermath of "Anaconda," the only videos we're willing to pay attention to are, basically, "Anaconda pt. II."

But here are five music videos from this week that will remind you just what how powerful a great music video can be.

Sinkane's new video is a good reminder that there are other dance moves besides twerking. The London-born Sudanese producer premiered his latest video "How We Be" on BuzzFeed earlier this week. It features some incredible talents dancing step, ballet and break in picturesque New York locations.

"How We Be" totally nails that carefree summer vibe that's slipping away as we head into the serious music of fall.

After penning and producing most of Beyoncé's recent opus and concealing everything about his identity for months afterwards, the mysterious Boots finally reveals his face — and it's all fucked up.

Covered in scratches, cuts and bruises, Boots, aka Jordy Asher, croons "Mercy" straight into the camera. It's perfect soft and haunting pop that's enhanced by the stark simplicity of the video. "Mercy" is currently the only song you can hear by Boots on the Internet, as he's replaced all the songs on his SoundCloud with copies of this track. He really wants us to hear "Mercy." You should.

Off The Physical World, the band's first release in 10 years, "Trainwreck 1979" perfectly gets at what it's like to be a music fan. The video shows a female fan struggling to learn the bass riff to "Trainwreck" before going to a show and seeing it live. She comes back from the concert exhausted but inspired, and by the end of the video, she nails the bass line with precision.

It's a simple, everyday look at the awesome, inspirational power music can have, and a reminder that good music doesn't have to do much more to be entertaining and meaningful.

Virtuoso bassist Thundercat created this monstrosity of a video with the help of Eric Andre, host of the the twisted talk show The Eric Andre Show on Adult Swim. The video barely fits the song, which is a serene and meandering jazz composition dedicated to Thundercat’s pet cat, Tron.

Ty Segall pushes his gnarly garage aesthetic into fascinating new territory with "Manipulator." His sound is taking on an all-new glam psychedelic vibe and he's put serious effort into crafting the visual style to embellish it.

The "Manipulator" video was released in two forms. One is an interactive video, where viewers can click elements of the video to create wild collage sequences. The other is a straight YouTube version, which is essentially a video of the director playing with the interactive flash himself. The video really brings Segall's lo-fi glam to life — it's a joy to watch.