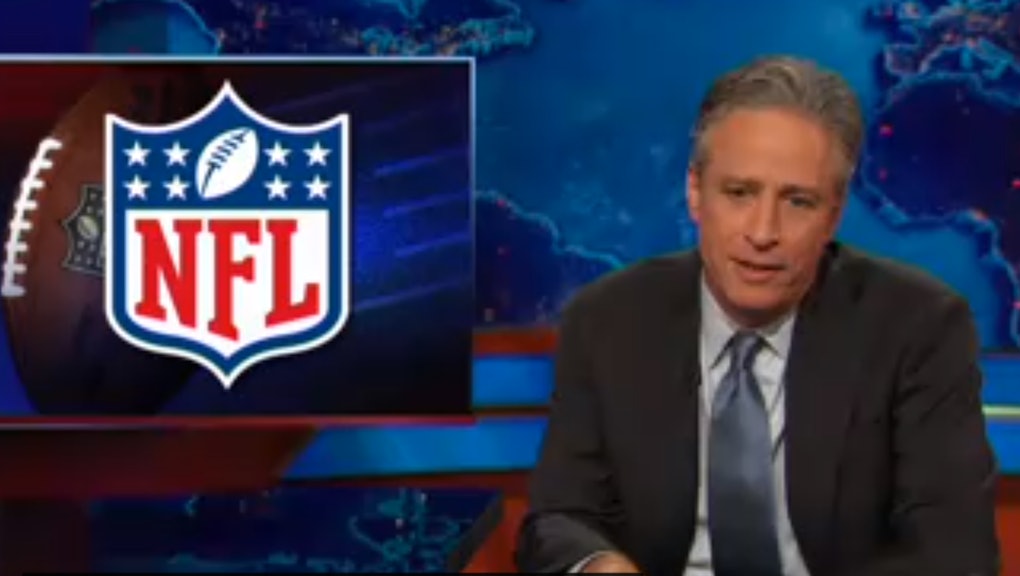 There are so many wrong things happening in the NFL that Jon Stewart had enough fodder to pick on the league for a second straight week.

After the Daily Show host ripped America's most popular sport last week for its handling of the Ray Rice case, Stewart was back Wednesday to take down the moral superiority of NFL commissioner Roger Goodell, the indecisions of the Minnesota Vikings and the bad behavior of Greg Hardy and Adrian Peterson.

"The National Football League used to have a good name," he started ironically before whipping the league for its unprecedented public relations quagmire during the 10-minute segment. A series of clips dubbing the NFL a horrible institution followed, climaxing with Stewart's Star Wars callback: "You'll never find a more wretched hive of scum and villainy."

After mocking Rice's initial two-game ban following a video showing him beating his now wife as Old Testament-style justice, Stewart moved on to the back and forth on Hardy's domestic violence charges: First there wasn't a suspension, then a perfunctory one-game benching (with the option to watch from the sidelines), before the Panthers declared they're done with him — but only until he appeals his domestic violence conviction.

He ribbon-tied this portion with the biting one-liner: "It's the kind of firm decision-making we've come to expect from people who don't know what the fuck they're doing."

Stewart then takes a shot on the NFL's decision to bring in four women, including a former sex-crimes expert, to look at the league's domestic violence efforts: "You know your business model is in rough shape when you have to appoint your own in-house special victims unit."

But the most uproarious punchlines are reserved for Peterson, the former MVP who released a statement saying, "I'm definitely not a child abuser," after being arrested for hitting his son.

"You beat a 4-year-old with a tree branch," Stewart said about Peterson. "Here's a tip for any pro football players out there, curious as to whether or not they may be child abusers: You can't do something to a 4-year-old that you are not allowed to do to a 300-pound lineman in a helmet and pads."

And at the Vikings' reversal of their decision to keep Peterson active once the NFL's beer partner Anheuser-Busch delivered a strongly worded statement, Stewart had this to say: "How crazy is this? A company that sells alcohol is the moral touchstone of the NFL."

"You need time to make sure you get this right?!" Stewart said paraphrasing a report on Peterson. "A 220-pound running back left railroad tracks on a 4-year-old's leg! This ain't Fermat's Last Theorem!"

The finale takes shots at a familiar Stewart target: "Oh, Seanny (Sean Hannity), don't you worry ... your special brand of spiteful ignorance will always be legal" — at the conservative commentator's remarks saying there could come a time when liberals would want to make it illegal for a parent to tell their child that "being gay is not normal."

But the homophobic views give Stewart the perfect ending. He reminds us of the time earlier this year when there was so much speculation about how the league would receive a gay football player.

"Remember those days?" Stewart says. "Oh, what the NFL wouldn't do right now for that kind of distraction!"