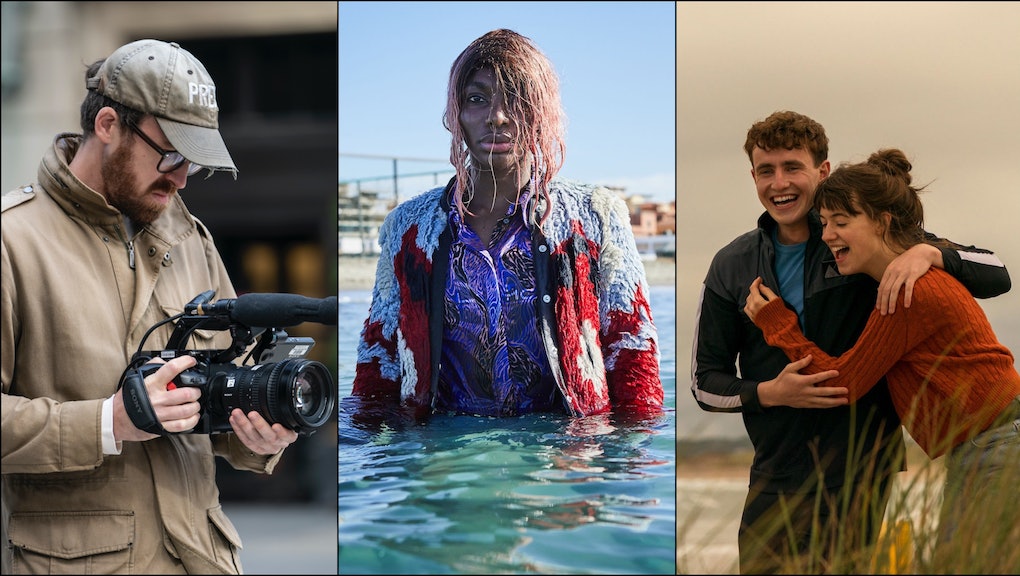 People have been saying we’re in the “golden era of television” for years now, but the pandemic made the comfort and escapism of good TV an absolute necessity in 2020. In the halcyon days of January, back when we were hooked on an outlandish reality show about strangers in “pods” getting hitched sight-unseen, who could imagine that a drama about chess would be sustaining us through the isolation of quarantine come fall? Suddenly, all sorts of typical diversions (going to the movies, traveling, attending a party, eating out) were hazardous to your health. Most people realized the safest place to ride out a pandemic is on the couch.

Quarantine also collided with the streaming wars, and the emergence of so many competing services means viewers these days have a near-endless supply of shows to watch. A whole year ago, we were decrying there was too much to possibly stay on top of it all. This year, there was even more — and thank goodness. We needed it. Without further ado, here's a roundup of the TV series that provided some respite from the drudgery and despair of 2020.

I didn’t know I needed an ahistorical, comedic retelling of the rise of Russia’s Catherine the Great until Tony McNamara delivered it to Hulu this spring. The Great is at once ridiculous and horrible — I'll never rid those beheaded Swedes from my mind’s eye — and at the same time, deeply compelling. In her first comedic role, Elle Fanning projects power and cunning as the titular queen, as she plots a coup against her boorish husband, Emperor Peter III. As played by Nicholas Hoult, the young ruler is a man-child with an insatiable craving for sex and violence. It may not be a historically accurate take on Catherine’s rise to power, but The Great skillfully refracts the past to examine more modern themes. —Kara Weisenstein, Culture Writer

I May Destroy You (HBO)

It's hard to imagine a show that felt more now than HBO's universally celebrated I May Destroy You. Created and written by Michaela Coel, who also stars as Arabella, an influencer-turned-novelist in London, the series takes on from-the-headlines topics like sexual assault, race, and social media. Coel uses the 12-part TV drama format to tell an artful, nuanced story about relationships — romantic, platonic, professional, familial, casual — that's drawn from her own harrowing experience as a survivor. In one pivotal scene Arabella asks, about the untold numbers of abused women in the world: “Can my shout serve their silent screams?” There isn’t an easy answer, of course. But the sound Coel has made with I May Destroy You — so brilliant and so piercing — is impossible to forget. —James Yeh, Culture Editor

People really weren’t feeling The Great British Bake Off this year — credit the adult baby guy (Matt Lucas) who replaced Sandi Toksvig, an uninspired final three, or the encroaching pandemic. But luckily there was The American Barbecue Showdown, sitting just outside the frame. Netflix’s first great earnest cooking competition was a calming, aromatic series, filmed early enough to avoid the charade of normalcy in a world that delivered anything but. It was easy to get swept up in the oddities. One second, you’re feeling emotional as a contestant talks about competing to honor his dead friend, Big Worm, and the next, oh, he’s cutting off the sleeves of his shirt to cool down. And then, like every other contestant, he must wear the same shirt in every subsequent episode. Perhaps it’s the extensive time required to pull off a great smoke, the novelty of seeing raccoon and alligator barbecued, or the mutual affection these contestants seem to harbor in a short time frame, but The American Barbecue Showdown was a true panacea. —Shawn Cooke, Culture Writer

I had no idea what The Duchess was about when I started watching it on Netflix, but it didn’t disappoint. The British comedy/drama was created by comedian Katherine Ryan, who also stars in the six-episode series. Ryan, who originally hails from Canada, plays a foul-mouthed single mother with a wardrobe that could almost rival Carrie Bradshaw. Her messy love life and her witty pre-teen daughter made for lots of unexpected laughs. —Erica Euse, Culture Writer

We probably didn’t need any extra heartbreak during this long, hard year — but alas, the doomed love story between Marianne and Connell in Hulu’s Normal People proved impossible to resist. The story is exquisite, because it paints a portrait of two young people growing into themselves, while passing in and out of one another’s orbit. It’s terribly realistic, which is what makes the thrills and crushing disappointments of their love affair so compelling. Normal People also introduced actor Paul Mescal as an object of everyone’s quarantine thirst — get a look at the short-shorts and simple chain he wears as Connell and tell me that’s not hot. Sally Rooney's original novel, on which the show is based, is spare and direct in its prose style; it focuses the story on the complex dynamics at play between the lovers. The author helped adapt her book for the screen, but director Lenny Abrahamson’s rich cinematic world elevates the tale by making it a rich visual experience, too. —K.W.

How To with John Wilson (HBO)

As a non-New York resident, I almost reflexively roll my eyes at romantic film portrayals of the city. Despite deep affection for the place he calls home, filmmaker John Wilson seems to get this, casting a gaze on the Big Apple with equal parts skepticism and curiosity. How To with John Wilson becomes special for this worldview, lyrically portraying the little ways all cities tend to become unlivable or inconvenience their residents — along with so many reels of dog shit — and his droll, stilted voiceover delivers the perfect punchlines. Everyone we meet, even if it’s just for a few moments, like the foreskin restoration guy or his adorable landlord, leaves an indelible mark. He knows how to engineer profundity from this disparate footage and odd characters, but How To becomes unlike anything else on television when Wilson wisely lets his subjects just wander off on their own tangents. —S.C.

Much like last year's Watchmen, this fall's Lovecraft Country was alternate-history sci-fi with an absorbing mythology behind it. In this case, the conceit of the show is magic and monsters lurking alongside the evils of racism in Jim Crow-era America. I felt like I learned a lot, but the series also totally scared my pants off. —K.W.

After spending my teen years on a competitive cheerleading squad, there was nothing I loved more than binge-watching Cheer. The docuseries brought Bring It On to real life as it explored the lives of the cheerleaders on the Navarro College Bulldogs Cheer Team in Corsicana, Texas. The show documents all the over-the-top drama and stress the team endures as their stern, but loving leader, Monica, preps them for the cheer finals in Daytona. By the last episode I was pacing around, sweating, and yelling “stick it” at my television. It was an emotional rollercoaster that I would gladly ride again. —E.E.

Director Luca Guadagnino’s television debut gifted us an unexpected delight this fall. We Are Who We Are centers on American teenagers living on a military base in Italy circa 2016. Jack Dylan Grazer plays Fraser, an angry young alcoholic working through his sexual awakening and being uprooted from his beloved New York City. Chloë Sevigny delivers G.I. Jane-realness as his mother Sarah, the newly appointed colonel overseeing the base. Jordan Kristine Seamón plays Caitlin, another teen on base questioning her gender identity. It’s a stacked, talented cast — rounded out by Martin Scorsese’s daughter Francesca and Kid Cudi, no less — and We Are Who We Are has the feel of a dreamy ensemble drama, interspersed with gorgeous cinematography of the Italian coast. —K.W.

It's funny how a global pandemic and a fraught election can sideline societal worries about omnipotent tech companies making us all slaves to A.I. in the near-future, or whatever. Early in quarantine, however, Hulu delivered Devs, a mind-boggling and heart-pounding sci-fi drama about what happens when Silicon Valley develops a god complex. Actress Sonoya Mizuno sparkles as Lily, the developer on a quest to uncover the shady goings-on at Amaya, a quantum computing company. And Nick Offerman is haunting in a rare serious role as Forest, the founder of the fictional tech behemoth. —K.W.

Never Have I Ever (Netflix)

Netflix coming-of-age stories have become my guilty pleasure. I did not expect to love Never Have I Ever as much as I did, but it was such a delight to watch. Created by Mindy Kaling and Lang Fisher, the comedy was actually based on Kaling’s youth in Boston. Starring first-time actor Maitreyi Ramakrishnan, it depicted the highs and lows of being a teenager in a beautiful and relatable way that will make you laugh, cringe, and cry a little. Not to mention, it was a win for Asian representation in Hollywood, offering a long-overdue cast of dynamic South Asian characters. —E.E.

One of the most beautiful, affecting shows of the year was Unorthodox, based on Deborah Feldman's true memoir about fleeing her ultra orthodox Jewish community. The TV adaptation introduced American audiences to Israeli actress Shira Haas, who brought quiet power to her portrayal of Esty and nabbed an Emmy nomination for her efforts. —K.W.

What a delight. The Flight Attendant landed on HBO Max just as we really settled in for the colder months, delivering a whodunit caper with a complex heroine, deftly played by Kaley Cuoco. As party-loving, perpetually drunk Cassie — the titular flight attendant who wakes up in a hotel room with a dead man and no memory of what happened — Cuoco officially transcends her TV roots on The Big Bang Theory and shows us she's worthy of far better material. —K.W.

Who would've guessed Netflix's biggest hit would be a series about chess? But much like TikTok has sparked a spike in roller-skate sales, the popularity of The Queen's Gambit inspired a surge in the purchases of chess sets. What's even cooler is that the series gets a lot of things right about the game, according to actual female chess stars. There's one notable thing The Queen's Gambit glosses over, however: Even prodigies lose a bunch before they start winning, the women said. But losing doesn't make for great TV, alas. —K.W.

More like this
Steve from 'Blue's Clues' gave us the closure we didn't know we needed
By Kara Weisenstein
Live from New York: Revisiting the totally bonkers era of post-9/11 'SNL'
By Rafi Schwartz
It never really was about blood or Satan when it came to Lil Nas X hate
By Joshua Topolsky
Stay up to date