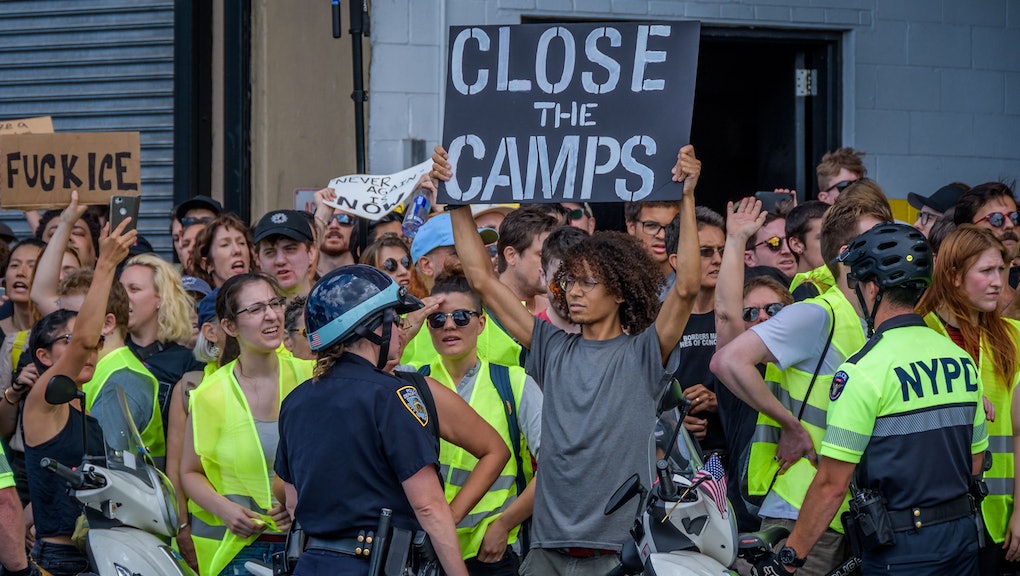 The coronavirus has caused more than 2,500 deaths, and it's still not at its peak. Calls to continue social distancing have prompted federal judges to look into vulnerable populations for whom that isn't possible, like those incarcerated in jails or immigration detention facilities. Now, the Trump administration is facing increased pressure to free migrant children in particular.

Judge Dolly Gee out of the U.S. District Court in Los Angeles singled out the Health and Human Services Department and Immigrations and Customs Enforcement. Over the weekend, she called for the agencies to either release migrant children or explain why they are still being detained.

The agencies have until April 6 to "provide an accounting of their efforts to release those in custody," per The New York Times, and April 10 to appropriately explain why the children must still be detained. Otherwise, Vox reported that Gee will order the government to release the roughly 3,400 children in HHS custody, and the hundreds more in ICE detention facilities.

Gee is drawing from a 1997 ruling known as the Flores Agreement to make her order. The Flores Agreement set a 20-day limit for holding migrant children and required they were kept in safe and sanitary conditions the whole time. Although the agreement had been violated before the Trump presidency, his administration is notable for attempting to end it altogether.

All of this is happening because four migrant children in HHS facilities in New York tested positive for coronavirus. In a petition, the plaintiffs' lawyers wrote, "The threat of irreparable injury to their health and safety is palpable." Not only are these children at risk themselves, but they could also spread coronavirus to other kids in the facility, given the often tightly packed conditions in these detention centers. In addition, anyone who works there could easily become a carrier for the virus.

Gee made the ruling, which gives the Trump administration just over a week to respond, instead of signing an order to free all migrant children immediately because of travel restrictions that would make it difficult to move the children to another location, The New York Times reported. In addition, children can't be released to nobody, and so suitable sponsors — ideally, a family member — would need to be located first.

The Trump administration has a long history of harming migrant children. The "Remain in Mexico" policy sent thousands of children to wait indefinitely in Mexico until their asylum cases could be heard and put migrants at risk for kidnapping. The administration also released thousands of families onto the streets across the Southwest while providing no resources.

There are also plenty of cases of migrant children who have died in federal custody due to lack of adequate care. For example, Kevin McAleenan, the former acting homeland security secretary, once confirmed that every child in CBP custody did not have access to a pediatrician.

This has resulted in children dying from diseases that have historically been much less fatal than coronavirus, which is currently ravaging the U.S.. One 16-year-old died was essentially left to die by Customs and Border Protection agents last May.

“Children are not like adults. They get sick more quickly and each hour of delay can be associated with serious complications, especially in cases of infectious diseases. Delays can lead to death,” Dr. Julie Linton, co-chair of the immigrant health special interest group at the American Academy of Pediatrics, told NBC News.

Coronavirus presents new and immediate risks not only for migrant children, but for anyone in federal custody. Immigrants in ICE facilities have started protesting, including making videos to highlight unsafe conditions. Last Tuesday, ICE reported its first confirmed case of the coronavirus in a 31-year-old migrant held in New Jersey, confirming immigrant advocates' worst fears.

On Monday, a federal judge in Washington, D.C., expanded Gee's order to apply to the parents of migrant children, too. But for many, these orders are just the beginning, as protesters in states like Minnesota, Maryland, New Jersey are calling for ICE to release everyone held within their facilities.