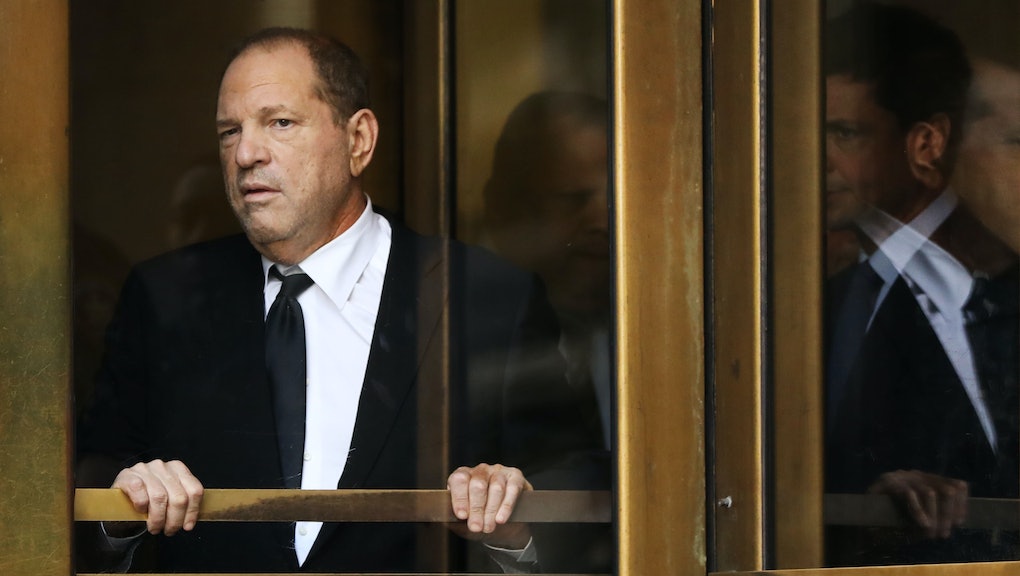 A federal judge in New York rejected a proposed settlement that would have resolved the sexual misconduct cases against Harvey Weinstein, because he deemed its terms were unfair to victims and would’ve offered legal and financial protection to the convicted predator. U.S. District Judge Alvin Hellerstein called parts of the proposed $46.8 million settlement agreement “obnoxious” during a 20-minute hearing on Tuesday and threw it out wholesale. So where does this leave the various Weinstein cases and the process of justice being served? It’s a little complicated, but today’s news is ultimately a positive development for Weinstein’s victims.

Firstly, here’s a refresher on where the various cases against Weinstein stand. He’s currently behind bars in upstate New York, at the maximum security Wende Correctional Facility, where he’s serving 23 years in prison following his February 24 conviction of third-degree rape and forcible sexual assault of two women. He still faces criminal charges in Los Angeles, too; in early January, prosecutors charged Weinstein with raping a woman and sexually assaulting another in separate incidents over two days in 2013.

The settlement currently in question relates to the numerous civil cases brought against Weinstein. The proposed payout would’ve resolved nearly all the fallen movie mogul’s lingering legal issues — everything from his remaining debts to creditors from the Weinstein Co. bankruptcy to the multitudinous class action claims of sexual misconduct — all paid for by insurance money. The agreement included a nearly $19 million victims’ fund, to be divvied up amongst all the class-action claimants. But the settlement omitted any admission of wrongdoing by Weinstein and his associates, and even provided for a $1.5 million defense fund to cover the cost of future suits from accusers who did not participate in the settlement — again, funded by insurance companies, not Weinstein.

The proposed settlement was backed by New York Attorney General Letitia James, who’d celebrated the agreement as a “win” for all victims of sexual harassment. But the women themselves were disappointed by the terms. Many of them backed the settlement partly because they didn’t want to block other victims from getting some recompense, however meager. “I don’t love it, but I don’t know how to go after him,” actress Katherine Kendall, one of Weinstein’s many accusers, told the New York Times. “I don’t know what I can really do.”

Aside from the protections the settlement offered Weinstein, the judge objected to treating plaintiffs’ claims as a class action suit. “Not every woman was captured in the same way,” Hellerstein said. “Some gave up their bodies because of blandishments [...] some by force, and some may have done it willingly. And yet your settlement creates an equality.” Under the terms of the agreement, a third party would’ve evaluated each woman’s claim and assigned a monetary value. “I don’t see how I could delegate that responsibility to someone who is not a judge,” Hellerstein said. “There is no way I would approve a delegation for that suit. Zero.”

Hellerstein’s ruling leaves the attorneys working on the Weinstein case back at square one, in many senses. The judge struck down the basic foundations of the deal, making it unlikely lawyers would be able to modify the settlement terms and bring it back for approval. Attorneys handling the Weinstein Co. bankruptcy case had hoped to wrap up a liquidation plan by the end of 2020, and the judge’s ruling is a major setback in the process. But Hellerstein doesn’t seem to give a hoot that he’s thrown a wrench in the Weinstein case. “The idea that Harvey Weinstein can get a defense fund ahead of the claimants is obnoxious,” he said in court on Tuesday. “The idea you can regulate the claims of people not in the settlement — I can’t subscribe to that.” The powerful people doling out justice on behalf of Weinstein’s victims haven’t been afraid to bring the hammer down hard on the predator, and that’s a really good thing.

More like this
'Dr. Death' clings to the wrong part of a true story
By Chloe Stillwell
Phoebe Bridgers and John Mulaney announced tour dates and the internet imploded
By Chloe Stillwell
This couple's gender reveal stunt started a deadly wildfire. They're now facing 20 years in jail
By Joseph Lamour
Stay up to date