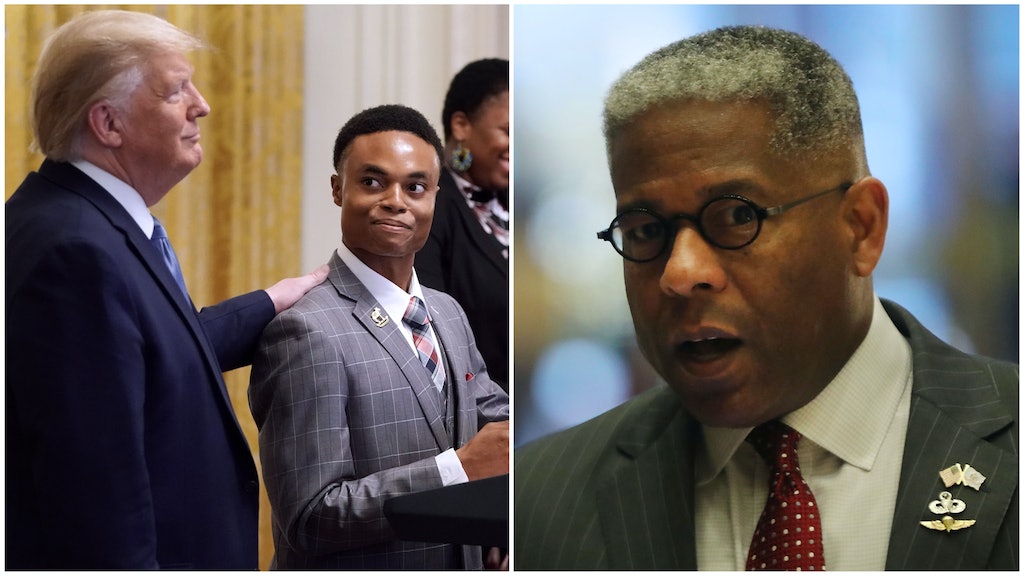 A meditation on Black Republicans' hairlines

It takes effort to turn the might of Black hair from luscious to atrocious, so an unfortunate haircut or style is very noticeable to me and most of my community. And we like to point it out, too. That’s why a ubiquitous rumor about a small subset of our people persists: That you can spot a Black Republican by their tragic hair.

If you think I’m being too harsh by stating that the only Republican with non-tragic hair is Tim Scott (because he’s bald), just Google “Black Republican hair” and you’ll see for yourself. Whether you’re a pundit offering a differing view, or a conservative not invited to speak at last year’s Republican National Convention (but certainly at the Black Leadership Summit, as Ben Okereke is in the image above), Black conservative hair is more often than not a steaming hot mess, an uneven hairline, or a choice unbecoming of the head it inhabits. While this has been an ongoing joke, there is logic behind it — and it could sometimes involve self-hatred. Other times, it's just Black hair ignorance due to lack of experience.

See, it's challenging to know what your hair should actually look like if you don’t hang around other Black people. I am not a barber nor a hairstylist, but most Black people can tell when a compatriot needs a treatment, a comb, or a shape up. And that’s why there are so many of us who lambast David Clarke’s tacky-as-his-humor beard and other hair choices like it so often.

Another example of a mishap in both grooming and criticism can be found in the time Candace Owens decided to go in on Cardi B. Owens used racist tropes and words to comment on Cardi and her interviewing style with Joe Biden (because being being down-to-earth is not an adorable quality to some people). Her subject, our President-elect had no problem with Cardi. But Black Twitter had a big problem with Owens. And they went after an easy target — Owens’s unfortunate hair.

I believe the initial clowning on Black Republican’s hairlines launched into a much bigger portal of humor because of the underlying implications about their purposeful and often hurtful distancing from “regular” Black people. See, the hair salon and the barbershop are well-known as unifying public spaces for the Black community. But they’re also a symbolic and significant safe space where discussions amongst those who share the same skin and experiences happens.

And much of the time, the discussion turns to politics. Could our conservative brothers and sisters be avoiding those spaces like they avoid CNN or ample seasoning on their chicken? Or, are they getting their hair done by a stylist who has mostly non-Black clientele? Because, beloveds, that would explain this:

Let me dig into the logistics that gives context to the clowning. As you might imagine, the Republican Party is mostly white. The few Black folk that are present are few and far between. In fact, 1996 to 2016, only 7% of registered voters who are Black registered as Republican according to Pew Research. That contrasts starkly with 87% who are Democrats.

And according to FiveThirtyEight, Black people, even when they have conservative values, sometimes still are registered Democrats, which is indicative of a party Black people seem to be trying to avoid. I know when I’m in a public space or work environment and I’m the only Black person, I feel lonely. I cannot imagine having that be my daily reality in every space. It seems as if that the lack of peers — people with similar hair texture — leads to choices that could easily have been avoided or nudged elsewhere by another Black person.

Black Republican hairlines are hilarious but also indicative of a bigger, more poignant point: The entire party needs an overhaul, and perhaps group therapy. I’m not generally one to disparage people’s physical appearance. But Black republicans, neither hairstyle nor beliefs are the same as a face — you can change your hair and your confused politics. You can come back to the barbershop.

More like this
The Sarah Baartman Effect: How Black women's bodies are still both exploited and revered
By Rokeshia Renné Ashley
Steak-umm, the social justice warrior no one asked for, tweets fire once again
By Joseph Lamour
The travel industry still ignores people with disabilities
By Brian Garrod
Stay up to date