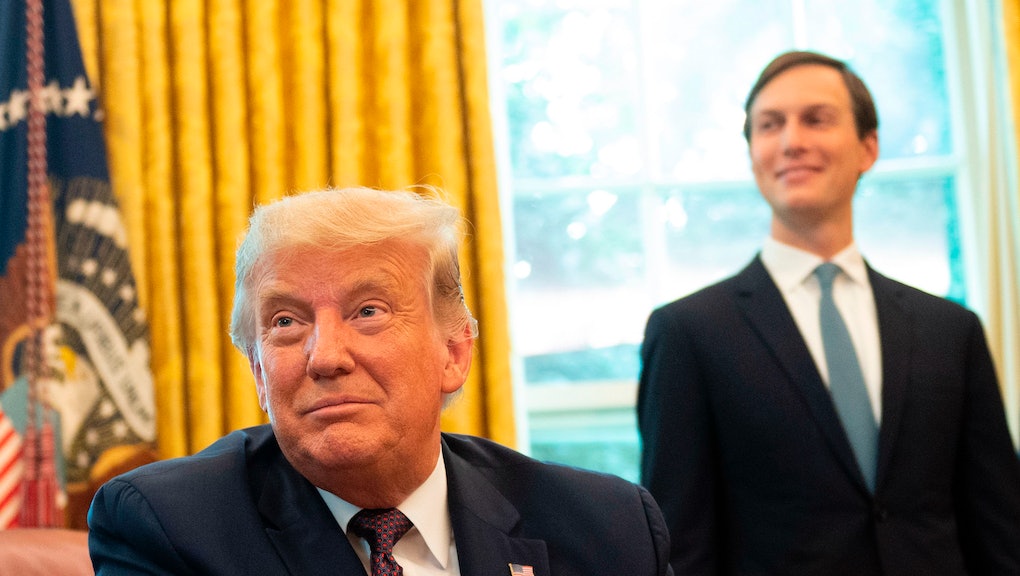 That the Trump administration has, in ways both grand and subtle, absolutely botched the federal government's haphazard — and, at least initially, extremely half-hearted — response to the coronavirus pandemic is largely beyond dispute. With that in mind, it's perversely refreshing to realize there's still room to be horrified by just how inept, incompetent, and utterly heartless the White House's COVID-19 plan truly was.

In an exhaustive new Vanity Fair feature detailing the administration's cavalcade of ultimately useless behind-the-scenes pandemic machinations, Jared Kushner is shown presiding — at one point in a literal high chair — over an increasingly scattershot series of initiatives. The first son-in-law was seemingly guided by an unshakable faith in the most cutthroat definition of free market capitalism, even as actual free market capitalists begged him for some sort of coordinated government intervention.

"The federal government is not going to lead this response,” Kushner allegedly told a group of business leaders who had gathered to plead for the president to simply tell them what the administration needed from them to help fight the pandemic. “It’s up to the states to figure out what they want to do."

When faced with the fact that certain states were absolutely floundering in their responses, Kushner was even less caring.

"[New York Gov. Andrew] Cuomo didn’t pound the phones hard enough to get PPE for his state," he reportedly told the group. "His people are going to suffer and that’s their problem."

While Kushner, in this very specific instance, may not have been entirely wrong, his deeply callous "let them eat cake...assuming they can find and purchase it at whatever exorbitant price the free market deems appropriate" attitude belied a deeper problem in the Trump administration's pandemic response: No one really had any idea what they were doing.

"Kushner is at a loss for how to stall what is happening, so he’s doing the classic ‘analyst punt,’” journalist Duff McDonald, an expert on corporate consulting firms, told Vanity Fair, “[He's] going to his pals at McKinsey instead of people in the Deep State who can do their jobs today. These are people who think, If you have a quantitative grasp, you can manage anything. I have no doubt that they’re telling Kushner he’s a genius as well.”

Kushner's reliance on outside "experts" (both actual and not) has hardly been a secret during the past few months of the pandemic. Keep in mind that this is the same person who reportedly asked his sister-in-law's father to poll his Facebook friends about what the heck this coronavirus thingy is, anyway. The president, meanwhile, has staggered aimlessly from one quack cure to another to another, at least in part inspired by whichever random personalities cross his Twitter feed on any given day ("I thought her voice was an important voice," he said about Dr. Stella Immanuel, one of the proponents of using Malaria drug hydroxychloroquine to fight coronavirus, despite no conclusive medical tests affirming this. (She also reportedly believes in "demon" sperm and alien DNA)

Still, as America nears 200,000 people dead in less than a year of the pandemic, it's worth looking back on the past few months of administrative screw-ups and overconfident self-congratulations as a reminder of what could have been. It didn't have to be this way. We can, if we look (not-so) hard enough, see exactly where things went disastrously wrong.

More like this
Pfizer's CEO just admitted we'll all probably have to get a 3rd coronavirus shot
By Rafi Schwartz
Jailhouse lawyer Johnnie Cook is fighting for pandemic justice
By Mai Tran
New York has set aside a massive, first-of-its-kind fund for undocumented workers
By Rafi Schwartz
Stay up to date