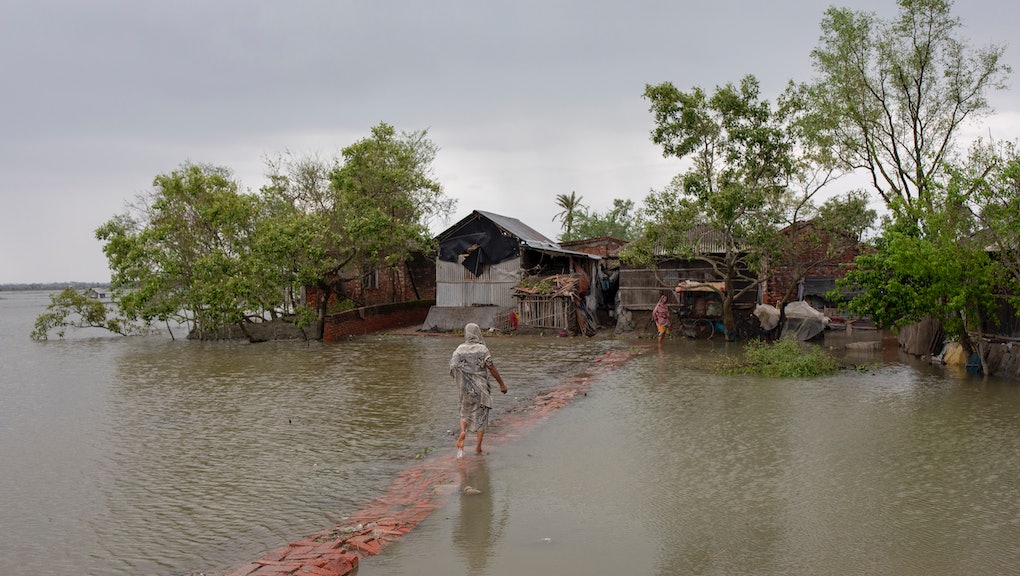 Climate change is an ever-increasing factor in global migration, as rising sea levels and extreme heat force people out of their homes in search of asylum in safer countries. This has been a known issue for years, but has now been acknowledged by the UN in the latest Global Trends report published by the United Nations High Commissioner for Refugees (UNHCR). The paper says that increasingly hostile climates are contributing to the forced displacement of people through events such as extreme weather destroying homes; droughts exacerbating food scarcity; and changes in ecology that diminish ways for families to make a living. These environmental changes most severely impact the most vulnerable and poorest citizens around the world, who often lack protection and safety from their governments.

Those forced to leave their homes because of climate change are often referred to as "climate refugees," although the UNHCR website states that the organization does not endorse the term. Though the United Nations has already qualified displacement resulting from climate change as grounds for asylum, including the changing climate as a contributing factor to migration in the Global Trends report on refugees is another big step toward recognizing it as a rapidly growing problem.

"The interplay between climate, conflict, hunger, poverty and persecution creates increasingly complex emergencies," wrote the UNHCR in a summary of the report. "For example, food insecurity may become a major driver of conflicts and displacement."

The report states that at least 100 million people were forced to flee their homes within the past 10 years, a number that has nearly doubled since 2010. 80 percent of those refugees are in countries struggling with food shortages and under threat of climate-related disasters. It's a situation that's of particular concern to the UNHCR, spokesperson Kathryn Mahoney told Earther.

"The reality is that climate change is forcing people around the world to leave their homes and even their countries," Mahoney said. "We've been working on displacement issues linked to climate change and disasters for many years, and we have long seen firsthand the devastating impact on people uprooted from their homes."

Leaving their homes doesn't always offer long-term solutions for displaced populations, either. According to the Global Trends report, 2019 saw about 11 million newly displaced people by the year's end. 2.4 million people looked for protection outside of their home country. 8.6 million moved to a different area within their home countries.

Of the people who left their countries of origin, only 317,200 were able to return; 107,800 ended up moving a third time to another country. Of the millions who moved to a different place within their home country, 5.3 million were able to return to their homes — however, the report noted, the sustainability of the returners' safety and livelihoods weren't guaranteed given the continuing instability of their homeland.

"We are witnessing a changed reality in that forced displacement nowadays is not only vastly more widespread," stated Filippo Grandi, Commissioner of the UNHCR, in a press release, "but is simply no longer a short-term and temporary phenomenon."

In just the past 10 years, earthquakes in Haiti, floods in Pakistan, typhoons in the Philippines, hurricanes in the Bahamas, and cyclones in Mozambique have displaced millions of people that prompted assistance and action from the UNHCR. As governments failed to adequately rebuild or offer assistance to those impacted by extreme weather events, many of these people haven't been able to return home, turning what could've been a short-term displacement into a permanent one.

Nations all around the globe will need to contend with this crisis sooner rather than later, and the UNHCR hopes its report can help countries formulate a humanitarian plan to handle the matter. Researchers have warned that climate-driven displacement is only going to increase as temperatures are predicted to rise to Sahara-like levels for billions of people within 30 years. Droughts in Central America have driven people northward, toward the U.S. border, as livelihoods and jobs literally dry up. Even the U.S. could see more migration within the country as states reach too-hot-to-handle temperatures in the next 20 years. A retired Australian Navy admiral warned in 2019 that failing to address climate change could threaten global security and break down nations by increasing civil unrest caused by displacement and food scarcity. The National Resources Defense Council stated in 2019 that mass human migration was already happening.

It's a problem these organizations hope nations will address together to help keep people in their homes. There has to be a long-term solution towards increasing stability in at-risk countries before it becomes long-term displacement — something hiding behind big, black walls will never solve.

More like this
Amid daily reports of catastrophe, Americans are finally starting to realize climate change is bad
By AJ Dellinger
This is what it looks like when a city floods in real-time
By AJ Dellinger
Plastic Free July is the perfect opportunity to kick our pandemic habits
By AJ Dellinger
Stay up to date