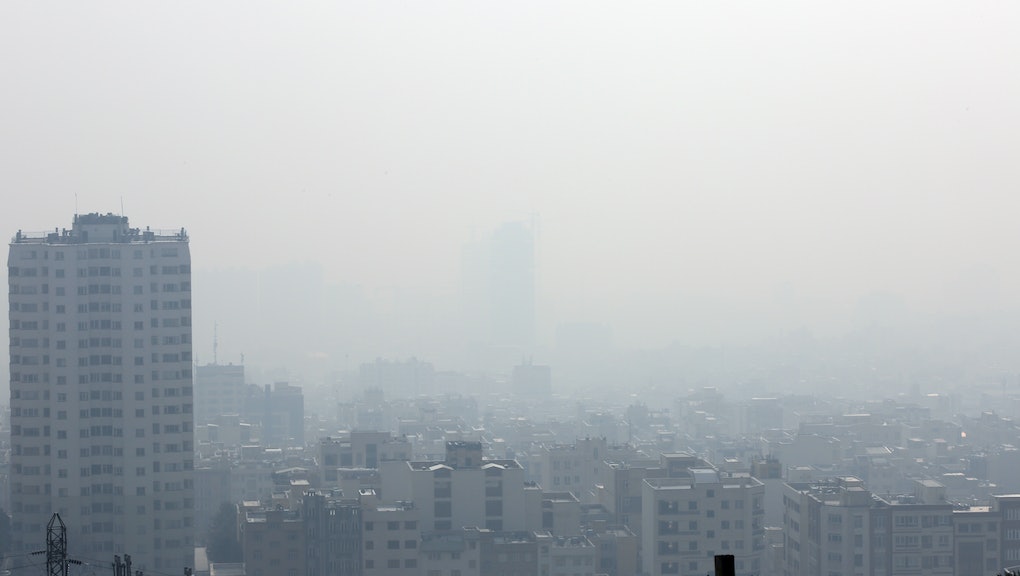 We know that climate change will have adverse and irreversible effects on the planet, but what is it doing to us? As we continue to pump carbon dioxide and other greenhouse gases into the atmosphere, we aren't just chipping away at the health of the Earth — we're also damaging our own mental health. New research published this week by the Guardian shows that air pollution and other things that degrade our quality of life may also lead to an increase in rates of depression and suicide.

The research looked at air quality studies from 16 different countries, which includes data that covers a more than 40-year period of time. What it revealed was a statistical link between the increase in air pollution and populations experiencing depression and other mental health conditions. In particular, air quality dropping correlates to an "extremely high mortality" in people experiencing mental health disorders.

Air pollution is also connected to a quadrupled risk of depression in teenagers and young adults — who already deal with increased health risks associated with pollution and climate change. In some cases, the risk of suicide was found to be a short-term effect, something that people experience when encountering an increase in air pollution. But living in a place with an elevated rate of air pollution was found to lead to as much as a 10 percent increase in the likelihood of experiencing depression.

It's worth noting that the research shows correlation but not necessarily causation between mental health and air quality. However, we already know that air pollution has adverse effects on the human body far beyond what we had ever imagined.

Toxic air undoubtedly hurts our lungs and can harm the brain development of young people. But the effects run much deeper than that. Earlier this year, research published in the Chest Journal revealed that air quality has an impact on just about every part of our bodies, from our vital organs down to our every cell. Researchers found that worsening air quality is linked to increased occurrences of heart and lung disease and can lead to increased risk of diabetes, liver failure, and bladder cancer. Toxic air can even erode the health of our skin and skeletal structure, leading to brittle bones that break more easily.

The reason for this full-body impact is because the ultrafine particles that are found in polluted air are sucked into our lungs and deposited into our blood stream, where they are exposed to basically every last cell in our body, per Chest Journal. The result is negative health impacts that we would have never expected. In addition to the recent connection between air pollution and depression, previous studies have linked an increased likelihood of experiencing dementia to air quality. If there is a part of our body or our very existence than air pollution doesn't touch, scientists and researchers have yet to find it.

None of that bodes particularly well for us, as we are living through a period of time during which air quality is getting increasingly worse. For the first time in a decade, air pollution got worse in the United States last year — the result of policies implemented by the Trump administration and a spate of forest fires. The result has been increasingly poor air quality, particularly for communities of color that live near factories and power plants that emit large amounts of harmful gases and fine particulate matter that can be damaging to our lungs and bodies. It is projected that air pollution may have played at least some role in as many as 30,000 deaths in 2015 in the U.S. alone — and the rest of the world isn't doing much better.

Australia is being plagued by massive bush fires that have degraded the air quality across the country, leading major cities like Sydney to experience record levels of air pollution as the fires continue to burn. In India, air pollution has turned into a public health crisis, with levels of pollution so bad that it has actually broken the scale that is used to measure such things. The conditions have forced cities within the country to undergo dramatic actions, including banning as many as half of all vehicles from using the roads to cut down on the amount of emissions being produced during the day.

Air quality is an international issue that spares almost no one. The World Health Organization estimates that 92 percent of people on Earth are breathing polluted air on a regular basis — a result of our ongoing reliance on fossil fuels. It is an issue that knows no limits when it comes to region, economy or lifestyle: if you live basically anywhere on the planet, you are likely to be breathing things like sulfate, nitrates and black carbon — the most common forms of air pollutants.

The link between air pollution and depression is just the latest indicator that climate change and the human-caused carbon emissions that contribute to it are taking a toll on our mental health. Earlier this year, the Canadian Medical Association and Canadian Public Health Association released a report that showed a connection between the effects of climate change — including everything from rising temperatures to lack of food security caused by damage done to crops — to depression, anxiety, and stress disorders. The American Psychological Association warned in 2016 that exposure to extreme weather events linked to climate change can result in increased feelings of anxiety, depression and post-traumatic stress disorder. Earlier this year, the World Health Organization found that we are greatly underestimating the mental health toll of climate change and found that many governments are completely unprepared to deal with these effects. Essentially, if we do not reverse course on climate change, our quality of life will diminish.

If there is good news to be found from the latest research, it's this: Given that air pollution was not previously known to affect mental health, it's all the more motivation to address it. Researchers estimate that if we can improve air quality to the same levels mandated by the European Union, we could lower the likelihood of experiencing depression for millions of people around the world. They suggest that as much as 15 percent of the population could be spared from these negative mental health outcomes.