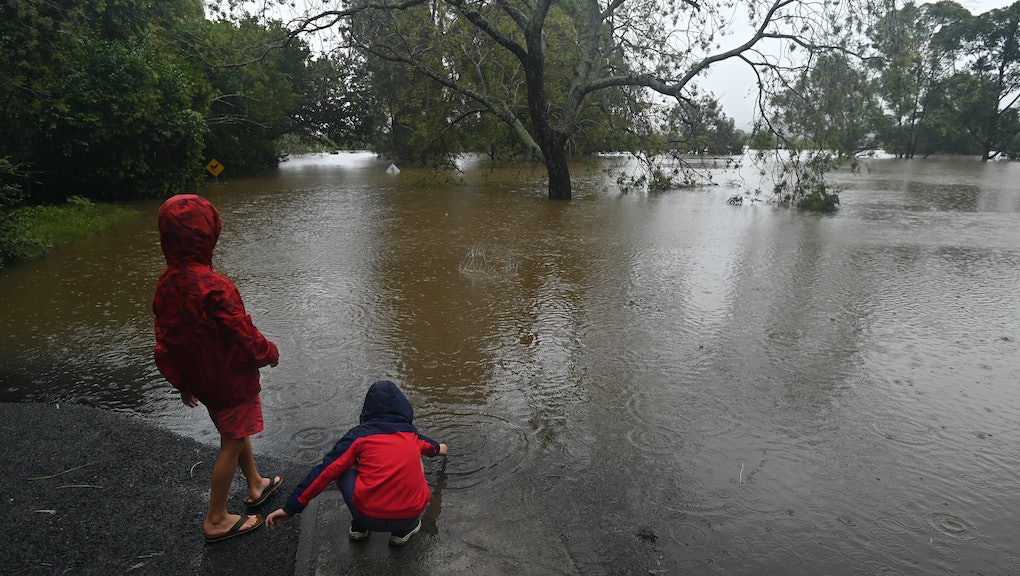 After a year of historic drought and devastating, unprecedented wildfires, Australia is once again getting hammered by extreme weather. Over the course of the last week, the country has endured the worst flooding that it has experienced in nearly a century. The destructive downpour of water has already forced tens of thousands of people to abandon their homes in search of safety, and things are only expected to get worse this week, with more torrential rains expected through at least Tuesday.

While the storms, which have been ongoing for the last five days, have pummeled much of eastern Australia, perhaps no area has been hit harder than New South Wales, the most populous state in the country. Nearly 20,000 people were evacuated there over the weekend, according to CNN. Gladys Berejiklian, the premier of New South Wales, said during a press conference Monday that 38 locations across the state have been designated as natural disaster areas and 19 evacuation orders have been issued, with more expected to come as conditions could worsen in the coming days. The Australian Bureau of Meteorology reported that more than 16 inches of rainfall have already hit the state, leading to significant flooding.

While no deaths have been reported from the rising water thus far, more than 500 rescue missions have been launched to save people who had their escape cut off by flooded roads. There have been several reports of houses uprooting and floating away, carried off by the unexpected rush of water. At least another inch of rain is expected Tuesday night, according to The Weather Channel, which could lead to as many as 54,000 people being displaced as they seek shelter from the storms.

The torrential rainstorms and resulting floods are unlike anything that Australia has seen in decades. Berejiklian referred to the flooding as a "one-in-100-year event" made worse by the devastating wildfires that Australia suffered last year and the ongoing coronavirus pandemic. "I don't know any time in our state's history where we have had these extreme weather conditions in such quick succession in the middle of a pandemic," she said during a press conference.

Most countries are not equipped to handle one-in-100-year weather events, which are defined as events that have a 1% chance of occurring in any given year. But the weather could not come at a worse time for Australia, which is still recovering from its worst wildfire season in over a century, too. In late 2019 and early 2020, record high temperatures combined with one of the worst droughts in recent memory to create the perfect conditions for wildfires to spread. They did just that, scorching 46 million acres of land, destroying nearly 10,000 buildings including 3,500 homes, and killing more than 1 billion animals. The country is still dealing with the fallout — economic and environmental — from those fires, and now it has a whole new climate change-related crisis on its hands.

Australia's experience with these once-a-century weather events should serve as evidence that extreme weather is getting worse and more frequent, and climate change is to blame. What were once outlier weather events, like the extreme cold in Texas last month, are becoming more common. And we are largely unprepared.

As the planet continues to warm, we will continue to experience more of these types of storms. While climate deniers will do things like point to snow and cold temperatures to try to disprove global warming, Australia serves as an indicator of what we can expect as the planet's temperature continues to rise: extreme weather of all kinds, hot and cold, dry and wet. And the gap between these so-called "100-year" events will continue to get smaller. Addressing climate change can help to hopefully minimize the damage to the planet in the future, but in the near-term, extreme weather is likely here to stay.

More like this
Texas officials responded to the winter storm with propaganda they got from a pro-fossil fuel think tank
By AJ Dellinger
The ocean is about to swallow a climate research facility, which feels fitting
By AJ Dellinger
"Brood X," a plague-level cicada infestation, is coming for us this spring
By Rafi Schwartz
Stay up to date