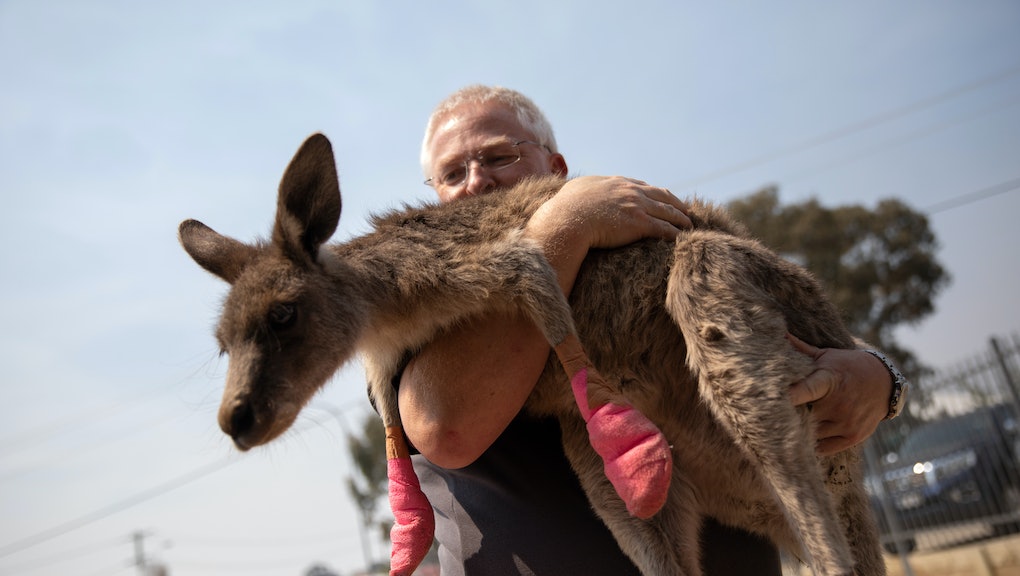 Australia’s fires have devastated the country’s wildlife. What happens next?

The PBS NewHour segment begins with the pained scream of an Australian possum. A veterinarian cools its burned paw in a tray of water before cleaning and thoroughly bandaging the injury. The doctor coos comfortingly to the shrieking animal, and tells the interviewer, with a smile, that its still-bleeding wounds are a sign of recovery. Considering how many other animals have died from the Australian bushfires — now estimated to be close to one billion — it's a much needed sliver of hope for wildlife rescuers and experts.

One billion dead animals is a shocking number to hear, let alone imagine. But it's considered a conservative estimate from ecologist Chris Dickman, from the University of Sydney, who said the continued spread of the wildfires has only devastated more and more creatures.

"That means over 800 million mammals, birds, and reptiles have been affected by the fires," Dickman told The World, an Australian radio broadcast. "Australia-wide, it's probably over a billion," he continued. "I think there's nothing quite to compare with the devastation that's going on over such a large area so quickly. It's a monstrous event in terms of geography and the number of individual animals affected."

Worse yet, the population of many of these species were already threatened or at critical levels before the fires happened. The situation only increases the risk of extinction. As one wildlife expert said to the PBS NewsHour, an "event like this does have the potential to completely wipe them out."

It's a possibility that wildlife conservationists, experts, veterinarians, and rescuers are working to avoid. Clips of Australians supporting their local firefighters and rescuing nearby wildlife have circulated on the internet as people searched for tidbits of much needed optimism. According to CNN, some of the largest fires have burned for months now. The hardest hit area, New South Wales (NSW), still has 100 fires burning.

But the fires aren't the only risk to the animals. Those that lived through the blazes also have to struggle with surviving the aftermath. The bushfires have consumed over an estimated 15.6 million acres of land. That leaves little behind for the survivors to live on and little to protect themselves with.

"Their homes are gone, and not easily replaced," narrated Miles O'Brien, reporter for PBS NewsHour. In the segment, he walked through a burned out area of land with fire ecologist Mike Clarke. There were already some green plants returning to the area, Clarke noted to the reporter, but the wildlife needed more than that to survive. They needed food, water, and a good shelter.

Clarke pointed out a large, hollowed out log. It likely took at least 100 years for the log to become the perfect home for animals in Australia's environment, he explained. And it will take a lot of time for nature to replace that log after it's destroyed. The tree seeds need to germinate. Then, it takes years for those trees to grow and bear their own seeds.

It's a natural process that depends on a little fire to give it a growth boost, but not fires like this. As the climate emergency lengthens the fire season and increases the frequency of wildfires, the trees might not have enough time to grow old enough to create seeds. It's a very real and legitimate concern researchers have about the effects of climate change.

"Fires have been more extensive, more intense, and more frequent," said Clarke. The climate has changed too fast for living creatures to make adjustments. "We have changed the dials, and we can't expect them to simply adapt. That's not how evolution works."

The Australian bushfires have killed at least 25 people, reported NPR, and over 2,000 homes have been damaged or burned down since the fire season started late last year. Firefighters and rescuers have worked tirelessly to save both animals and humans from the blazes. The non-stop work and horrific sights of burned carcasses can wear down on one's soul.

"I said to a friend of mine the other day, you know, how can we correct all this?" said licensed animal rescue expert, Lorna King, to O'Brien. "I was feeling despair. And I said, will we ever get it back?

"And he said, yes, but it will take a long time, because it's just ruined. Everything's gone, everything."