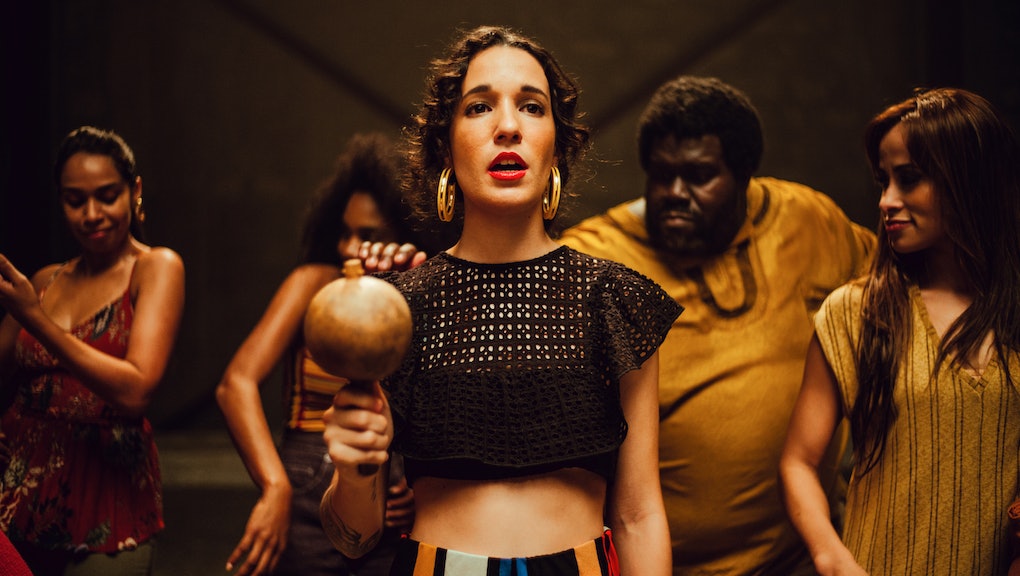 iLe is a proud Boricua and it's apparent in nearly everything she does. She recently spent weeks protesting Puerto Rico's former governor, lending her voice and her platform to the uniting cause of #RickyRenuncia. In her music, she pays tribute to the artists that paved the way for her, as well as her peers — Puerto Rican musicians and dancers — by featuring them in her work. An example of this lies in her most recent music video for her song "Tu Rumba" from her album Almadura, which was released on August 9.

The video is an homage to Bomba, an Afro-Puerto-Rican style of music and dance rooted in the history of the island's slavery — it's a genre that has transformed and influenced several others that formed after it. In a phone call with Mic, iLe explains why she felt it was important center Bomba in her video, which was directed by Alejandro Pedro.

"I wanted the video to express what we see normally in the streets when you go see Bomba. I didn't want it to exaggerate anything," iLe says, of the energy and vitality of Bomba. "I just wanted to keep it real and keep it very grounded."

"What's happening in Puerto Rico, I feel like it's something very energetic going on and Bomba, for example, is one of those [forms of] freedom that are very ancestral [that] they used to tell us the stories," iLe says. "They can be love stories or they can be a social stories or political stories."

For most of this past July, Puerto Rico became the site of groundbreaking political activism and Bomba's importance to Puerto Rico was put on magnificent display during the island's protests. In front of the Governor's mansion, thousands gathered around performers playing and dancing to the music. Millions of people took to the streets to call for the resignation of then-Governor Ricardo Rosselló, whose leaked text messages with his top officials were filled with homophobic, sexist, and racist exchanges.

The messages seemed to be the final straw for Puerto Ricans, who endured the devastation of Hurricane Maria and a lack of government support afterwards, the inefficiency and corruption of the most powerful offices in the island, and a decade of economic crisis. Puerto Rico's protests also came in the form of laso marches, rallies, dances, yoga, art, and reggáeton. iLe was there to witness it all — and in the time since the Rosselló resigned, she's still processing what she experienced. iLe says she still gets goosebumps thinking about it.

"I can't believe it because we're not used to this," iLe says of the massive protests that united the island. "And then suddenly it seems like we have done this all our lives. It's a lot to process for me. I feel so many things at the same time that I don't I don't even know how I'm feeling exactly. It's too much, but in a good way."

iLe calls what has happened on the island over the past month an awakening – and common sense. If a government is treating you wrong, "you react, you send the message that you want to send." But in Puerto Rico, that hasn't always been easy. "We've been taught to be submissive," she says, "we've been taught that we're not enough."

Those frustrations were expressed in iLe's defiant, high energy protest anthem "Afilando Los Cuchillos," featuring Bad Bunny and Residente, and gave a narrative of the protests for the people of Puerto Rico.

iLe credits much of the organizing of the protests to Puerto Rico's Colectiva Feminista, a group that has facilitated a lot of political organizing on the island, but has taken little credit. "Not everyone is noticing that or have been aware of that because they haven't looked for any recognition or anything. They just do what they feel that they have to do," iLe says. "It is a slow process, to give recognition to the women and recognize the importance of women in protest. Maybe most of the biggest changes we've had have been thanks to women."

And changes aren't finished in Puerto Rico, as far as iLe is concerned. When asked if she is happy with Wanda Vázquez Garced, who was sworn in as governor this week, she replies with a loaded: "Ha. No." As hopeful as she feels, and as much trust she has in the people of Puerto Rico, she doesn't view the swearing in of Garced as a win – but as a starting point.

"We are desperate to see change but at the same time we are not acting desperately. We are acting very consciously about that. We need to keep it together," iLe says. "We need to find ways to protest peacefully. But at the same time we need to show our anger. We have to be very firm and very clear about what we want and what we want is to clean the house. We want to start at zero."