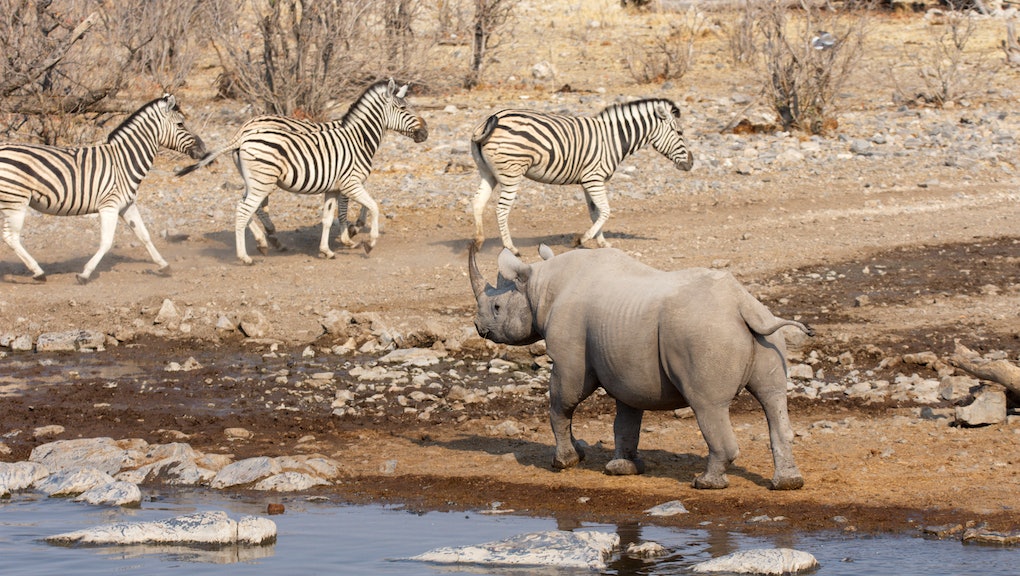 Earth is in rough shape at the moment. Wildfires continue to burn out of control in California, rare back-to-back typhoons recently hit Japan and the Korean peninsula, and an unprecedented 70-degree temperature swing took Colorado from record heat to snow in just 18 hours. To humans, it feels like the apocalypse has suddenly arrived. But if animals could talk, they might have given us a warning, as they have been dealing directly with the devastating fallout of climate change for decades now.

According to the biannual Living Planet Report published Wednesday by the World Wildlife Fund (WWF), mammals, fish, birds, reptiles, and amphibians have seen a dramatic and deeply troubling 68 percent drop off in overall population between 1970 and 2016, with rates accelerating in recent years, largely because of human activity.

WWF looked at changes in the population size of more than 4,392 species of vertebrate who call the planet home. It found that those creatures are struggling basically everywhere as humans continue to expand their reach and pump more greenhouse gases into the atmosphere. While the situation is increasingly dire globally, it has been particularly bad in Latin America and the Caribbean, where there has been a 94 percent decline in animal populations. Freshwater habitats have seen the largest decline of any environment, with animal populations shrink by 84 percent. In particular, the populations of giant catfish, river dolphins, otters, beavers, and hippopotamuses have experienced significant harm.

"Global declines in wildlife populations are a key indicator that ecosystems are in peril," Rebecca Shaw, chief scientist at WWF, tells Mic. "We depend on healthy functioning ecosystems every day without even knowing it." Maintaining the health of ecosystems ensures important resources that humans often rely on are available. Actively intervening in these ecosystems or allowing them to suffer can lead to devastating effects. A recent study suggested that shrinking ecosystems for common fish like cod, pollock, and salmon could result in losing a significant portion of the available food supply for humans. Similarly, damaged ecosystems result in the loss of natural layers of protection that are typically afforded us. When humans destroy parts of an ecosystem, many species die or move out, but disease carriers often adapt and survive, leading to increased exposure to deadly viruses.

"When ecosystems are functioning well, they deliver a whole range of benefits like clean water, clean air, a stable climate, flood protection, and pollination of our most nutritious food crops," Shaw notes. "When populations decline, the ecosystem begins to unravel and so does its ability to deliver these services." She says that biodiversity conservation should be "a non-negotiable and strategic investment" that can help humans preserve their own health and security. Failing to do so could have dire consequences for humans and the planet. "If current biodiversity loss continues, we are at risk of unleashing future pandemics and diminishing the lifegiving resources that nature provides, like nutritious foods, clean air, clean water, and medicines," she warns.

The leading causes of the dramatic changes in population highlighted by WWF come directly from humans. In particular, the expansion of humanity itself, the growth of overall consumption, and the urbanization of previously undeveloped land have disrupted the ecosystems of many animals and caused their population to suffer. According to the report, land-use change, namely the expansion of agriculture and farming that has resulted in massive deforestation, has caused the biggest losses in biodiversity. That factor certainly isn't the only one, though. Climate change, another human-caused occurrence, has also adversely affected many animals. Greenhouse gases in the atmosphere have changed the typical conditions of the land that they once called home, resulting in lower birth rates and smaller populations as the animals seek to occupy smaller and smaller swaths of survivable regions. Without dramatic efforts to change our habits and behaviors, we could see huge populations of animals entirely wiped off the planet. A recent study found that the rate of mammal extinctions is accelerating, and we could see extinctions occur at a rate that is 1,700 times faster than the last extinction event.

Luckily, the WWF report does not paint a picture devoid of hope. The researchers worked to show how these trends could be undone, and published those findings on Thursday in the journal Nature. The paper highlights an approach that the researchers refer to as "bending the curve," which shows how adopting certain policies and behaviors designed to protect biodiversity could, over time, not only slow the rate of population decline but actually reverse it and restore some ecosystems to their former strength. It will be no small undertaking, though. "Stabilizing and reversing the loss of nature caused by humans’ destruction of natural habitats will only be possible if bolder, more ambitious conservation efforts are embraced and transformational changes are made to the way we produce and consume food," Shaw says. She pointed to food production and trade as two areas that need to be improved, becoming more efficient and producing significantly less waste while also embracing more environmentally-friendly approaches. That also means humans have to participate by creating that demand, choosing diets that are better for the planet, and likely relying on less meat.

Luckily, much of the work that needs to be done in order to improve biodiversity fits well with ongoing efforts to curb climate change. "We must do everything that we can to cut greenhouse gas emissions as quickly and deeply as possible is one of the most important tools we have to help avoid biodiversity loss," Shaw says, noting that climate change is one of the biggest threats to biodiversity in the long run, particularly for terrestrial and marine systems. However, she notes that as the planet continues to warm, even as efforts are made to keep the global temperature rise below the 1.5 degree Celsius mark, there will be trade-offs made, including nature loss. But many of our goals for addressing climate change can work in tandem with the goal of protecting biodiversity. "Some choices will have strong synergies with nature, such as ending deforestation as soon as possible and restoring degraded ecosystems," she says.

Biodiversity is typically not at the forefront of conversations about climate change, but it deserves to be part of the focus. The loss of animal life and dwindling population sizes has largely gone unnoticed, at least to the extent that it has occurred already. Allowing it to continue, and continuing the behaviors that have caused it, spells doom not just for the animals that are affected, but for humans who rely on healthy and functioning ecosystems as well.

More like this
Heat waves are killing baby birds by forcing them to flee their nests before they can fly
By AJ Dellinger
Plastic Free July is the perfect opportunity to kick our pandemic habits
By AJ Dellinger
Amid daily reports of catastrophe, Americans are finally starting to realize climate change is bad
By AJ Dellinger
Stay up to date