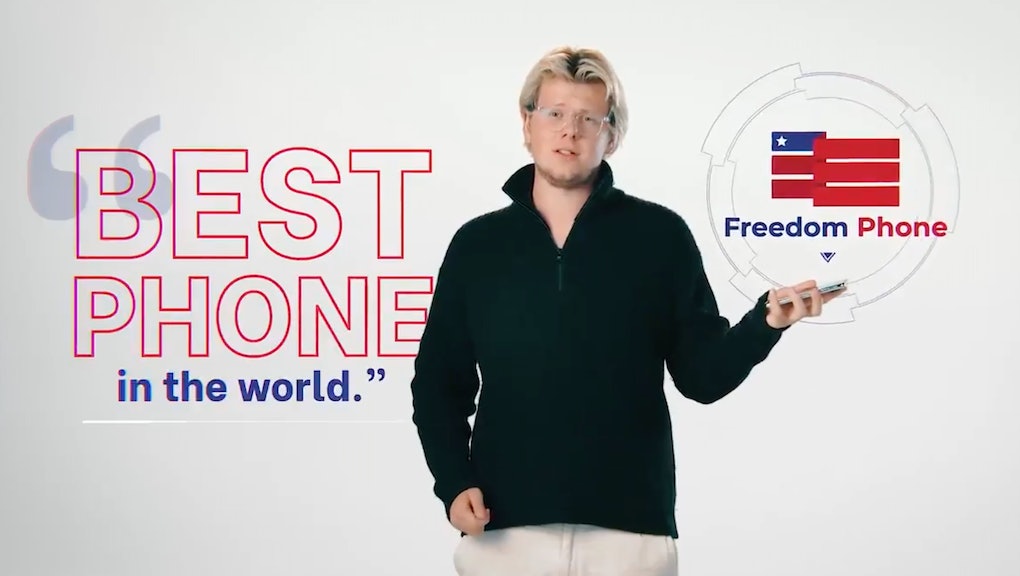 Apple and Google essentially have a duopoly over the smartphone market and use their dominance to their own benefit, stifling competition and milking money out of creators for the privilege of operating within their restrictive platforms. This is a very real and legitimate issue that hurts all kinds of people, from activists worried about government surveillance to app-makers who have their ideas copied and stolen. It is a problem that deserves legitimate regulatory scrutiny, intervention, and real competition.

Instead, we got the Freedom Phone — an unserious solution brought to you by grifters who pretend to care about the problems with Big Tech, but really only care about making a buck off their gullible audience. The creation of supposed Bitcoin billionaire Erik Finman, Freedom Phone is marketed as an "uncensorable" smartphone, serving as a home for apps that have been banned from the Apple App Store and Google Play Store. In a video announcing the phone, Finman calls the device "the best phone in the world," capable of doing "everything your current phone does, except censor you and spy on you." He also promises that the phone won't track your activity or data.

How exactly does Finman accomplish this? Well, according to the Freedom Phone's website, he's developed an operating system called FreedomOS, which is billed as "the first mass-marketable mobile phone operating system based on free speech." Finman also claims that the phone's app store, dubbed the PatriApp Store, will never censor or ban apps. In fact, it comes pre-loaded with the apps that have been scrutinized by Big Tech: Parler, far-right news outlets NewsMax and One America News, YouTube knock-off Rumble, and ... Fortnite? Apparently beefing with Apple is enough to get you a slot on the Freedom Phone home screen.

Truthfully, this is some great marketing for conservatives who feel like they are being unjustly targeted and censored by Big Tech (though are weirdly silent when environmentalists or Pro-Palestinian activists get banned or suspended). But if you've ever shopped for a smartphone before, there's a lot of information missing. For example: What are the technical specs for the phone? The Freedom Phone website doesn't say, other than to note it has "Large Storage. 6-inch Screen. Great Camera." And if you're privacy-minded, you might be curious about the source code of this brand-new operating system or want to know where the phone is manufactured — details that are also absent from any of the Freedom Phone's slick marketing.

While Finman has not been forthright with this information, you can certainly find it on your own. All you have to do is go to his original announcement post on Twitter and scroll down to the replies that he has chosen to hide. There you'll find out plenty of information about the Freedom Phone — because it's actually not a new device.

While Finman is pushing the Freedom Phone for $499, you can find it for much cheaper without the conservative catnip branding attached to it. It's a re-skinned Umidigi A9 Pro — a cheap smartphone produced by a Chinese company that can be purchased for $119. Matthew Hickey, co-founder of the cybersecurity firm Hacker House, told the Daily Dot that the Freedom Phone appeared to be a "drop-shipped" device that can be "bought and shipped in bulk from Asia with custom logos and branding so as to give the appearance of a phone that has been designed for a unique purpose."

Finman confirmed to The Daily Beast that the Freedom Phone is manufactured by Umidigi, a company headquartered in China. The phone uses a processor from Taiwanese company MediaTek, which has been roundly criticized for its lax security protocols, which have resulted in dangerous exploits. In 2019, Reuters reported that MediaTek chips were used in smartphones manufactured by the North Korean government because they were easy to manipulate in order to create surveillance backdoors.

As for FreedomOS, Finman told The Daily Beast that it is based off Google's Android operating system. What that appears to mean is that it is actually just Android with a custom skin. FreedomOS is an actual thing — a modified version of Android that has been defunct for three years now. It's not clear if Finman simply tapped this existing Android spin-off, or if he's created his own version of it, but it doesn't really matter either way: The Freedom Phone runs Android. The apps that it comes pre-loaded with are Android apps. So much for breaking free of Big Tech.

Of course, none of that has stopped the congregation of conservative grifters who have happily endorsed the Freedom Phone, even though they aren't actually using the device. Anna Khait, former Survivor contestant and current tool of right-wing propaganda machine Project Veritas, told her audience on YouTube that the phone was not an Android device and that it was manufactured entirely in America, both claims that are untrue. Candace Owens told her Twitter followers to be part of the "solution against Google and Apple" — via a message sent from an iPhone. Jack Posobiec called the device "epic." Both conservative commentators told their followers to use a discount code to get 10% off their purchase of the Freedom Phone, which appears to be a part of an affiliate program that kicks back up to $50 for each sale.

The Freedom Phone is, to use a technical term, a load of shit. It's a grift. It's a cheap and unsecure smartphone with a bunch of buzzwords applied to it, which apparently makes it worth a 400% markup. The guy who made it is hiding important details, the people promoting it don't even use it, and it solves exactly zero of the problems that it claims to. The Freedom Phone isn't about freeing people from the very real duopoly that dominates the smartphone market — it's about freeing people of their money, while charlatans pad their own pocketbooks.