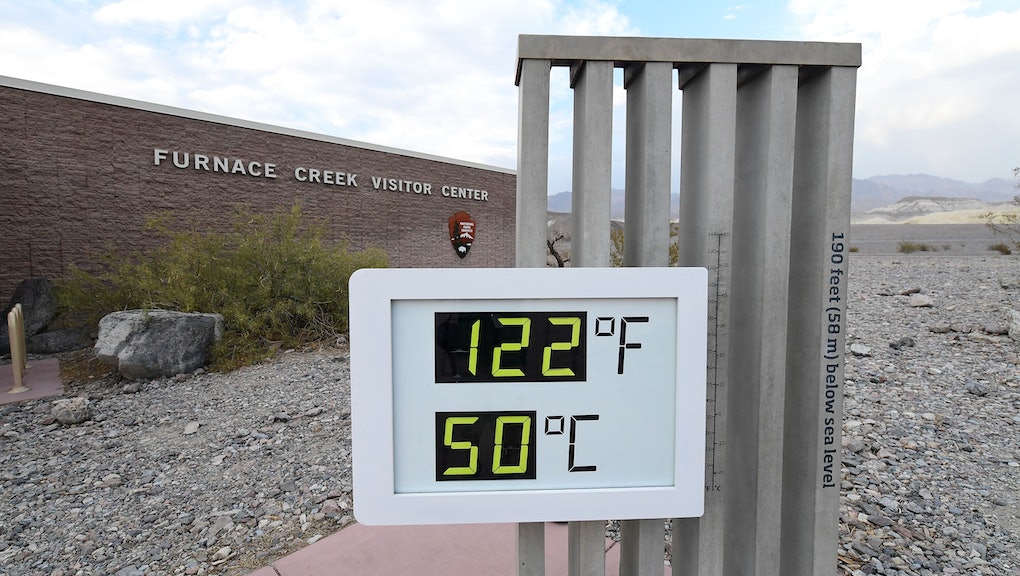 News flash: It is hot, and unprecedentedly so. Previous record high temperatures are getting broken nearly every single day across the country — particularly out West, where an ongoing heat wave is taking its toll. This is especially true in Death Valley, the hottest place on Earth, where it is somehow hotter than ever.

On Friday, June 9th, the region of the Mojave Desert that is already known for its blistering heat and bone-dry weather set a new standard for the hottest day on record. It reached a high of 130 degrees Fahrenheit, with an average daily temperature of 117 degrees — among the hottest days ever recorded. That record didn't stand for too long, though. On Sunday, Death Valley experienced an even hotter average temperature of 118 degrees, which is believed to be the hottest day that has ever been measured. It also produced the hottest daily low temperature in history, as the thermometer never dropped below 107.7 degrees in Death Valley on Sunday.

These records have a "blink and you'll miss it" kind of feel to them, both because there are simply too many records being set to keep track of, and because they just aren't holding for very long. In fact, the National Weather Service has warned that some of these record highs might be matched or surpassed again in a matter of days. It's not as if the previous highs are outliers, either. When thermometers in Death Valley skyrocketed to 130 degrees, it put them right in line with the area's previous record-breaking temperature, which had been set just one year earlier.

All of that is to say that it is very, very hot, and it seems like it's t just getting hotter. Even places that aren't supposed to be sweating right now, like Siberia, are seeing temperatures that blow past averages and approach concerning levels. According to the National Oceanic and Atmospheric Administration, June 2021 was the hottest June the United States has ever experienced, and the warmest since June 2016. As 2021 heats up, it's worth remembering that 2020 was the second-hottest year on record, the 2010s were the hottest decade on record, and every year seems to be getting hotter than the last — all while levels of carbon emissions in the atmosphere reach new highs.

High temperatures get headlines — no exception here! — but it's those record-setting lows that are worth paying attention to. Typically, low temperatures occur at night and help both to even out the averages even on hot days and to help humans recover overnight from exposure to hot weather. That's not happening now. According to the Environmental Protection Agency, new highs for the daily low temperature are being set about 60% more often than new record-level high temperatures. This makes heat waves like the one that has been plaguing the Pacific Northwest all the more deadly, as there is no reprieve from the heat even when the sun goes down; more than 200 people have already died from conditions related to heat exposure, according to The Guardian.

As this weather continues to plague the region and the rest of the world, particularly places where sustained heat is uncommon and populations are unprepared for it, we should expect more fatalities. What is happening in Death Valley is not an anomaly, and it's not just a number. When it gets this hot, there are real consequences for the people, plants, and animals that are forced to endure it. And unfortunately, if the trend lines suggest anything, it's that it's going to still get worse.