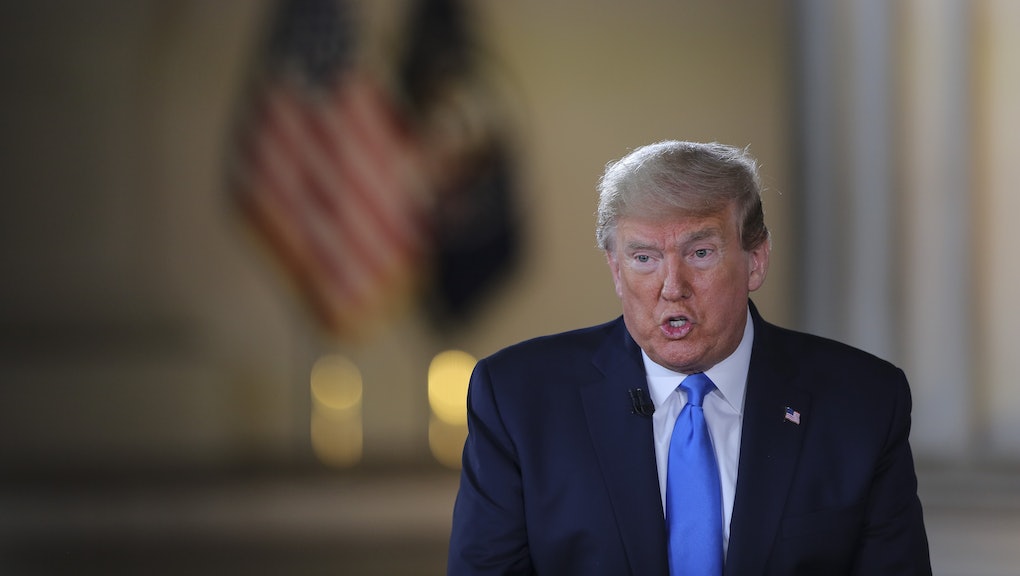 On Sunday, Trump participated in a virtual Fox News town hall — although Politico reported that what was supposed to be about the coronavirus pandemic turned into an appeal for re-election. Still, Trump did find time to talk about his new prediction during the event, which was held at the Lincoln Memorial in Washington, D.C.

"We're going to lose anywhere from 75, 80 — to 100,000 people. That's a horrible thing. We shouldn't lose one person over this. This should've been stopped in China," Trump told Fox News hosts Bret Baier and Martha MacCallum, echoing a theme from his administration to shift blame to China.

The U.S. reported coronavirus death toll is more than 69,000. Trump's original 60,000 prediction was surpassed last week, and the U.S. just recently had its deadliest day for coronavirus patients. Per the World Health Organization's data, collected as of 4 a.m. ET Friday, 2,909 people died of the coronavirus in 24 hours while states like Georgia, South Carolina, and Texas allowed nonessential businesses to reopen.

The problem is that there's no reason for Trump's number to be continuously changing like this. At the end of March, the White House predicted between 100,000 to 240,000 people could die from coronavirus even with protections like lockdowns in place — an estimate Trump said would indicate his administration had done a "very good job." The federal government even placed orders for 100,000 new body bags just last month.

While Trump may say we shouldn't lose even one person over the coronavirus, his actions contradict that message. On April 17, Trump took to Twitter to tell his supporters to "liberate" Minnesota, Michigan, and Virginia in support of a number of right-wing protesters, who held anti-stay-at home rallies. All three states are led by Democratic governors.