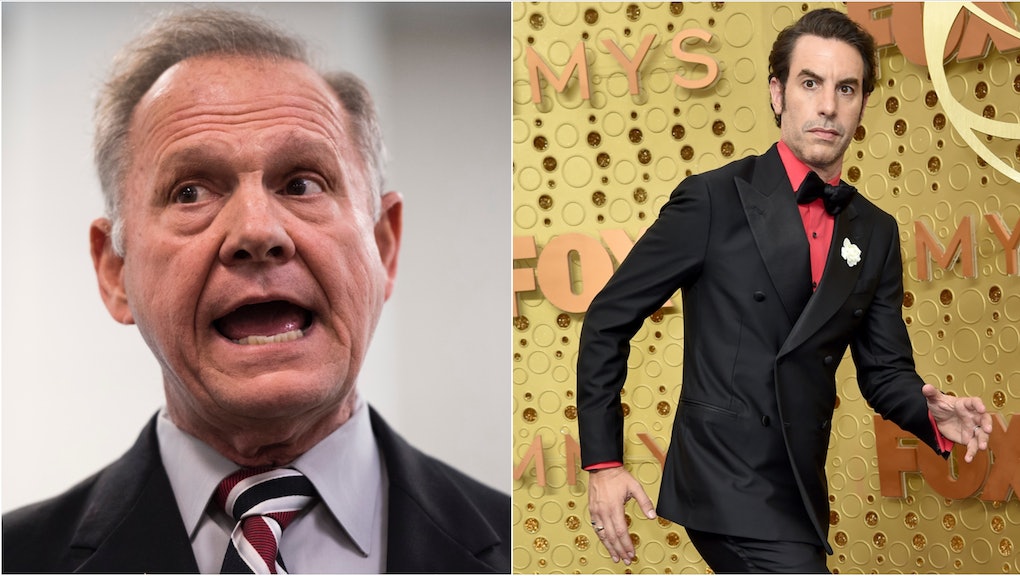 If it's been a while since you watched the five-minute Who Is America? sketch where Sacha Baron Cohen waves a "pedophile detector" at Roy Moore, now is the time to revisit it. Always the chameleon, Cohen duped the former Senate candidate into an interview by posing as a fictional Israeli anti-terrorism expert. Pretending to show off innovative technology, a wand he said could identify "sex offenders and particularly pedophiles," the comedian waved it over Moore, and it started beeping.

"I've never had an accusation of such things," the flustered politician protested. "Certainly, I'm not a pedophile," he said before storming out of the 2018 interview. But actually, Who Is America? aired after Moore was accused of sexual misconduct by numerous women, one of whom claimed he initiated a sexual encounter with her when she was 14.

Moore, who lost the 2017 special election in Alabama, shouldn't have been surprised. Cohen lured everyone from Dick Cheney to O.J. Simpson into humiliating and incriminating on-camera interviews for Who Is America? It's his bread-and-butter, and he's still doing it. Just last summer, the Borat sequel caught Rudy Giuliani with his hands down his pants.

But, alas, Moore isn't the type of guy who can take a joke at his own expense, so he filed a $95 million lawsuit against Cohen, Showtime and CBS for defamation and "extreme emotional distress." Somehow, the case wound its way through the judicial system for years. Just last summer, a judge denied a motion to dismiss it. But on Tuesday, a federal judge finally tossed the lawsuit, siding with Cohen and ruling the sketch was "clearly a joke."

As an aside, the first few minutes of Moore's interview are way more insidious. It's chilling to watch him claim that Alabama is a state built on values like freedom and equality. "In Alabama, people have always been free, whatever their religion or race or sexuality?" Cohen, in character as the Israeli defense expert, asks. "Well, it's part of our heritage," Moore asserts, glossing over slavery, Jim Crow and the violence perpetrated during the Civil Rights movement — no big deal.

But back to Moore being called a pedophile: U.S. District Judge John P. Cronan decided that "no reasonable viewer" would believe in Cohen's bogus technology — unlike the butt of the joke, who seemingly goes along with the demonstration until he's the one getting called a sex offender. "It is simply inconceivable that the Program’s audience would have found a segment with Judge Moore activating a supposed pedophile-detecting wand to be grounded in any factual basis," Cronan wrote in his opinion. In other words, being silly may have saved Cohen a cool $95 million.

Obviously, Moore is not happy about the judge's decision. His lawyer, Larry Klayman, called Cronan "biased and prejudiced" against his client's conservative politics and beliefs: "He even characterizes what the admitted fraudster Sacha Baron Cohen did, branding my client a pedophile before the entire world, as simply a 'joke.' To the contrary, Judge Cronan’s dismissal is the joke, and more than a bad joke at that." Uhhh, zing?

This isn't the first legal challenge Cohen has faced, which is hardly surprising. He's been unsuccessfully sued by people he fooled while making both Borat movies and Bruno, including the daughter of a Holocaust survivor who claimed the comedian tricked her mother into an interview. The lesson to be learned? If someone who looks kind of like Cohen but way more ridiculous engages you in hijinks and then asks you to sign a waiver, don't do it. Unless you're a power-hungry politician accused of preying on women, in which case, you probably deserve to get duped.