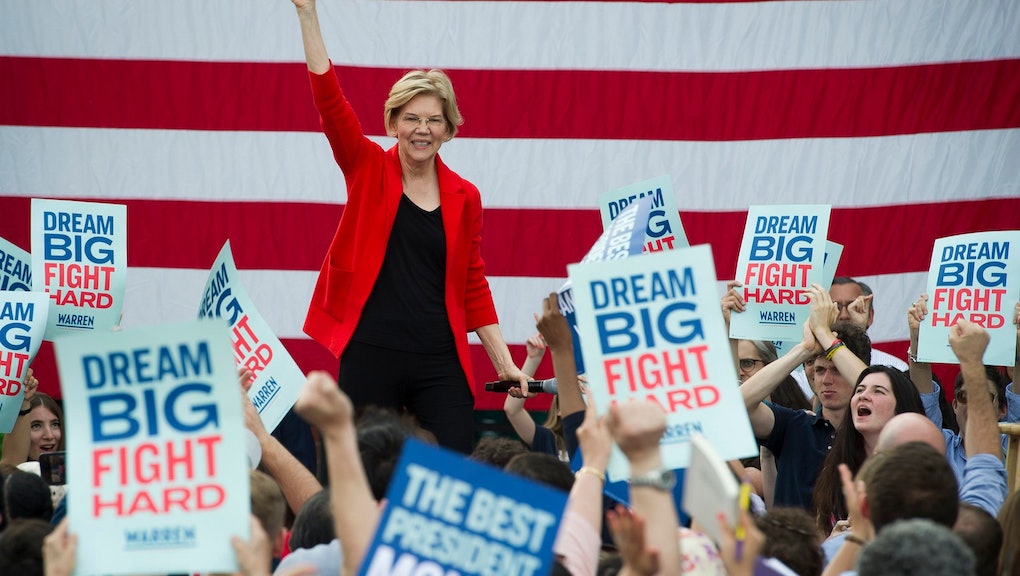 During an appearance on the daytime talk show The View on May 30, host Meghan McCain asked Elizabeth Warren about how the media covers her, as a woman and one of the 20-plus Democrats running for president. Warren's response to the question didn't mention the various articles that endlessly belabor her electability, likability, and similarities to former Democratic presidential hopeful and other blonde woman Hillary Clinton. Rather, Warren continued to focus on policy and cited her own history as a politician to frame her 2020 run in a crowded field of candidates — and her answer shed light on what we miss out on when media outlets focus on the question of "electability."

"In 2012 I ran against an incumbent Republican who was very popular, and who had beaten a very very capable woman just about three years earlier," Warren explained to hosts McCain, Whoopi Goldberg, Joy Behar, Sunny Hostin, and Abby Huntsman. In 2012, Warren defeated incumbent Republican Senator Scott Brown, in an expensive and heated race for the Senate seat.

"A lot of folks said 'Elizabeth, you shouldn't run, you're going to lose, because Massachusetts is not going to a elect a woman for a seat like that. Not for governor, not for senator.' My answer? I just stayed in there and kept fighting for what I believe in. And inch by inch, person by person – I started down by 17 points. I ended up beating that guy by 7 and a half. "

Warren's response is relatively standard for her presidential campaign – and it's not the first time she's had to answer a question similar to McCain's. During a town hall in April, a woman in the audience asked Warren if she learned any lessons from the sexism in 2016 election. Warren gave a nearly identical answer to the one she gave on The View, discussing her senate race in 2012.

"I kept getting out there talking about what’s happening with working families across the country," she told the audience member. "Talking about how Washington works great for the rich and the powerful, just not working for anyone else, and how we’ve got to fight back against that."

She has become known for responding to reactionary moments with grounded information and forward-thinking policies. When asked about the press coverage she's received, Warren didn't focus on the media's reaction to her campaign. She responded to McCain's question by giving examples of how she responded to similar treatment in the past, and pivoted back to the issues that she is focused on.

She was on the show to promote her most recent policy rollout, universal childcare. It's one of a dozen proposals Warren's made since she announced her candidacy – others include student loan forgiveness, improving maternal health care, and fighting climate change. Her campaign has pushed her "I have a plan for that," approach for the past several weeks, and the strategy appears to be working.

The New York Times reported on May 28 that Warren is polling third behind former Vice President Joe Biden and Vermont Senator Bernie Sanders, though considering how far away we are from the primaries, these numbers aren't the most reliable.

Her high polling numbers are that way perhaps in spite of the op-eds and analytical media coverage about Warren's electability that plagued the first months of her presidential run. Nationally recognized publications have been guilty of running pieces that compare Warren to Hillary Clinton, and have spent a disproportionate amount of time questioning whether Warren specifically can stand a chance against defeating Donald Trump. And writers, pollsters, and pundits questioned whether Warren's focus on policy would alienate her from voters.

This coverage happened concurrently with stories of the multiple allegations of inappropriate touching and sexual harassment made against Biden. This hasn't seemed to affect Biden's polling numbers, and the allegations didn't seem to draw the same questions about electability that Warren's campaign has.

It does beg the question: are the factors by which we're determining electability even relevant? Polling data – as often as it is correct – has been catastrophically wrong in crucial moments. Fundraising – as necessary as it is – has become more scrutinized as more politicians reject corporate funds. And likability seems to be a factor that is only applied to political candidates who aren't men – making it not just an unfair metric, but an inaccurate one.

As Moira Donegan wrote for the Guardian in January, "the question of “likability” as it is applied to women candidates has become a kind of cipher through which pundits, strategists and ordinary Americans discuss our collective discomfort with women in power."

Which is not to say that this coverage that McCain refers to, and that Warren deftly spoke around isn't impactful. By constantly pondering in the public forum if Elizabeth Warren is electable in a way that no other candidate is scrutinized, her entire campaign is thrown to the sidelines of that question. Other women running for president have been criticized for other things, but none have had "electability" thrown at them to the same extent as Warren.

Treating men, and especially white men as inherently electable has allowed candidates like Beto O'Rourke and Pete Buttigieg to approach their actual platforms and beliefs with less urgency. O'Rourke spoke about his first concrete policy proposal – concerning immigration reform – in the last week of May, even though he's been formally running for president since March 14. Buttigieg often uses vague rhetoric when talking about issues like abortion, taxes, and climate change, and while he believes a lot things, he didn't propose any specific solutions until after he was challenged in a town hall about his lack of policy proposals.

A lack critical analysis of Warren and her policies is not only unfair to her, but also to voters. There are plenty of things she should regularly be challenged on: her stance on sex work, her linkage of fighting climate change to national security, that time she did a DNA test in response to Trump's taunts about her Native American heritage.

Clearly, we're not going to reach a point where gender – or any other identity – is no longer a factor for candidates. Too few people who aren't white men have been elected to public office for that to be the case. But if press coverage of women who run remains reductive, media (and likely, also the country) runs the risk of permanently asking the question: "Is this woman electable?" instead of "Should we elect this woman?"

More like this
More than 200 GOP lawmakers asked the Supreme Court to overturn Roe v. Wade
By Rafi Schwartz
Should public transit be free?
By Andy Crump
Mexico is suing U.S. gun manufacturers over firearms flowing across the border
By Rafi Schwartz
Stay up to date