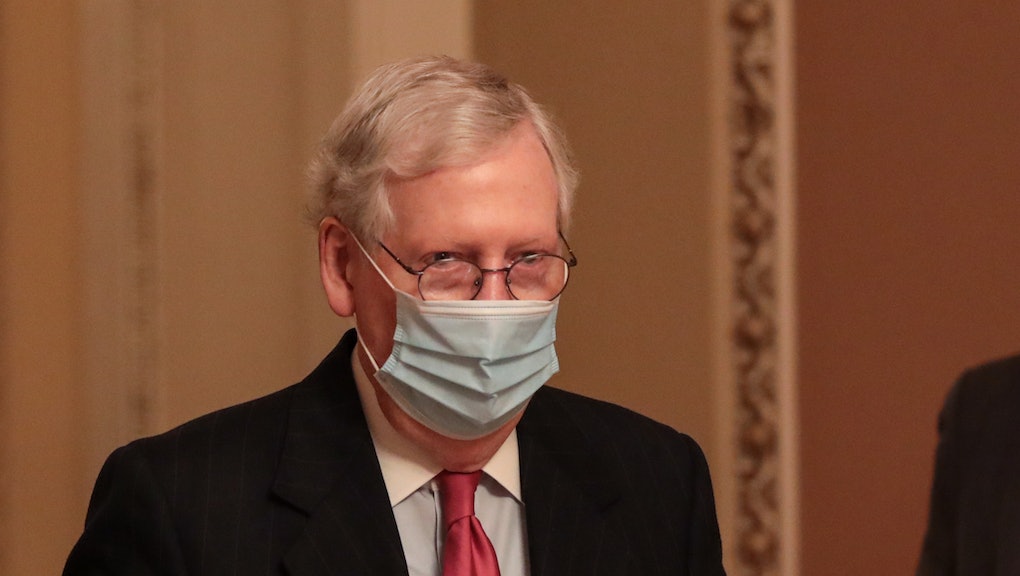 Everyone agrees on $2,000 stimulus checks — except Mitch McConnell

If you've been able to read the news lately you might have seen that President Trump finally signed a second coronavirus relief package Sunday. It calls for a continuation of the demands in March's CARES Act: rent relief, extension of unemployment insurance, and funds for small businesses among others. You also might have noticed that while the Treasury Department is set to start cutting individual checks for $600 — a line-item Congress agreed on two weeks ago — there's another political battle brewing over how much money those checks should actually include.

At first the argument over direct payments was a moral one — the moral need to provide any amount to the American public given the devastating financial hardship caused by the coronavirus pandemic. (Really though, no amount could undo the harms of this year.) Then it was about getting Republicans on board with an idea that veered too far into so-called "socialist" territory. Then President Trump moved the goal posts by calling for $2,000 individual payments at the last minute, wanting to seem like a hero. Then the House of Representatives approved the idea, led by the Democratic majority. Then Senate Majority Leader Mitch McConnell (R-Ky.) blocked a vote to move ahead with those larger direct payments, even though it was the president's idea.

Now you're caught up to speed. Well, almost.

It's not just that McConnell is blocking a vote on the call for increased payments of $2,000 to every American who earned less than $75,000 in 2019. And it's not just that some Republicans aligned with Trump to support direct cash payments, after spending months saying that driving up the pricetag of the relief bill was unconscionable. It's the politics happening around the negotiations that tells us what's really at stake.

Next week, Georgia voters will decide who will represent them in the Senate, and the two GOP candidates got on board with expanded stimulus checks as a way to demonstrate support for Trump. But as long as the Senate is in session — as of now the plan is to vote on an anticipated veto override this week, on a separate defense bill that Trump vetoed — incumbent candidates David Perdue and Kelly Loeffler can't return to the Peach State to campaign.

As Politico reported, it's in McConnell's best interest to get the legislating over with so that two members of his caucus can cement their seats in the Senate and retain McConnell's slim majority. McConnell's refusal to vote on $2,000 checks — which barely covers rent for a month for most families, mind you — isn't about Trump, and it potentially hurts Perdue and Loeffler. So what's going on?

Though we might never understand McConnell's thinking or get a real answer to this question, Sen. Bernie Sanders (I-Vt.) is going to force some sort of response. Late Monday evening, Politico reported that the senator would filibuster the veto override vote (it's allowed, though rare) until McConnell brings the topic of $2,000 checks to the floor. It's a bold move, preventing senators from returning home until McConnell ends his machinations — and we'll have to wait until Wednesday to see if it works.