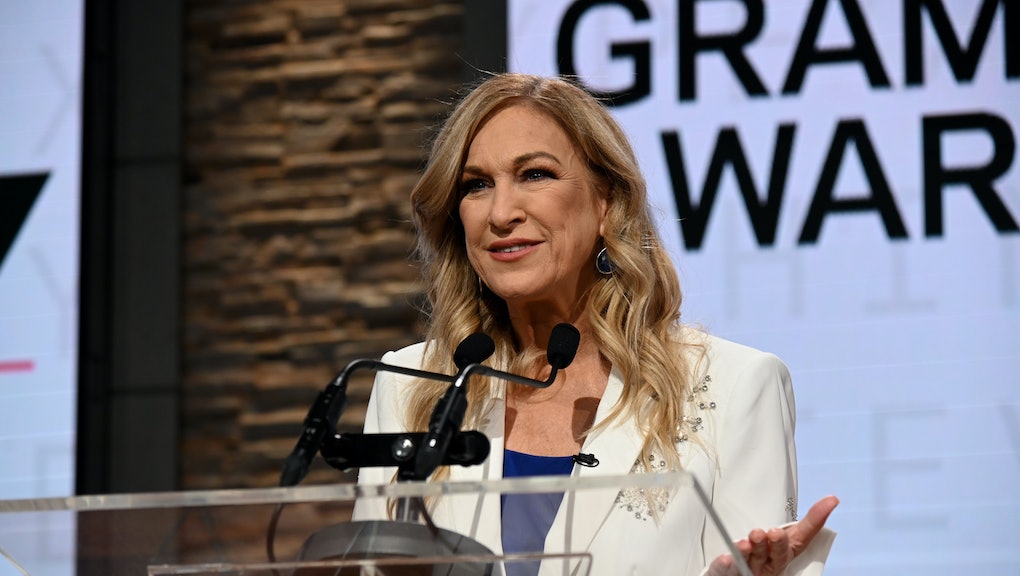 Last week — 10 days before the 2020 Grammys — the Recording Academy suspended its president and chief executive, Deborah Dugan. The organization sent a memo to academy members accusing the CEO of misconduct. A “senior female member” of the organization alleged Dugan was “abusive and bullying” and fostered a “toxic and intolerable” workplace.

Today — five days before the Grammys — Dugan countered her ouster with a 44-page legal complaint accusing the academy of voting corruption, sexual harassment within the organization, and a rape cover-up.

Dugan barely held her job for six months. Her predecessor, Neil Portnow, headed the Grammys from 2002 to 2019. When the 2018 Grammys were widely panned for awarding just one female artist, Alessia Cara, in any of the major categories, Portnow incensed critics by saying women needed to “step up” if they wanted to succeed in the music business.

Portnow handed the keys to Dugan in August 2019. Then, according to the new CEO’s filing, after she was hired, Dugan “was hauled into a conference room and told — for the very first time — that a foreign recording artist (and member of the academy) had accused Mr. Portnow of raping her following a performance that she gave at Carnegie Hall. The news was presented to Ms Dugan as though the board had just learned of the allegation. In reality, they were well aware of the allegation at the time Ms. Dugan agreed to take on the CEO position, but never told her.” Dugan said she was told the assault allegation was “the real reason [Portnow’s] contract was not renewed” in 2019. Dugan said the Grammys chairman John Poppo then pressured her to rehire Portnow as a “consultant” with a $750,000 salary — despite the rape and coverup allegations.

Portnow responded to the rape allegations against him on Wednesday: “This document is filled with inaccurate, false and outrageous and terribly hurtful claims against me,” he said.

The Recording Academy also released a statement discounting Dugan’s allegations: “It is curious that Ms. Dugan never raised these grave allegations until a week after legal claims were made against her personally by a female employee.”

The Grammys also alleged Dugan demanded $22 million to step down, which she denies as “flat out false.” On the contrary, Dugan’s lawyer Douglas Wigdor said she was offered “millions of dollars to drop all of this and leave the academy.” When Dugan refused, she was suspended.

The machinations at play here — that presumptively Dugan was sidelined as punishment for causing ruckus within the Grammys rank and file — it all sounds like a plotline from Succession. It also sounds all too familiar in the #MeToo era. Dugan’s legal filing alleges the misconduct within the academy was enabled by a “boys’ club mentality” within the organization. Her lawyers said the Grammys used “tactics reminiscent of those deployed by individuals defending Harvey Weinstein.”

In a statement, the Academy’s former Director of Administration, Claudine Little denied the allegations.

“Ms. Dugan’s choice to litigate in the press and spread a false narrative about the Academy and me and my colleagues is regrettable, but it is also emblematic of Ms. Dugan’s abusive and bullying conduct while she served as the Academy’s President and CEO," the statement reads. "I am proud of my career with the Academy—where, as a woman, I was able to work my way from secretary to Director of Administration in the executive suite, solely based on merit and while working for and with leaders far more demanding and hard-charging than Ms. Dugan."

The statement goes on, describing Dugan's allegations as manipulative. "It is disappointing that Ms. Dugan hopes to leverage public opinion along gender lines and expects not to be scrutinized for her inexcusable behavior simply because she is a woman; she should be held to the same standard,” the statement concludes.

Again, this is all unfolding less than a week before the 2020 Grammy Awards on Sunday night. Which are bound to be a tense broadcast.

Dugan’s filing against the Grammys also accuses the institution of voting corruption. It alleges that one song long-listed for 2019 song of the year had been ranked 18th out of 20 by the Grammys nomination committee. But the artist behind the song sat on the committee and was represented by someone on the Grammys board. So the song was slotted in at the top of the list.

Dugan also alleged the nomination committee added artists that weren’t selected by the Grammys voting pool. She said the board “has decided to shroud the process in secrecy, and ultimately controls, in large part, who is nominated.”

Dugan added that nominations are mostly based on who’ll make for good TV. “[The Academy] “manipulates the nominations process to ensure that certain songs or albums are nominated when the producer of the Grammys [Ken Ehrlich] wants a particular song performed on the show,” she alleged.

On Thursday, Dugan was joined by her attorney Douglas Wigdor on Good Morning America as well as CBS This Morning. In both interviews, Dugan doubles down on her claims, and her attorney called the Academy's response a sign of panic. “The Grammys really is on life support right now," Weber said. “The statements they’re giving about Ms. Dugan creating a toxic work environment, getting the executive board members to make statements — they are in panic mode right now.”

How can fans, or artists for that matter, care about what these gatekeepers say anymore? The Oscars are still devastatingly white and male. A top executive is saying that the Grammys are rigged. Artists like Justin Bieber, Kanye West, Frank Ocean and Drake have all said the awards aren’t “relevant or representative." There’s a growing movement towards artist empowerment, eschewing the old studio structures and funneling profits into more independent work. It’s exciting and necessary.

In the same vein, it’s time to throw out awards as any sort of arbiter of taste or excellence. At the very least, they need to be reconfigured so they’re representative of great work being made globally.

Editor’s Note: This article was updated at 11:30 a.m. ET to include a statement from the Academy, and public interviews from Dugan and her attorney.