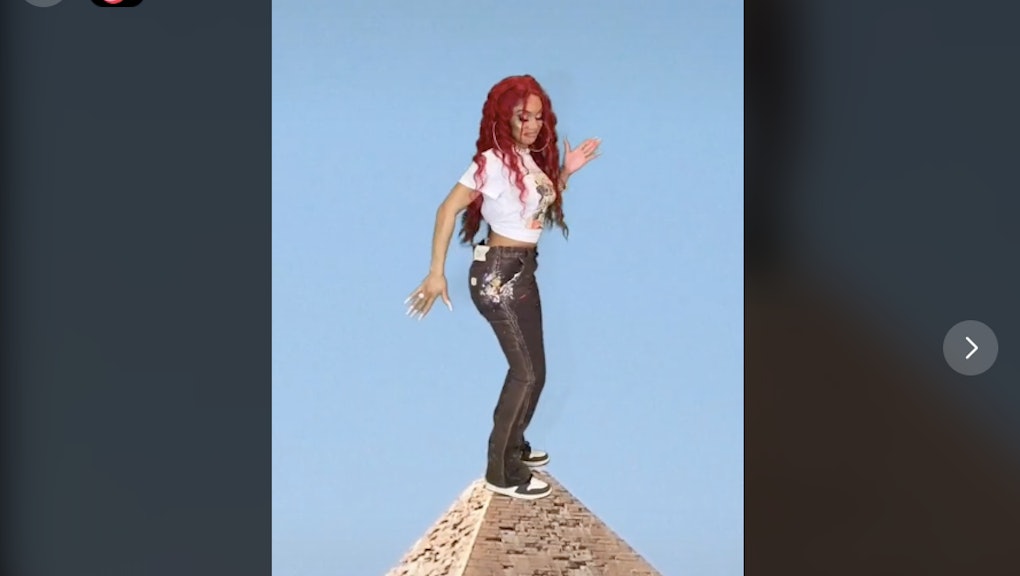 Funny 2021 TikToks that are helping us survive this endless winter

It’s hard to believe that anything could be more chaotic or surreal than last year. But already we've experienced a failed coup on the capitol, record deaths from the pandemic, and the second impeachment of Donald Trump — and we're not even out of January yet.

All this mania has left us longing for the old days when winter was just an extremely long, cold, boring couple of months. Now it feels like we are living through a historical event nearly every other day, and we’re spent. So we do what we do best when life is overwhelming, and retreat to our phones.

Despite the madness we’ve collectively been living through, we can still turn to TikTok to put a smile on our faces, no matter how weird or terrifying the news gets. Here are some of the videos bringing us joy right now.

Since Olivia Rodrigo released her hit “Driver’s License” earlier this month, it’s been impossible to escape it on TikTok. The hit-making platform is responsible for the ballad blowing up to No. 1 on the Billboard Hot 100 chart last week, with millions of users using the sound. Although countless musicians on the app have tried their hand at belting the track — I’ve seen everything from rock to country covers — it’s the less talented singers that I have enjoyed watching the most. The imperfect-pitch versions, often covered by groups of friends, are terrible in the best way. It’s impossible to look away.

Earlier this month, TikTokers went crazy for Lubalin, a Canadian musician who turned ridiculous internet drama into catchy tunes. His song about Karen, “a rotten recipe stealin Bitch” has been stuck in my head for weeks. With his millions of fans (including me) eager for more, he returned last week with a couple fresh earworms, including a track he made with Jimmy Fallon and Allison Brie about blue-cheese dressing. Even my parents, who know nothing about TikTok, can’t get enough of it.

The Buss It Challenge was the first official dance challenge of 2021. In the videos, which are put to Texas rapper Erica Banks's single of the same name, dancers first appear in no make-up and sweats before dropping it low Megan Thee Stallion-style and transforming into a full-glam look. The power these glow-up videos is something to behold — especially considering these people had to change out of their pajamas.

The niece of Kamala Harris is no stranger to going viral for her videos showing behind-the-scenes footage of the Vice President on her historic road to the White House. The lawyer and children’s book author has racked up over 2 million followers on the app, where she makes silly relatable videos about her family. In one posted early this month that’s been viewed almost 25 million times, Meena hands her aunt a jar of peach-flavored mints that she calls “Impeach-mints.” A relaxed-looking Vice President Harris, dressed in a suit and white ankle socks, bursts out in laughter over the pun mocking Trump. What’s not to love?

Bernie Sanders at the Inauguration

Like every other corner of the internet, TikTok couldn’t get enough of Bernie Sanders after the presidential inauguration. The viral image of the Vermont senator sitting cross-armed and slouching in his winter coat and knit mittens was the perfect mood for 2021 thus far: let’s just get it over with. While it’s impossible to know what he was thinking during the wildest transfer of power we’ve seen in our lifetimes, I like to think this particular TikTok was pretty spot on.

It’s hard to describe this viral dance challenge, but it's simple, yet constant movements might be the most accessible choreography on the app. In recent weeks, millions of people including LeBron James, Meek Mill, and Kevin Hart have been spotted emulating the ridiculous moves. Like its titular inventor, the California digital creator Junebug, dancers try to break it down in the strangest places they can find, which have included everything from the roof of an SUV to the photoshopped tip of a pyramid.

I haven’t watched Bridgerton on Netflix yet, but I have seen the Bridgerton musical gaining traction on TikTok. Earlier this month, songwriter Abigail Barlow proposed making the hit series into a musical, and people were hyped, with many responding with their own amazing auditions. Much like the beloved Ratatouille musical that was born on the app, this looks like it could become a thing.

Since most of us have not been able to travel in months, the much-needed escape landlubbers have been looking for has come in the form of #ShantyTok and its revival of bygone sailor songs. At the center of this trend is Nathan Evans, whose cover of the century-old tune “The Scotsman” helped bring the beauty of sea shanties to light last December. Since then, the trend has only grown. His original video has been viewed over 3 million times and Evans recently quit his job as a mailman and signed a record deal — it’s nice to know 2021 has been good to someone. Others have been flooding the app with their take on the traditional work songs making it the unexpected Year of the Sea Shanty.