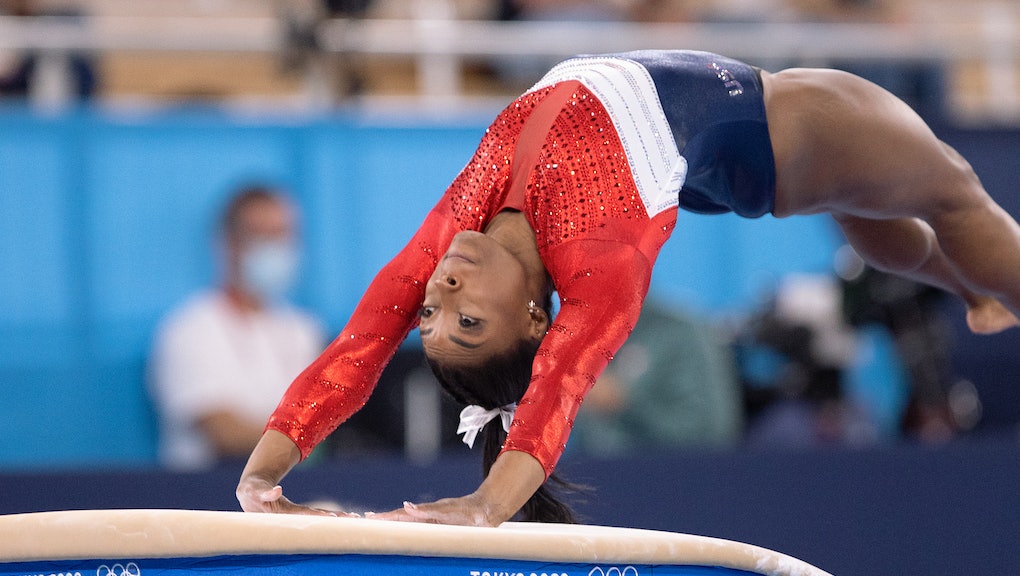 Lots of people learned a new phrase this week: the "twisties," which is what gymnasts call the mental and physical anomaly Simone Biles experienced during her vault at the women's team final at the Tokyo Olympics. The star of Team USA meant to do 2.5 turns in midair but only did 1.5 and landed with a big correction. To the untrained eye, it looked like she messed up. But Biles had suddenly lost the ability to sense where she was while hurdling through the air. As many gymnasts have pointed out, she's lucky she managed to land on her feet.

When you're flying through the air that fast, there's not much margin for error. You're mostly relying on muscle memory from years of training to make sure moves unfold like they're meant to. When Biles launched herself off the vaulting table and started spinning, her brain suddenly felt disconnected from her body. She wasn't able to use her limbs to control her tumbling and didn't know where she'd land. "I had no idea where I was in the air," she later said. "I could have hurt myself." Stills of Biles in midair from that terrifying vault show her looking discombobulated.

In the days since Biles made the decision to withdraw from competition, legions of fans have voiced their support, commending the elite athlete for prioritizing her wellbeing above everyone else's Olympic-sized expectations. A handful of jerks have taken shots at her, too, but they're being dealt with.

Gymnasts, however, immediately understood the seriousness of the situation. "One former US elite gymnast I talked to said that if it was someone other than Simone Biles who had made that same error, they would have certainly blown a knee, at minimum," tweeted Deanna Hong, a producer of Golden: The Journey of USA's Elite Gymnasts. "Another said if it had happened to her instead of Simone, 'I probably would have ended up paralyzed.'"

An athlete who'd experienced the same thing as Biles and wasn't so lucky shared their experience: "As someone who did a vault while having the twisties, resulting in temporary paralysis, a 3 week hospital stay, months of physical therapy, and a toll to my mental health, I couldn't be more proud of @Simone_Biles decision, even on the world's biggest stage."

Biles liked that viral tweet, as well as other empathetic messages from people in her corner. "I don't think people realize that [if] Simone Biles isn't feeling right mentally she can literally die doing her gymnastics," one read. "That's how hard the shit she does is. One wrong move and it's disaster."

Another voice of reason the star gymnast retweeted argued: "Did she cost the team a gold medal? Or did her decision help her team win a silver medal? Because if she had a really bad performance her team would not have placed at all."

It's an unfortunate instance of life mirroring art, but Biles' experience at the Olympics mirrors the plot of the season two premiere of Ted Lasso. [Semi-spoiler alert] A star player gets the yips — a sudden and unexpected loss of skills in elite athletes — so management brings in a sports psychologist to help fix the problem. (Ted is forced to confront his hangups about therapy, which is touching.)

What happened to Biles is far more serious, since getting the yips puts her in mortal danger. Still, the fact that athlete mental health has taken center stage both IRL and on our TV screens feels like an important shift. The twisties are nothing new. Having meaningful conversations about mental health and anxiety, however, is a welcome development.

More like this
How many times must victims relive their trauma in the Larry Nassar case?
By Chloe Stillwell
Colin Kaepernick's new Netflix documentary highlights the man behind the icon
By Keith Nelson Jr.
The moral of Nicki Minaj and the Tale of the Giant Balls? We need to explain vaccines better
By Kara Weisenstein
Stay up to date