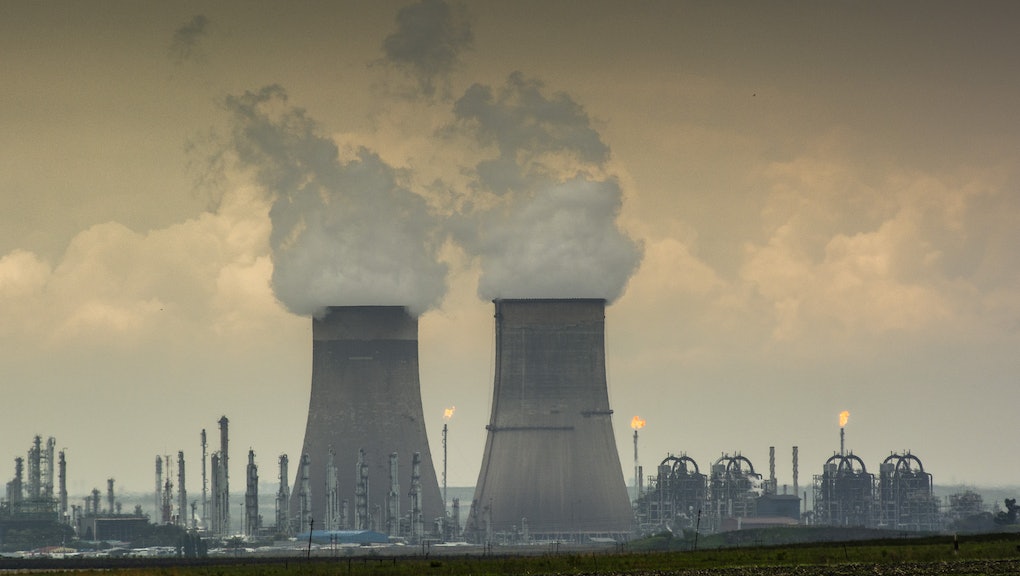 Global greenhouse gas emissions leveled off in 2019, but we still need more progress

With the amount of new and dire information about the state of the climate and the future of the planet, sometimes no news feels just as good as good news — or in this case, no change is good change. According to the International Energy Agency, human-made greenhouse gas emissions reached 33 gigatons in 2019. That's almost identical to the amount of emissions humans were responsible for in 2018.

While the actual amount of emissions didn't start to come down last year, there is at least one indicator to suggest our emissions problem might be taking a small step in the right direction: emissions leveled off despite growth in the global economy of 2.9 percent, which would usually equate to more new emissions. That is in part because while developing countries largely rely on cheap fossil fuels like coal and natural gas, advanced economies have successfully started to lower their carbon emissions. The United States, despite having a climate change denier holding the highest office in the land, managed to record the largest drop in total carbon emissions, cutting back on 4.8 gigatons between 2018 and 2019. The European Union saw the largest change by percentage, cutting out five percent of all emissions — 2.9 gigatons in total — during the same time period. Japan also saw significant change, dropping 4.3 percent.

The fact that some of the largest advanced economies of the world are managing to make progress should be taken as a positive sign, even if emissions haven't started to teeter off globally. This bright spot is driven primarily by one thing: ditching coal. According to an analysis provided by the International Energy Agency, global carbon emissions from coal use dropped by nearly 200 million tons — about a 1.3 percent decline from 2018 levels. In advanced economies, reliance on coal saw a noteworthy decline of nearly 15 percent. That includes a 15 percent drop in coal usage in the United States, where President Trump has done everything in his power to prop up the dying industry — including pushing the nonsensical concept of "clean coal," rolling back environmental protections for coal plants that limit pollution, opening up federal lands for coal mining projects and straight up ignoring the health risks associated with working in coal mines. The country has largely moved away from coal anyway — in part because it simply has become too expensive to justify using and in part because, despite the federal government's promotion of the fossil fuel, many major cities across the country have simply banned or phased out the carbon-emitting substance.

Getting major economies to move away from reliance on coal is unquestionably a step in the right direction, and the results are evident in the emissions figures — but that doesn't mean that there is nothing but blue skies ahead of us. The fact is, advanced economies — especially the United States — largely shifted coal use over to natural gas. It is cheaper and emits about half as much carbon when burned as opposed to coal, but it is still a fossil fuel and results in considerably more emissions than shifting to a renewable energy source. While coal power may be on its way out, natural gas accounted for a record high 37 percent of all electricity generation in the U.S. Continued reliance on natural gas — which the Trump administration has encouraged by loosening restrictions on drilling — is not sustainable if the goal is to reach net zero emissions. It is an improvement only in comparison to coal but it is not a legitimate source of clean energy. Even with the decrease in carbon emissions in 2019, the United States is not on track to reduce greenhouse gas emissions to 45 percent below 2010 levels by 2030 — the goal set forth by the Paris Climate Agreement, of which the US is no longer a part of.

While the U.S. and other advanced economies shifted away from coal in 2019, the International Energy Agency found that developing countries remain heavily dependent on it. Emissions outside of advanced economies were on the rise in 2019, adding 400 megatons of emissions to the atmosphere. Most of that came from Asia. While that includes a slight rise in emissions from China and moderate growth from India, both of those countries have made efforts to shift energy production to cleaner energy sources. India even saw its first decline in coal usage since 1973. But in Southeast Asia, the exact opposite occurred. As nations in that region continue to advance and develop, they have relied heavily on coal as an energy source.

This is where the footprint of the U.S. expands, even if it is not responsible for burning the coal itself. The vast majority of coal mined in the country is shipped overseas. According to the U.S. Energy Information Administration, the country exported about 115 million tons of coal in 2018. About 15 percent of it was purchased by India and about 25 percent of total exports went to developing nations across Asia. Similarly, America's abundance of natural gas has turned it into a major exporter of the fossil fuel. It is projected that the U.S. will become the largest exporter of natural gas in the entire world over the course of the next five years. Even as the U.S. starts to shrink its carbon footprint, it continues to enable the behavior that allows developing nations to make up for any drop in emissions — resulting in global emissions essentially staying the same in 2019 rather than declining.

Given the fact that it was projected global carbon emissions would increase in 2019, leveling off and remaining the same can be viewed as a small victory — though only because we were expected to so spectacularly fail. 2020 is the first year in which countries around the world that are a part of the Paris Climate Agreement will be asked to check in and set new goals. Those future benchmarks will need to be more ambitious than breaking even if we stand a chance of hitting net zero carbon emissions by 2050 — breaking even isn't going to cut it for much longer. It is a positive step to see advanced economies break their reliance on coal and moving toward cleaner alternatives, but these nations can't just set an example for others — they also cannot enable other countries to simply counteract any drop in emissions by selling them dirty burning fuel sources. Wind, solar and other renewable energy sources are cheaper than they ever have been, and for much of the world are now a more affordable option than coal and other fossil fuels. Advanced economies would be better served helping developing nations adopt these energy sources and avoid the massive uptick in emissions that affect the entire planet. Collectively, the nations of the world have done enough to stave off the worst-case scenarios for climate change. Now they've done enough to keep emissions from rising. These are the bare minimums, the smallest steps toward progress. You have to crawl before you can walk, but we're rapidly approaching a moment when we need to run.

More like this
Another reason to legalize weed: It'll be better for the environment
By AJ Dellinger
The G7 countries promised to go green, then poured money into fossil fuels instead
By AJ Dellinger
Are carbon offsetting apps legit?
By AJ Dellinger
Stay up to date