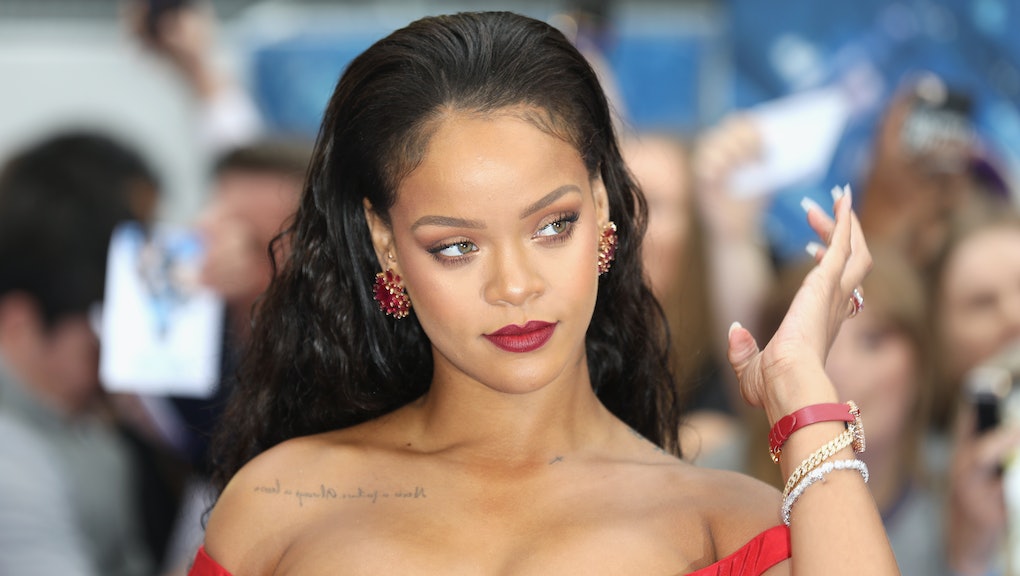 Honestly just give Rihanna all the money

Her musical hits are ubiquitous. It's hard to go anywhere without hearing a Rihanna track like "We Found Love," "Diamonds," or "Work" piped over a loudspeaker. But her discography isn't what made her a certified billionaire, according to Forbes. The bulk of Rihanna's estimated $1.7 billion fortune is thanks to her massively successful cosmetics line, Fenty Beauty.

Forbes noted that eye-popping number makes her the wealthiest female musician in the world, but all evidence indicates she's worth just as much (or more) than the richest male musical artist, Jay-Z, whose net worth Forbes puts at $1.4 billion. Rihanna's also now second only to Oprah Winfrey ($2.7 billion) as the wealthiest female entertainer.

Fenty Beauty, launched in 2017 with the goal of making products for women everywhere, is now worth a conservative $2.8 billion, Forbes estimates. Rihanna owns half of the company, meaning everything she earns from her other endeavors (Savage x Fenty, music, and acting roles) is icing on the billion-dollar cake. The other 50% is owned by French luxury goods conglomerate LVMH, and the guy who runs it, Bernard Arnault, is no financial dummy. He's worth more than $198 billion, neck-and-neck with Jeff Bezos and Elon Musk for the title of richest human in the world.

Selling foundation in a spectrum of 50 shades, Fenty Beauty is an enduring hit with consumers, too. By 2018, just a year after its launch, the cosmetics line was pulling in $550 million annually, outpacing makeup brands launched by stars like Kylie Jenner, Kim Kardashian West and Jessica Alba.

The rest of Rihanna's moneymaking endeavors are nothing to sniff at, either. This February, Savage x Fenty raised $115 million in funding, putting its valuation at $1 billion. The star retains a 30% stake, making her cut worth an estimated $270 million. Roc Nation boasts Rihanna is the top-selling digital artist of all time, with 60 million albums and 215 million digital tracks sold worldwide. Plus, she's had roles in blockbuster movies like Oceans 8 and Battleship.

Rihanna spends some of her fortune on high-end real estate and other nice things (who wouldn't?), but she's also a generous philanthropist. She's one of the most publicly charitable celebrities, and has donated nearly $8 million to coronavirus relief. Through her Clara Lionel Foundation, she's also given $2.1 million to victims of abuse in Los Angeles, $1 million to New York's needy and $5 million to other charitable causes, according to Forbes. The mission of Rihanna's foundation, named after her grandparents, is to shift "how the world responds to natural disasters through emergency preparedness and community resilience projects." She's invested in her home country, Barbados, donating modern radiotherapy equipment worth $1.75 million to a local hospital, for example.

It's usually easy to hate on billionaires, since lots of them (ahem, the dudes) are fixated on pouring their money into building penis-shaped rockets. But when someone as incredible as Rihanna joins the exclusive club, there's a lot to celebrate, because it means her glorious empire will keep growing. The Mic newsroom couldn't help but wonder... does this mean billionaires are good now?

Maybe not. But it's a strong argument for more fabulously wealthy women.

More like this
I never want Tucker Carlson to stop talking about Nicki Minaj's cousin's friend's enormous balls
By Rafi Schwartz
Steve from 'Blue's Clues' gave us the closure we didn't know we needed
By Kara Weisenstein
The 8 best reality shows you're not watching, but should be
By Brandon Yu
Stay up to date