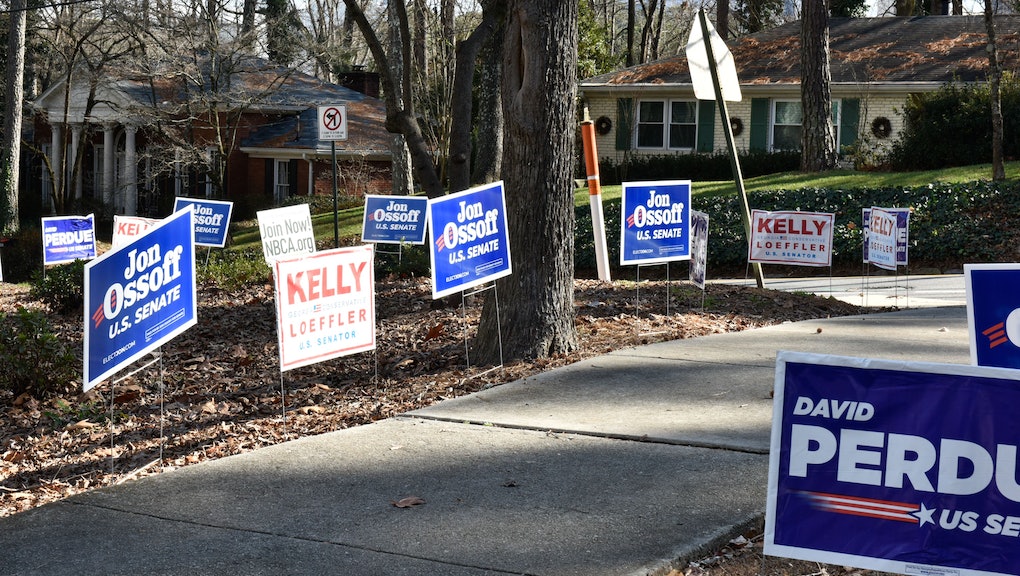 When Joe Biden takes office on January 20, 2021, he is expected to launch the most aggressive agenda to address climate change the country has ever seen. While some of that plan can be carried out via executive order, to truly push the types of initiatives needed to get serious about climate change, the Biden administration will need climate-conscious voters in Congress. Whether or not those votes will be waiting for him will be determined by today's Georgia run-offs, where the Democrats need to win both seats to reach a 50-50 split in the Senate, which will otherwise remain under Republican control.

Here is where each candidate stands on environmental issues, and what their election to the Senate could mean for efforts to combat climate change.

When it comes to climate change and environmental matters, Jon Ossoff might be the most progressive candidate on Georgia ballots for these run-off elections. He has not held office, so he has no voting record, but he's been running to represent Georgia since 2017 and has spoken a fair amount about his positions. Ossoff checks the most fundamental box, which is recognizing the scientific consensus that climate change is real and caused by human activity. He has called climate change "a threat to our security and prosperity" and has called for increased government action to address it.

Ossoff has also put his name to some actual policy ideas, including throwing his support behind the United States rejoining the Paris Climate Agreement. He's also called for an effort to undo many of the Trump administration's environmental rollbacks. Ossoff backed a ban on single-use plastics, and has made clear that he's strongly in favor of shifting away from fossil fuels and embracing clean energy alternatives, positing that Georgia could become “the leading producer of renewable energy in the American Southeast.” He has also pushed for a green infrastructure plan that would fall in line with President-elect Biden's own plan to modernize the nation's infrastructure.

All of that has been enough for Ossoff to secure the endorsements of the Sierra Club, League of Conservation Voters, and Environment Georgia. But he's also taken positions that fall short of what the most progressive voices in the room look for. Ossoff has said that he does not support the Green New Deal, and he's been relatively quiet on controversial topics like fracking.

If Jon Ossoff is considered insufficiently progressive because of his failure to back the Green New Deal, then David Perdue is downright regressive. He not only opposes the Green New Deal, but has weaponized it on multiple occasions and attempted to associate it with socialism. During a debate with Ossoff, Perdue complained that the climate-forward agenda put forth by Biden and Ossoff in their respective elections is an "outrageous spending plan" that amounts to "the greatest threat to Medicare and Social Security that we have in America today."

Perdue has a three percent lifetime approval rating from the League of Conservation Voters, meaning he has voted against environmental policies 97 percent of the time during his six years in the Senate. Of all the Senators, he received the third-largest quantity of donations from the oil and gas sector last year, according to data collected by the Center for Responsive Politics.

That said, Perdue isn't entirely in opposition to environmental matters. He co-sponsored the Great American Outdoors Act, a land conservation bill that provided funding for national parks and other federal lands to repair and upgrade vital infrastructure and facilities. He also put his name on the Save Our Seas 2.0 Act, which sought to reduce plastic pollution in oceans. Perdue was also part of a bipartisan effort to secure disaster relief funding for states impacted by Hurricane Michael, a category five storm that did significant damage to Georgia and other coastal states.

Raphael Warnock was a pastor before he was a politician, and his policies remain infused with his faith. As such, Warnock has taken to supporting environmental efforts, arguing that "the Earth is the Lord's" and therefore must be protected. Like his fellow Democratic candidate Jon Ossoff, Warnock backs the idea of the US re-entering the Paris Climate Agreement and undoing the environmental rollbacks carried out by the Trump administration. He's also lent his support to new investment in green infrastructure, acknowledging that his own state is likely at risk of rising sea levels.

Warnock is relatively short on details when it comes to his plans, but he has pushed forward a message of environmental justice. He has called for investments that specifically go toward communities of color and other marginalized people to provide them with resources and education to better understand environmental issues. That includes showing them how to improve their own lives through energy cost saving techniques. Warnock also wants to ensure that marginalized people receive training and education to help them find work in the green economy, which fits with Biden's plan to create millions of green jobs.

While Warnock does not have experience as an elected official, he has put action behind his beliefs in his personal life. At Ebenezer Baptist, the church where Warnock serves as a pastor, he partnered with the Clinton Foundation to make the building more energy efficient. He also hosted educational programs to teach his congregation about sustainability efforts that they could undertake. Warnock also played host to an interfaith meeting on climate change and environmetal justice as part of the Climate Reality Project

Like Ossoff, Warnock has received endorsements from the League of Conservation Voters.

Kelly Loeffler is a bit of a mystery. She's only held her Senate seat for a year, getting appointed to the position following the retirement of Republican Johnny Isakson. During that time, she's basically been silent on matters of the environment. Loeffler is yet to record a single vote on environmental issues, according to the League of Conservation Voters. She's also largely kept her lips sealed when it comes to discussing climate policy. She often backs Trump in any way that she can, and Trump's position on climate change is quite clear: he thinks it's bullshit. Loeffler has voted with Trump's position 92.3 percent of the time while serving in the Senate, according to FiveThirtyEight, making her one of the most pro-Trump members of Congress.

While her words don't tell us much, her supporters might reveal her true positions, or at least tell us the big donors who hope to have influence over her. She's raked in $563,303 in campaign contributions from oil and gas firms, according to the Center for Responsive Politics.

She's taken plenty of cash from big oil and likes to cozy up to Trump, but Loeffler certainly seems like she should know better when it comes to the environment. She once worked for Intercontinental Exchange, an energy trading company, that backed cap-and-trade legislation that would have set limits on pollution. She served as vice president of communications and investor relations while the company was pushing for fees on greenhouse gas emissions, so she certainly knows how to talk a good game when it comes to reducing our carbon footprint.