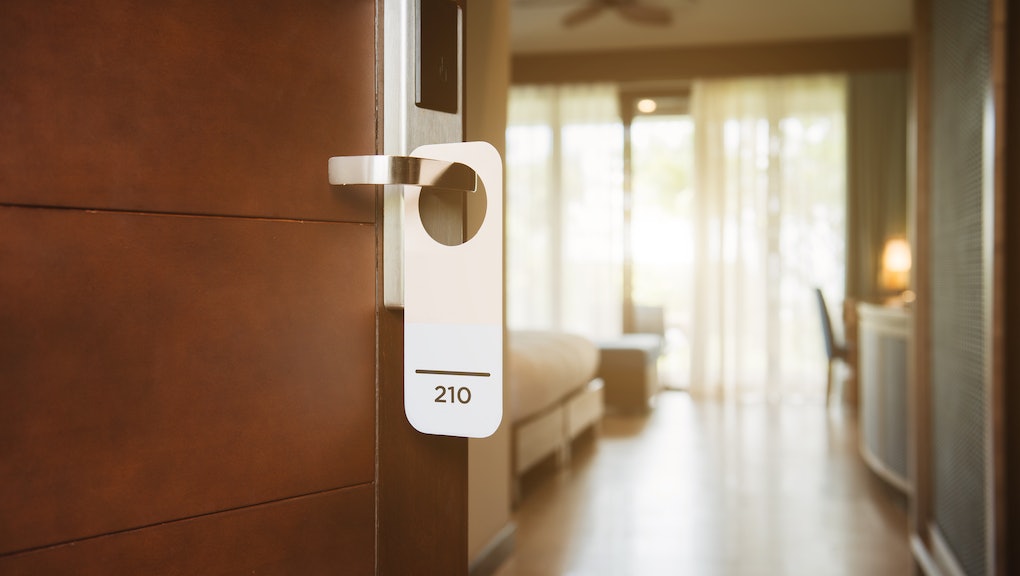 For many travelers, checking into your hotel and being greeted by an assortment of mini toiletries lining the bathroom counter is a staple experience. But recently, major hotel company Hyatt announced plans to reduce single-use plastics including those tiny shampoo bottles, becoming the last international hotel brand to do so. Although this may signal the beginning of the end of mini toiletries, it's a move that may have long-term sustainability benefits.

If you're a frequent traveler, chances are high that you've stayed at a Hyatt hotel before. The company has 900 hotels worldwide, CNN reported, and that includes 20 brands like Park Hyatt, Hyatt Place, and the Andaz. Last week, Hyatt issued a press release detailing three sustainability initiatives it plans to implement no later than June 2021. Along with switching out mini toiletries for regular-sized bathroom products, Hyatt is trying to tackle disposable water bottle use, too. The company will increase water stations in public spaces so people can refill reusable bottles and only provide bottled water upon request for meetings or events.

Hyatt's president and CEO Mark Hoplamazian described the company's purpose ("we care for people so they can be their best") as driving a global sustainability framework dedicated to addressing some of the most pressing environmental issues today.

“Plastic pollution is a global issue, and we hope our efforts will motivate guests, customers and, indeed, ourselves to think more critically about our use of plastic.” Hyatt's president and CEO Mark Hoplamazian said.

When it comes to climate change, plastic is a huge issue. It's one of the major contributors to ocean pollution, according to the UN Environment Programme, with 8 million tons of plastic ends up in the world's oceans every year.

Here's the thing about plastic: it doesn't go away once it reaches the ocean. It can stay in the water and get broken down into microplastics which can be harmful to aquatic life, especially if ingested. Or, plastic can end up on land again, where it'll either take at least 500 years to breakdown, or be accidentally eaten by animals there.

Other hotel companies have previously stepped up to combat plastic use. Both Holiday Inn-owner InterContinental Group and Marriott International, which have 843,000 and 1 million rooms respectively, already made the decision to stop using mini toiletries, CNN reported. But even if Hyatt is late to the game, that's better than never arriving at all.

Airports like San Francisco International Airport (SFO) are also stepping up. In August, SFO banned the sale of single-use plastic water bottles. The rule applied to all vendors across the airport.

In addition to businesses taking action, lawmakers are visiting the topic, too. Last month, California became the first state to ban single-use hotel toiletries. There is a transition period so large hotels don't have to make the change until January 2023 and hotels with under fifty beds have until January 2024.

"We have reached a tipping point for action and more needs to be done that transitions consumers and businesses towards more sustainable alternatives," Assemblyman Ash Kalra, D-San Jose, who sponsored the bill, said.

Obviously, these changes aren't the final solution. Hotels are still going to use plastic toiletries; they're essentially just switching to bigger bottles. But when it comes to tackling climate change, it's important to make big businesses reconsider their practices and implement changes.

More like this
Plastic Free July is the perfect opportunity to kick our pandemic habits
By AJ Dellinger
For a blessed 11 minutes, Jeff Bezos was not on Earth. Here's what he missed
By AJ Dellinger
How the Delta variant could mess with your summer travel
By Melissa Pandika
Stay up to date