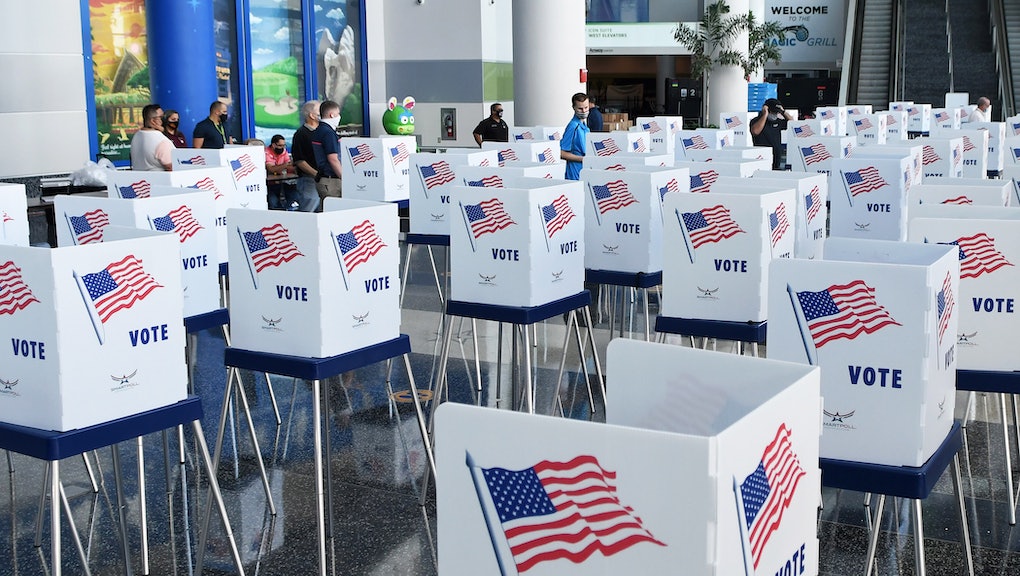 Ignore the polls and get out the vote

Twelve days before the 2016 election, Hillary Clinton had a 6-point lead in the polls. She was even beating Barack Obama’s 4-point lead over Mitt Romney four years earlier. Then former FBI director James Comey released the bombshell that he was re-opening the investigation into Clinton’s emails. Though Clinton won the popular vote by more than 3 million votes, just 80,000 votes in three swing states (Michigan, Pennsylvania, and Wisconsin) sent Donald Trump to the White House. The rest is history.

This time around, the numbers once again show the Democratic candidate ahead of Trump. In recent polls, Joe Biden is leading Trump in all three of these same swing states that Clinton barely lost. But in a recent interview with NPR, even Biden’s campaign manager Jen O'Malley Dillon cautioned supporters: “The very searing truth is that Donald Trump can still win this race, and every indication we have shows that this thing is going to come down to the wire.”

Biden’s current lead in the polls is as relevant to this year’s election outcome as Clinton’s lead in the polls was to the 2016 outcome. The same goes for polls of the U.S. Senate races, where Democrats must pick up three or four seats (depending on who wins the presidency) to win the majority. At the end of the day, polls predict the winners — but crucially they don’t determine them. Voters do. To guarantee a win for Biden, we must engage in direct political action that will drive likely Democratic voters to the polls until the last minute on Election Day.

The 2016 presidential election left many Democratic voters stunned. They had pinned their hopes on the polls, which showed Clinton with a comfortable lead. What that loss proved, if anything, is that a few days during an election season can be a lifetime. The race also highlighted the nature of polls themselves. They vary widely in methodology, and some may be more accurate than others. Polls are like people – they’re not perfect.

Here’s something to keep in mind. Campaign staff and volunteers don’t leave anything up to chance, regardless of what the polls show. And they know from their daily interaction with voters that Republicans are as active and organized as ever. Yes, Democrats are turning out big in the early vote at the polls. But Trumpers will likely turn out big on Election Day. And polls aren’t the only tools to predict election outcomes. A “sentiment analysis” model analyzing emotions expressed on social media points to a far tighter race, with Biden and Trump neck and neck.

Regardless, these last two weeks could be the last chance to reverse the U.S.’s steady march toward authoritarianism. Over 220,000 people in the U.S. have died of coronavirus, a virus that has disproportionately harmed Black, Latinx, Indigenous, the elderly, and immunocompromised communities. The Affordable Care Act is hanging on by a thread. Reproductive justice, immigrant rights, and LGBTQ+ rights are on the verge of extinction. Job losses and evictions are skyrocketing, and the climate crisis is reaching the point of no return. Over another four years, the Trump administration will likely flush what remains of voting rights down the toilet, ensuring that Democrats will never be in control of any branch of government again.

A second Trump term would spare no one. So ignore the polls and get out the vote.

Democratic candidates still need volunteers to call, text, and hand out their campaign literature to voters. This goes for candidates all along the ballot; candidates who are running in state house and state senate races have a large impact on your rights and quality of life, too. If you’ve spent the last nine months in isolation, you may be happy to know that training sessions for phone and text banks occur online, oftentimes with special guest appearances. Even Hollywood has gotten involved: Actor Mandy Patinkin and his wife Kathryn have created a phone bank tutorial, and this Thursday, you can make calls for the Biden-Harris campaign with Rep. Anna Eskamani (D-Fla.) and Star Wars’s Mark Hamill. (May the force be with you.)

Phone banking is especially important for local campaigns, where first-time candidates may not have much name recognition. For these phone and text banks, staff members will sometimes stay on the virtual bank with you while you’re contacting voters so that they can answer your questions. (To find out how to donate or volunteer, head over to the candidates’ websites.) And remember, it’s never too late to start volunteering during election season. Organizations and campaigns are happy to train you on how to phone or text bank.

As always, reach out to members of your community to help them formulate a voting plan for either early voting or for Election Day. And to help ensure a fair election, train to be a poll monitor.

There are two weeks left to end Trump’s barbarism and steer our nation back to a more democratic one. This is no time to let optimism interfere with engaging in direct political action. Work as hard as possible to get out the vote until the end of the day on Nov. 3. Regardless of the results, at least you will know that you did everything in your power to elect Democratic candidates.

This is no time to slow down. Make every single minute count.

More like this
The history of the LGBTQ+ Pride flag, from the OG rainbow to Progress Pride
By Vanessa Taylor
Supreme Court justices' political leanings: A guide to the 2021 court
By Vanessa Taylor
There are already 19 QAnon candidates running for Congress in 2022
By Rafi Schwartz
Stay up to date