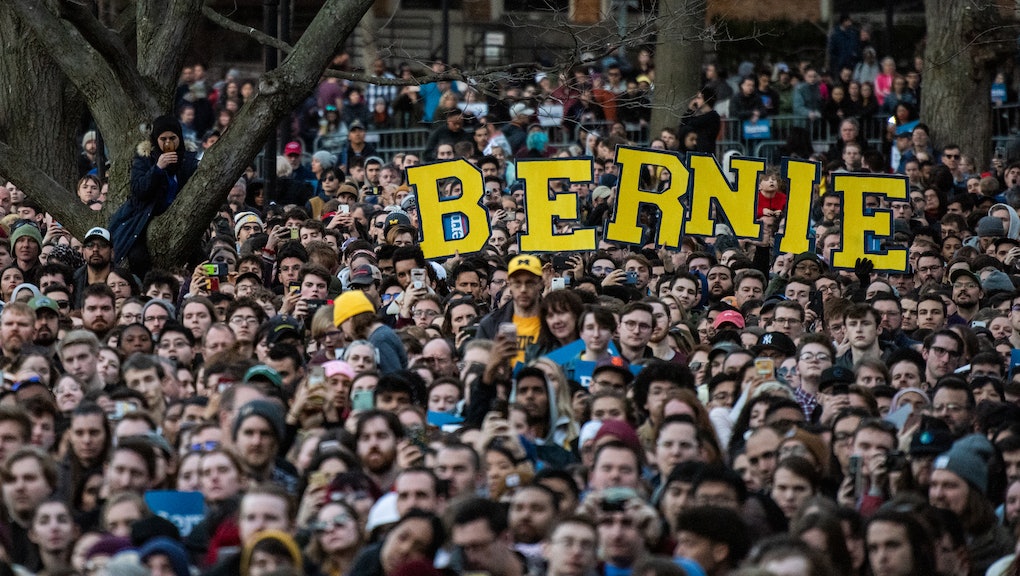 I'm 16. Here's why I organized for Bernie Sanders

It’s no secret that young voters are playing a big part in the Democratic primary. Specifically, they were the backbone of Bernie Sanders’s campaign; after Super Tuesday, Vox called the Democratic primary “generational warfare.” Despite Sanders’s recent exit from the race — after the primary results on March 17, former Vice President Joe Biden was all but certain to win the Democratic nomination — the progressive Vermont senator left an indelible mark for a generation of Americans under 30. The energy that his campaign built will continue long past the Democratic convention in July.

The Democratic establishment has often said that a candidate that relies on young voters can’t win — the younger generation votes infrequently and is often unreliable, the thinking goes. They might be right; older generations have always voted much more consistently. But they’re wrong that candidates can’t ever count on youth support. While it will be two years before I can vote, as a youth organizer, I’ve seen the effect Sanders has had on my generation, which is the most diverse this country has ever seen.

Our endorsement was evidence Sanders could attract youth support. The Democratic Party desperately needs to court young voters after 2016. President Trump’s election made us mad, and it’s Sanders who tapped into that anger and fueled our passion for changing a powerful, looming establishment that we (and plenty of other voters) don’t believe in anymore.

We backed him because he’s been rebelliously honest for over 50 years. He built a political movement that spoke to the activism we were already doing; he corralled a generation that joined the Women’s March and originated the youth climate strike movement and gave us a larger cause to join that aligned with everything we are already fighting for. The young people that drove the marches and protests of 2017 and 2018 contributed to an impressive ground-game for Sanders in 2020, too. Youth organizations like the New Hampshire Youth Movement and Sunrise Movement played a large role in Sanders’s victory in New Hampshire, for example, which helped to bolster his early-state surge. These movements were never his alone, but he benefited from their passionate members. By absorbing those causes into his presidential campaign, he elevated them to the national stage.

We backed him because he’s been rebelliously honest for over 50 years.

Throughout history, the one thing Democrats have had on their side is organizing power, and that’s how Sanders and his constituents planned to win. In 2008, Barack Obama won the presidency by reaching supporters through innovative organizing and prodigious use of social media. Similar efforts have boosted down-ballot Democratic campaigns this cycle, like the app Hustle, which provides supporters with ways to contact friends and family to increase get-out-the-vote efforts.

This is the most energetic and technologically innovative generation in years, and Biden clearly doesn’t have as much access to it; where the former vice president built his political bona fides with old-school retail politics, Sanders's social media strategy gained attention for its success even in 2016 (although this time around, the candidate was sometimes asked to answer for a small subset of his supporters who are aggressive online). Youth organizers have the vitality, connectivity, and network to put into action the new organizing tactics a revolutionary Democratic campaign needs.

When I organize, I’m not organizing for Sanders’s policies. While his stances on education for all, health care for all, and the Green New Deal will undoubtedly play a large role in my future, his policy agenda didn't sway voters as much as what some call his “power agenda” — how progressives plan to redistribute power within government. But the power agenda was about more than simply re-evaluating who gets to make decisions. I already believed in Sanders’s ideals before I supported his presidential run, and to me, his power agenda was at its core about empowering young people — by turning the causes we’ve been fighting for into an actual concrete vision of the future.

Biden is against many of the radical demands Sanders stood for, and in order to win against Trump in November, winning over Sanders's young base will be crucial. On Monday, Sanders himself took a step toward propelling Biden to victory this fall by endorsing his candidacy.

Yes, youth voters can be unreliable. Super Tuesday saw that only 11% of voters were under 30. But youth organizers like myself can’t be discounted. My personal organizing journey is not unlike so many of my peers. When I started with youth organizations dedicated to causes that I cared about, like women’s rights and the climate crisis, I began thinking about how our politics can serve the people most affected. I joined many of Sanders’s constituent organizations, like the Democratic Socialists of America. Recently, I started organizing for Jan McDowell, a progressive who ran for the U.S. House in Texas’s 24th Congressional District. With her, I fought to turn a seat that had been red for 18 years radically blue.

With those campaigns, I got to see what youth-driven change looks like. Turns out, it looks a lot like the change that will determine the outcome for 2020 and the future.

More like this
Live from New York: Revisiting the totally bonkers era of post-9/11 'SNL'
By Rafi Schwartz
This poll shows just how strong Trump's hold on Republican voters is
By AJ Dellinger
How the shock and confusion of 9/11 enabled our modern conspiracy era
By AJ Dellinger
Stay up to date