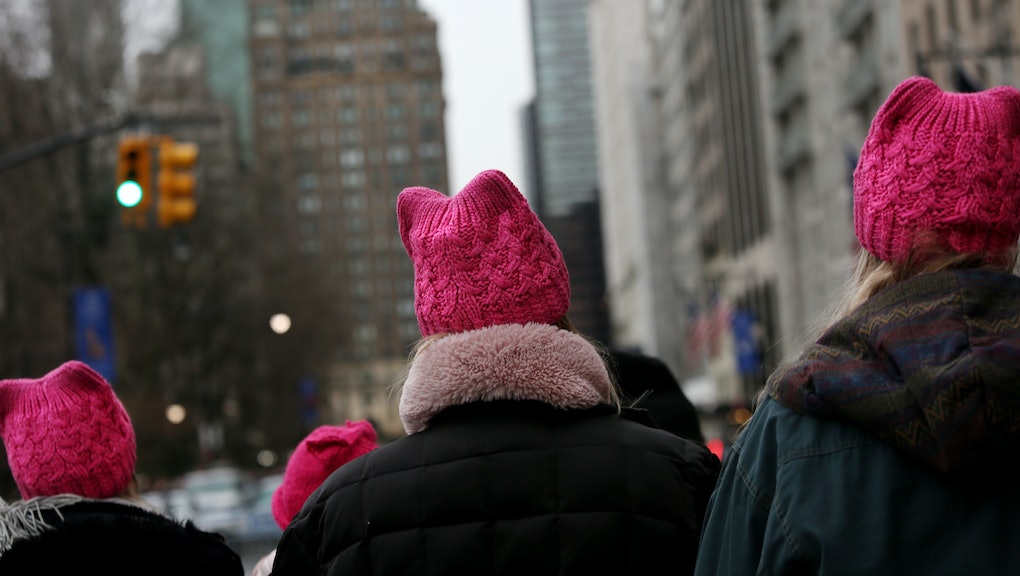 Is it futile to keep marching?

When asked if there will be a Women’s March next year, a member of the official board can’t answer the question. If Donald Trump is elected again, there probably will be. But entertaining the possibility that Trump will get a second term is a bit counterintuitive to the work the Women’s March is doing. After all, their main goal is a country free of a Trump presidency.

And if Trump doesn’t win in 2020, well, there’s no roadmap. The Women’s March was created as an emergency response, a way to triage a wound while it was still incredibly fresh. But now, with Trump acting as a cruelty accelerant, there are myriad threats to principles progressives hold dear. Threats to reproductive rights are happening at the same time as attacks on immigrants’ rights and low-income people. “We're in defense mode for sure. Partly because of the sheer volume of attacks that are coming down,” Rinku Sen, one of the new Women’s March board members, told Mic ahead of the Jan 18 march.

In 2017, protests were everywhere. Women marched on Washington and in small towns and in London and India. Pink hats, glittering signs, and furious shouts from crowds of people who were terrified about what was to come next dotted the globe. The resulting images were so powerful that someone felt the need to blur them in the National Archives.

The efficacy of the Women’s March itself — in its messaging, results, and parent organization — has come under increasing scrutiny with every passing year.

Just last week, mere days after the 2020 Women’s March — which championed reproductive rights, immigrant rights, and climate change as its leading issues — the March for Life took place in Washington D.C., with a cameo from President Trump. As an event centered around anti-abortion activism, the March for Life is the ideological antithesis to the Women’s March. It’s an increasingly successful movement that was built at the grassroots, and unlike the Women’s March, it’s well-established: March for Life has existed since 1973, as a response to Roe v. Wade.

The first Women’s March was designed to spur sustained political action. But the fury fizzled — or rather, it was diffused in too many directions. There were mass shootings, family separations at the border, Immigration and Customs Enforcement raids, travel bans, voter roll purges, and threats of war, not to mention the daily reminder that Roe was under threat every day. When Supreme Court Justice Brett Kavanaugh was confirmed to his position in late 2018, it was a low: Not only had a credibly accused sexual abuser been appointed to the high court, but his addition skewed the bench to its most conservative iteration in over 25 years.

All the while, the efficacy of the Women’s March itself — in its messaging, results, and parent organization — has come under increasing scrutiny with every passing year.

In 2017, the Women’s March felt like a watershed moment, and certainly plenty of now-politically engaged people found their footing taking to the street that first year. But after the walking and the banner-making, what happened the following week? Or a month later? Could there be one ubiquitous organization that could unify the various factions of the American center and the American left? The board members that preceded Sen and her colleagues couldn’t do it; that’s why three of the founding members of the board stepped down before the 2019 Women’s March.

Yet still, earlier this month, people came out to march. But the number of participants continues to dwindle. This year an estimated 10,000 to 25,000 people participated across the U.S., down from the estimate of 3 million to 5 million participants in 2017, which was the largest single day protest in U.S. history.

“One big characteristic of the Women's March is that many of the people who march with us and who come to us are first-time activists,” Sen explains. For organizers, this is ideally an introduction into activism, but the diminishing numbers of participants each year would signal a lack of success. Still, why people bundle up during the coldest month of the year to march in dissent goes beyond resisting the president. Now, they’re demanding fixes to issues much larger — and in some cases, more personal — than the individual in the Oval Office.

“I went because 1 of every 6 American women are sexually assaulted, yet the majority of cases never get a trial,” fourth-year Women’s March participant Jess Wojciechowski told Mic. Wojciechowski marched in Salt Lake City, Utah, along with several hundred other people. The Salt Lake City march was focused specifically on missing and murdered indigenous women, who go missing at a higher rate, and whose cases have been long ignored by law enforcement.

For Wojciechowski, it seems obvious that organizing and marching will continue after Trump is out of office. “Trump is only part of the problem in the United States,” she says. “Sexism existed before Trump was elected and as much as I hate to say it, it will continue happening even after his presidency.”

For so many of the attendees, the Women’s March is still a place to feel hope. “I go because it’s fun and empowering, and I go so when I look back on these troubling times I know I did my part even if I was just marching,” Lathan Salvi told Mic. She has turned attending the march into somewhat of a tradition. “I think there are always gonna be reasons to march,” she says. “The turn out may not be so big, but that’s okay.”

But if 21st century marches are more of a flash in the pan, rather than a larger part of sustained movement-building, are they still effective? That’s a harder question to answer when factoring in the influence that social media has had in modern marching. Whereas the March for Life was organized through lots of costly and time-consuming ground work, the Women’s March was born on social media, with a Facebook post, in a comparatively instantaneous fashion.

“Social media dramatically lowers the cost of organizing a protest, and it lowers the cost of participating in a protest,” Joshua Tucker, the co-director of the Center for Social Media and Politics at New York University, told Mic. “So social media becomes this kind of incredible tool, especially for people who don't have access to media themselves. Is there something about social media that makes it so easy to organize a protest that you don't have to do the hard work ahead of time building those movements? That's a hypothesis.”

Platforms like Twitter aren’t used only to disseminate organizing information about one event or another, though. Marches provide a highly visible moment of protest that some participants may feel is tailor-made for social media, but the sites also allow burgeoning activists to publicize their political beliefs to an audience without much deeper engagement. Just like you can search Instagram and find a thousand filtered and posed posts for #WomensMarch, you can do the same for #MarchForLife. A march, in the absence of further action and investment, has become as much of an Instagrammable moment as the Museum of Ice Cream or Hudson Yards.

"Action and education have to go together."

Yet for some, a march still feels like a way to bring tangible change. “I felt extremely empowered, as I always do, surrounded by women passionate for change,” Hope D’Ovidio, a college student in D.C., told Mic. D’Ovidio participated in the Women’s March this year representing She The First, a nonprofit organization that works to make sure girls are “seen, respected, and heard.” She wants a world where “equal pay, equal representation, across the board health care for women and trans women, maternity leave, and untaxed/free menstrual care,” are standard, she says. “I believe these marches are effective, rallying the city together to show we will not stand for this forces our government to change.”

It may be that social media impairs sustained movement-building because of how easy it is to join the high visibility, ‘gram-friendly marches. It’s one weekend afternoon, and maybe an evening before to make bright, pithy, punny signs. So does a productive march exist anymore?

“Just because you come together on social media for one purpose of attending a protest, it doesn't mean that that network actually disappears,” Tucker says, citing the outpouring during the 2018 midterms as a possible example of what can happen when millions of people march together. “You can see tangible examples of [social media] pages being repurposed to do other things,” like when event pages for marches become community posting boards for further local actions.

The question remains as to whether the Women’s March — the largest political protest of the last five years — is an example of that. The event’s new board members are trying to find a way to take its messaging beyond one day per year of boots on the ground. For the first time, the board members held teach-ins in the week leading up to the event this year, hoping to bolster engagement. “Action and education have to go together,” Sen explains.

“There are three issues that we are going to be working on in a deep way over time,” Sen says: “climate justice, reproductive health rights, and justice and immigration policy. But the march itself is going to be much bigger than those three issues.”

And that’s true for other marches and mass public demonstrations — including March For Our Lives, Black Lives Matter, and yes, March for Life. If March for Life wasn’t so well organized and consistent with its messaging, anti-abortion marchers might not attracted Trump to their event on Jan. 24 — the first time a sitting president has addressed the crowd there.

“Unborn children have never had a stronger defender in the White House,” Trump said at this year’s March for Life. He wasn’t wrong; while he’s hardly the deeply religious family man many envision as an evangelical’s dream president, Trump has garnered staunch support from that community based on his pledge to appoint pro-life judges, which he’s done quite successfully.

Is it possible for politics centered around one fading event to carry a movement? Maybe there’s no longer a need for a yearly Women’s March, and maybe that’s okay. A lot hangs in the balance of an unpredictable election year, where resisting Trump may give way to ushering in a new president. But none of the issues that the women interviewed for this piece are marching for will magically disappear if that happens. In Salt Lake City, there will still be people demanding that the missing and murdered indigenous women receive justice. There will still be fights for LGBTQ rights, reproductive rights, climate justice, and racial justice. There will be protests against deportations and border separation.

Will any of those battles lose ground without a dedicated march?