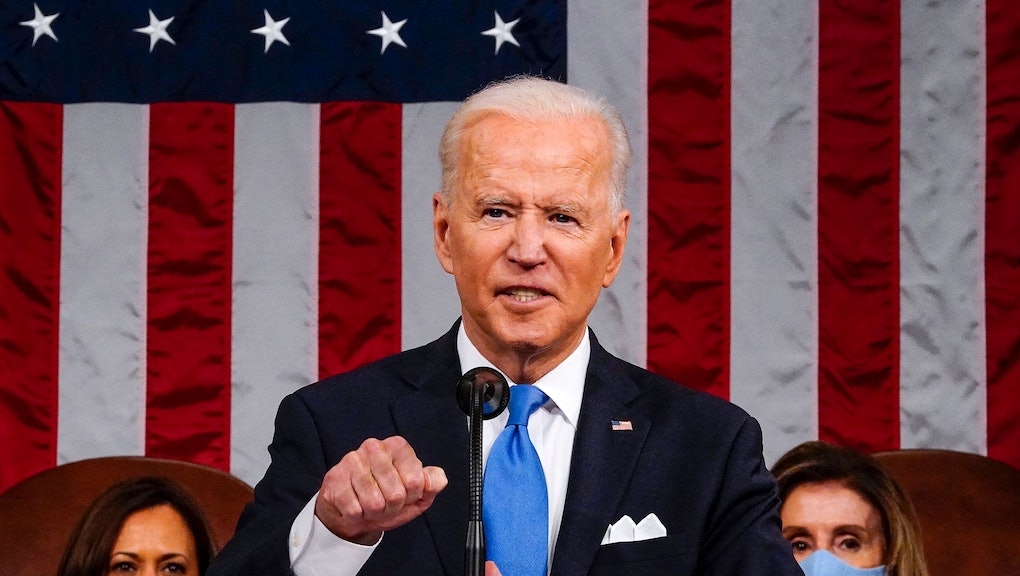 In his first address to Congress, Biden took on the country's vices: guns and police brutality

President Biden's first address to a joint session of Congress on Wednesday evening was a decidedly low-key affair for what is ordinarily an occasion for high pomp and circumstance. With attendance hampered by the ongoing coronavirus pandemic, Biden's speech — clocking in at just under and hour and a half — was delivered to a sparsely occupied House chamber, in which the usual trappings of a presidential address felt decidedly muted.

Nevertheless, despite the overall underwhelming atmosphere surrounding Biden's most consequential speech since his inauguration, the president's address contained a number of significant moments, signaling this administration's priorities moving forward, including — in some of the evening's most bluntly emotional moments — a demand for the government to finally deliver on the longstanding promise of genuine gun reform.

"I need not tell anyone this, but gun violence is becoming an epidemic in America," Biden declared, demanding an end to the "boyfriend loophole" that allows domestic abusers to own firearms.

"The flag at the White House was still flying at half-mast for the eight victims in the mass shooting in Georgia when 10 more lives were taken in a mass shooting in Colorado," he continued. "In the week in between those two events, 250 other Americans were shot dead in the streets of America."

Biden also called for universal background checks and a ban on "ghost guns," which are weapons built from kits without identification numbers and other traceable markings. And in a moment of rare deviation from the speech's overwhelming message of bipartisanship and commonality, Biden took aim at the GOP for standing in the way of what has time and again been shown to be an astonishingly popular initiative among the general public.

"I don't want to become confrontational," Biden said, "but we need more Senate Republicans to join the overwhelming majority of Democrat colleagues and close the loopholes requiring a background check on purchases of guns. We need a ban on assault weapons and high-capacity magazines."

"Don’t tell me it can’t be done," he added, in reference to the gun control bills passed under the Clinton administration when Biden was in the Senate. "We did it before, and it worked."

Biden's speech also briefly touched on the swelling calls for racial justice and police reform that characterized this past summer, and which have only grown in recent months with the police killing of Daunte Wright outside Minneapolis, just days before former Minneapolis police officer Derek Chauvin was convicted of murdering George Floyd this past spring.

"It was nearly a year ago, before her father's funeral, when I spoke with Gianna Floyd, George Floyd's young daughter," Biden said. "She's a little tyke, so I was kneeling down to talk to her so I could look her in the eye. And she looked at me and she said, 'My daddy changed the world.'"

"Well," Biden continued: "After the conviction of George Floyd's murderer, we can see how right she was if — if we have the courage to act as a Congress."

He went on to call for the Senate to pass the "police reform in George Floyd's name that passed the House already," in reference to the George Floyd Justice in Policing Act of 2021, which was narrowly voted through the House in March. Notably, while that act does ban chokeholds like the one used by Chauvin to murder Floyd on the federal level, it merely predicates federal funding for local police departments based on their use of the technique. In other words, even if the bill were to become law, there's no guarantee it would have saved its namesake's life.

With a nod to Republicans' "own ideas," Biden paraphrased Rev. Theodore Parker's iconic line by urging Congress to "bend the arc of the moral universe towards justice" and pass the Floyd act "next month" by the anniversary of Floyd's murder.

More like this
Biden's idea of filibuster reform is to bring back painfully long and boring floor speeches
By Vanessa Taylor
Trump kept a Gitmo prisoner detained for 5 extra years. Biden has finally freed him
By Rafi Schwartz
Republicans are in an excellent position to weasel their way back to House control
By AJ Dellinger
Stay up to date