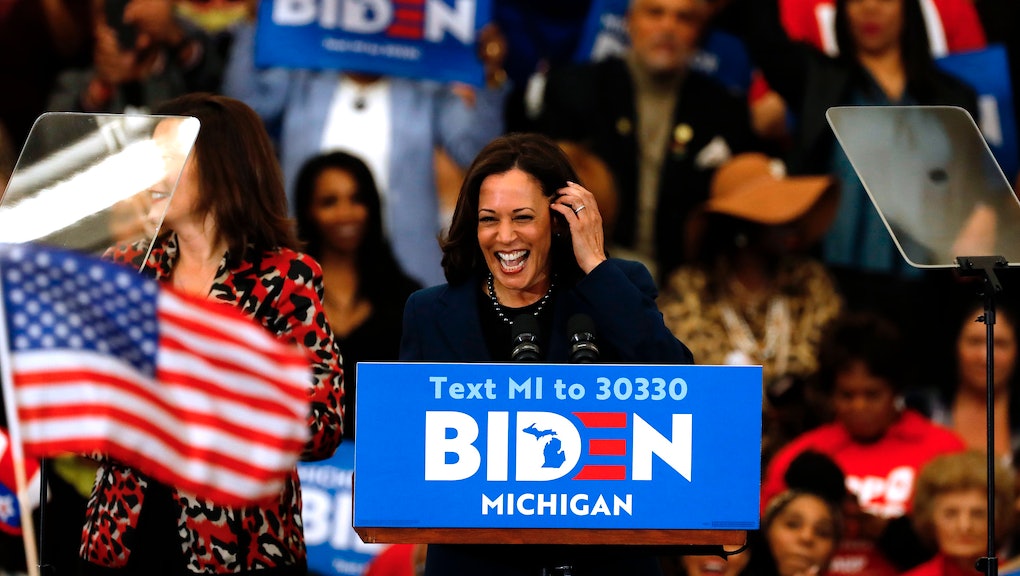 Biden had been expected to make his announcement any day, ahead of the Democratic National Convention next week. He reportedly broke the news in a text message to supporters that read, per The Daily Beast: "Joe Biden here. Big news: I've chosen Kamala Harris as my running mate," the text said. "Together, with you, we're going to beat Trump." In a follow-up tweet, he called Harris "a fearless fighter for the little guy."

Harris's selection is historic, as she is the first Black woman, as well as the first Asian-American, to be on a major-party ticket. As a candidate, she brings prosecutorial mastery to the race, having served as attorney general of California before building her profile in the Senate with her incisive, unforgiving questioning of many of President Trump's Cabinet nominees. And as woman more than 20 years younger than Biden who only joined the Senate in 2016, she brings a much-needed sheen of youth to the Democratic ticket.

But she and Biden clashed during the Democratic primary, most notably in an early debate when Harris called out Biden's history of opposing busing, compellingly invoking her personal experience of having been bused into a recently desegregated school. Still, the two share space in the more moderate side of the current Democratic Party, at least compared to other one-time presidential contenders like Sens. Bernie Sanders (I-Vt.) and Elizabeth Warren (D-Mass.). Harris endorsed Biden this spring, after her own campaign flamed out late last year.

Last month, Politico seemingly leapfrogged Biden's announcement, preemptively publishing a short blurb announcing Harris as the veep pick, alongside an apparent quote from the Biden campaign calling her "a worthy opponent and a worthy running mate."

Biden's vice presidential search was highly public and, after he pledged to select a woman to join him on the ticket, particularly heavy on the speculation and scrutiny once he locked up the party nomination. Other women thought to be high on the list recently are Susan Rice, the former national security adviser under President Barack Obama, and California Rep. Karen Bass — whom some think might be a contender to fill Harris's Senate seat should she and Biden win the election this fall.

Harris will officially debut as the vice presidential nominee on Aug. 17 during the Democratic National Convention.

This article was originally published on Aug. 11, 2020

More like this
Oops, the Arizona recount the MAGA crew demanded actually took votes away from Trump
By Rafi Schwartz
This poll shows just how strong Trump's hold on Republican voters is
By AJ Dellinger
I hope Marjorie Taylor Greene never logs off
By Rafi Schwartz
Stay up to date