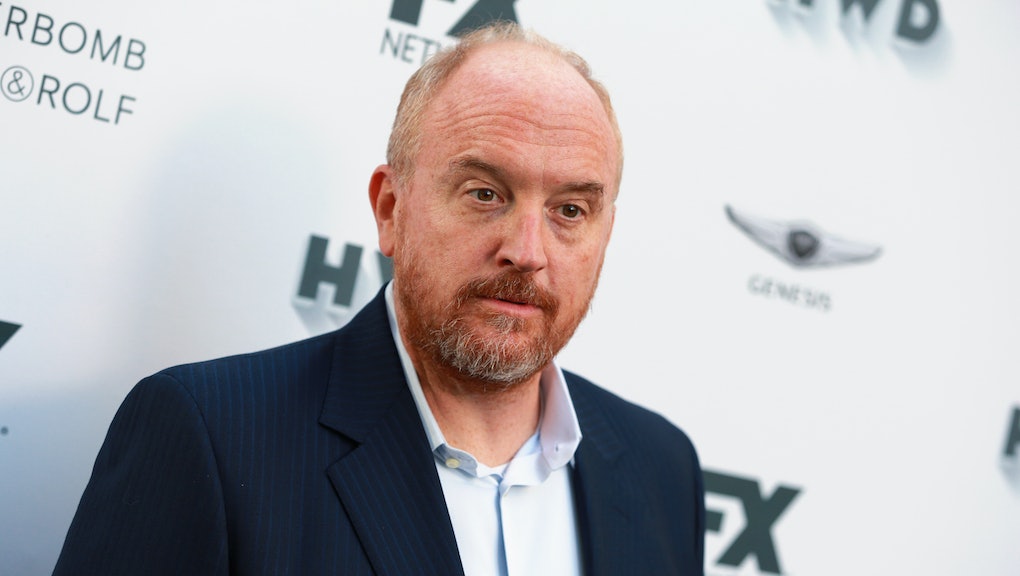 Louis C.K. will not go away quietly

Before the pandemic, Louis C.K. was selling out smaller theaters across the country to reactivate his career after facing widespread sexual misconduct allegations. He released his first special in more than three years this April, for those who wanted laughs during “this shitty shitty time.” In the special, he downplayed and joked about the allegations, including an especially noxious comparison of consent to slaves singing while they were forced to work.

Despite the ongoing pandemic, his comeback tour rolls on, with an appearance at a secret show hosted by Dave Chappelle last week. Following his evocative 8:46 special, working through raw, somber feelings in the immediate aftermath of George Floyd’s death at the hands of Minneapolis police, the comic’s been hosting secret “Chappelle’s Summer Camp” showcases outdoors in Ohio.

As the Hollywood Reporter points out, photographer Mathieu Bitton has documented Chappelle’s guests on Instagram, including David Letterman, Jon Hamm, Jon Stewart, Erykah Badu, and many more. Bitton recently posted a pair of photos featuring C.K., who was brought onto the show as a surprise guest last week. In one photo, he’s standing between Tiffany Haddish and Michelle Wolf, with Sarah Silverman and Talib Kweli — who was permanently banned from Twitter after launching a pernicious harassment campaign against the 24-year-old activist Maya Moody — elsewhere in the frame.

Chappelle’s support of C.K. is a given — he’s been rather candid about defending the comic, and smearing sexual assault survivors as of late — but some of the other entertainers are sticking their necks out in a more tangible way for the first time. Wolf, who rose to prominence after a searing White House Correspondents Dinner monologue and opened for C.K. on a 2016 arena tour, has been more quietly supportive over the years. In 2018, she both reduced a journalist’s questions about C.K. to “clickbait” that obscures the experiences of his victims and reportedly seemed “indignant and even a bit angry” when confronted by protesters outside of his early comeback set at the Comedy Cellar.

Since he was accused of widespread sexual misconduct in 2017, C.K. wasted little time in mounting a return. First were his under-the-radar shows in 2018, which found the disgraced comedy star cracking jokes about the Parkland kids, rape, and “losing $35 million in an hour,” following the allegations. He’d initially pledged to “step back and take a long time to listen,” but returned with his most reactionary material yet to receptive audiences and less favorable press coverage.

Situations like C.K.’s make it increasingly hard to take “cancel culture” arguments from beleaguered New York Times opinion columnists seriously. Louis C.K. is feasibly ruled out from prestige on the scale of Emmy and Oscar nominations, but if the demand arises again for him to headline Madison Square Garden again, he will. It’s so easy to see through this stuff time and again — after attaining a certain level of wealth and notoriety in the industry, you are effectively uncancelable from a commercial standpoint.

However, seeing a generally well-liked cabal of comedians cozy up to C.K. could be enough rationalization for more people to accept his comeback, and gradually mainstream it to the point of someone like Mel Gibson. Anyone with a moral compass can slash a line in the sand, and so many fans across the country will not, but every photo with the likes of respected comedians and entertainers just makes his transition back to industry normality easier than ever. That’s how this works, and his monetary value to the broader comedy scene and his peers will always take priority over the victims who faced far harsher consequences.