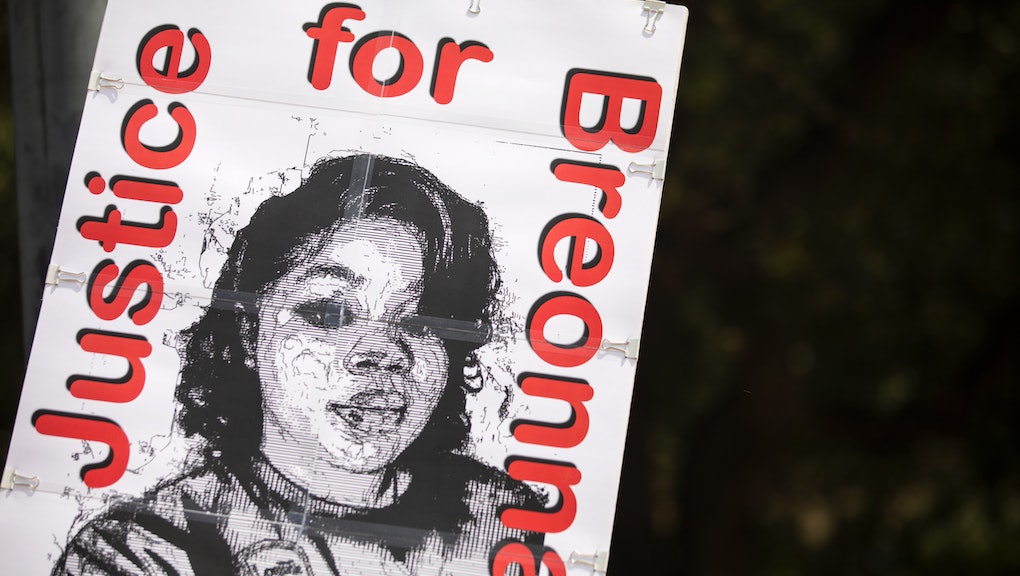 After Breonna Taylor, a 26-year-old EMT, was killed by police in Louisville, Kentucky during an early morning raid on her home, hundreds of thousands of protesters uplifted her name. But so far, the calls demanding justice for Taylor have largely gone unanswered by officials. And this week, the Louisville Metro Police Department (LMPD) declared a state of emergency ahead of the grand jury decision regarding her case — a move that, for many, seems to signal that justice will not come.

As a refresher, back in March, plainclothes police officers entered Taylor's apartment with a no-knock warrant. Believing the officers were intruders, her boyfriend, Kenneth Walker, opened fire, which prompted police to allegedly "blindly fire" bullets throughout the home. Officials then charged Walker with attempted murder of a police officer. Although the charges were dropped, Walker has filed his own lawsuit over his arrest.

Despite the fact that Taylor was killed six months ago, her case was only presented to the grand jury earlier this month. On Monday, Louisville chief of police Robert Schroeder, issued a memorandum "in anticipation of Attorney General Daniel Cameron's announcement" of the jury's decision. The order declared a State of Emergency for the LMPD and cancelled all outstanding day off and vacation requests "until further notice" to "ensure we have the appropriate level of staffing."

In addition to Schroeder's memo, sources told Wave 3 News that members of the department's Special Response Team, along with other units, were given orders to begin preparing for reactions to the grand jury decision.

The emergency declaration isn't the only action that the city or police have taken. In another sign that the city is expecting large-scale protests, some federal buildings in downtown Louisville — including the Gene Snyder United States Courthouse — have also shut down. In fact, the Louisville Metro Police Department cautioned "anyone with upcoming business downtown" that, "due to increased attention in anticipation of an announcement from Attorney General Daniel Cameron...a decision was made to accelerate plans to physically restrict access to the downtown area."

Many are taking the emergency declaration and LMPD's additional warning as a sign that the grand jury's decision will fail to hold the officers involved in Taylor's shooting accountable. The African American Policy Forum (AAPF), a social justice think tank, tweeted, "It's easier to shut down federal buildings, declare a state of emergency, and continue brutalizing protesters than it is to hold accountable the officers who murdered a Black woman in her home."

"Thousands took to the streets in Louisville to rebel against the notion that Black women's lives are expendable. For months, they've been protesting, lifting up Breonna's name, [and] demanding justice. The state has responded with violence and a refusal to hold officers accountable," the AAPF continued.

While a new law bearing Taylor's name now bans no-knock warrants in Louisville, and her family will reportedly receive a $12 million settlement from the city, protestors — and Taylor's family — are still seeking justice. Many say that the officers involved in the shooting — Jonathan Mattingly, Brett Hankison and Myles Cosgrove — have not faced severe enough consequences for their actions that night.

So far, only Hankison has been terminated for displaying an "extreme indifference to the value of human life" when he "wantonly and blindly fired ten rounds into the apartment of Breonna Taylor," per a letter tweeted by LMPD. Mattingly and Cosgrove were only placed on administrative leave, and none of the three have been arrested.