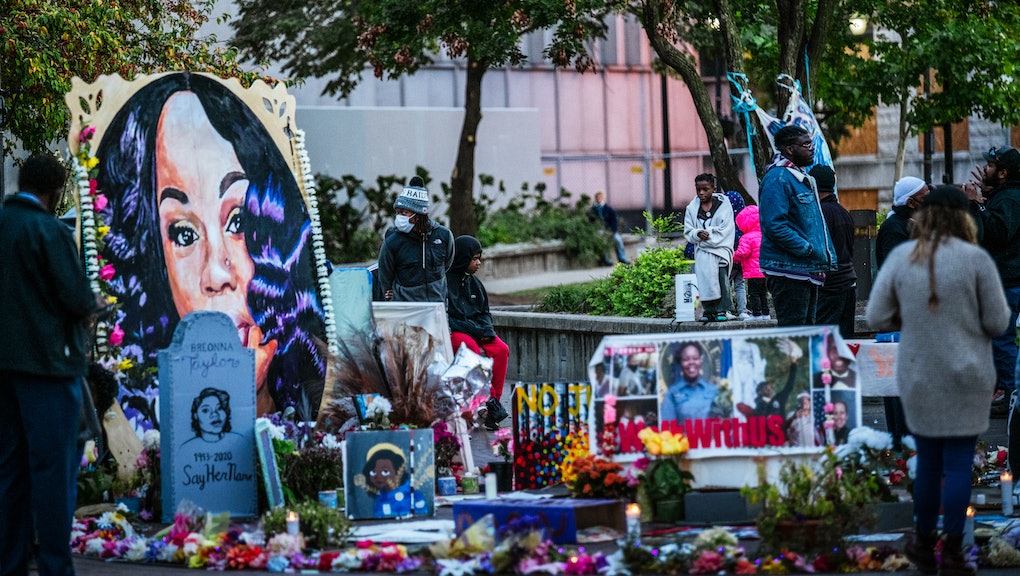 The Louisville Metro Police Department (LMPD) has fired two of the detectives involved in the March 13 killing of 26-year-old Breonna Taylor. The news comes ten months after the early morning raid on Taylor's home, in which plain-clothes officers used a no-knock warrant to enter the apartment unannounced.

Taylor, a Black woman, was asleep in her home just minutes before police shot and killed her. The police killing of Taylor was just one of multiple incidents from the late spring months of 2020 that incited a massive movement against racist systems of policing and the militarization of police. Though Taylor's case seemed clear cut to many, a Kentucky grand jury moved to not charge any of the officers with crimes related to Taylor's death. Only one individual, Det. Brett Hankison, who fired his gun into the apartment adjacent to Taylor's, was charged with a crime of reckless endangerment.

Now, two other detectives, only one of which was present at Taylor's apartment on the night LMPD officers killed her, have been terminated from their positions. Both detectives, Joshua Jaynes and Myles Cosgrove, were notified last week of the intention to terminate them from their positions with the LMPD for different reasons. Per NBC News, the LMPD fired Cosgrove for "deadly force and failure to activate his body-worn camera," while Jaynes was fired for "departmental violations" related to his procurement of the no-knock warrant. A lawyer for Jaynes said that he planned to appeal the termination, and Cosgrove has not indicated if he'll take further action.

The officers who killed Taylor have expressed little or no public remorse for their actions, with one even saying in September 2020 that the police work was "legal, moral and ethical." Shortly after her death, Taylor's family filed a wrongful death suit against the city of Louisville, which amounted to $12 million. As Mic previously pointed out, "the settlement amount isn’t necessarily a strong message to the police department, but rather a tab that Louisville citizens are forced to pick up."

When it comes down to it, firing detectives, charging one detective with a crime, and awarding a million-dollar settlement is neither an apology nor an admission of wrongdoing. Most importantly, none of these things can bring back Taylor.