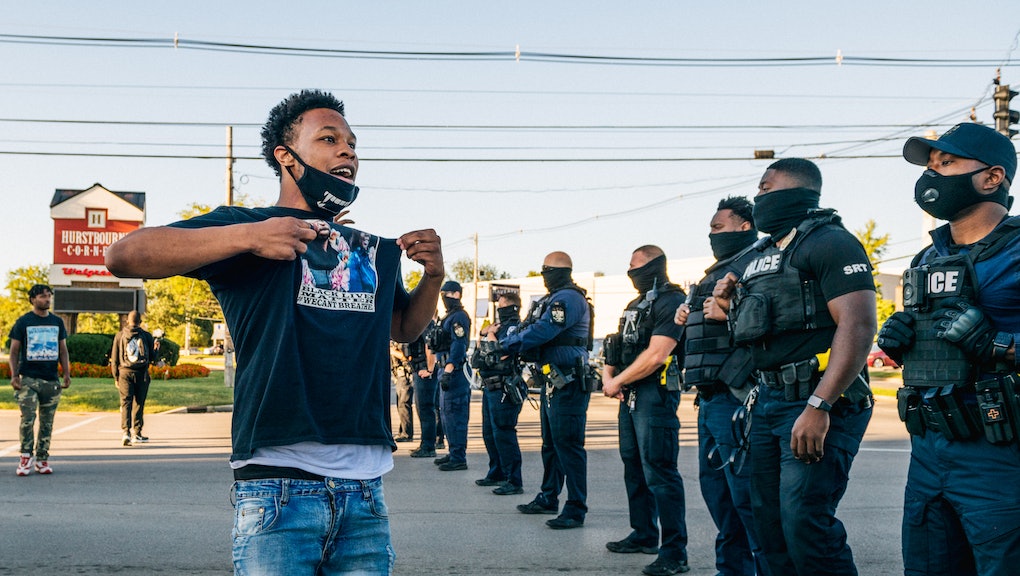 After several months of uncertainty, Louisville, Kentucky police signaled that a grand jury decision regarding Breonna Taylor's killing is imminent, with an announcement likely coming this week. In the meantime, Jonathan Mattingly, one of the officers involved in Taylor's death, has made it clear that he has no remorse. Rather, he believes his actions that night were "legal, moral and ethical."

Mattingly, a sergeant with the Louisville Metro Police Department (LMPD) who is currently on administrative leave, shared his thoughts — essentially a justification of Taylor's killing and a vilification of protestors — in a meandering, 2 a.m. email to his colleagues, which was reported on Twitter by Vice News correspondent Roberto Aram Ferdman. In the email, he referred to protestors at "thugs," officers as "warriors," and his plight as a "good versus evil" situation.

On March 13, Mattingly was one of three officers who attempted to serve a "no-knock" warrant in the middle of the night to the apartment where Taylor and her boyfriend Kenneth Walker lived. However, a suspect in the case they were working on had already been detained, and it was unclear what purpose the warrant had. The nature of the warrant meant the officers didn't need to announce themselves before entering the apartment; and having believed that the intruders were not officers, Walker reportedly opened fire, injuring Mattingly. Officers shot back and killed Taylor, a 26-year-old EMT.

In his email to approximately 1,000 fellow officers, Mattingly apologized not for Taylor's death, but for the "position" that local police — himself included — are now in. "The position that allows thugs to get in your face and yell, curse and degrade you. Throw bricks, bottles and urine on you and expect you to do nothing," he wrote, later continuing, "the position that if you make a mistake during one of the most stressful times in your career, the department and FBI (who aren't cops and would piss their pants if they had to hold the line) go after you for civil rights violation."

Mattingly's attorney confirmed his client sent the email, while an LMPD spokesman said "the matter is under review," according to the Louisville Courier Journal.

To be clear, as activist Brittany Packnett Cunningham pointed out on Twitter, Mattingly is "not only NOT SORRY or regretful-but he is OFFENDED at the mere *thought* that he might be held accountable for killing a woman in cold blood."

Sam Aguiar, an attorney for the Taylor family, similarly underscored Mattingly's audacity in suggesting that he is the victim in this situation. "An unarmed Black woman whose home never should've been raided was shot (five) times and died at the hands of Mattingly and his colleagues," Aguiar said, according to the Courier Journal. "Mattingly gets to go home to his family every day. Then they covered it up. So, respectfully, Mattingly's definition of 'moral' and 'ethical' actions are insulting to anyone with common decency. His characterization of protesters as 'thugs' is reprehensible. This department has instilled a culture which needs to be changed."

Earlier this month, the city of Louisville announced a $12 million settlement with Taylor's family, while the FBI investigation is still ongoing. Since Taylor's death in March, and propelled by protests after the police killing of George Floyd on May 25, protestors have taken to the streets in Louisville every night demanding justice for Taylor.

More like this
The Chauvin trial is incapable of delivering real justice
By Vanessa Taylor
The police killing of Daunte Wright inflames existing anger in Minneapolis
By Rafi Schwartz
Derek Chauvin's former boss, the Minneapolis police chief, just testified against him
By Rafi Schwartz
Stay up to date