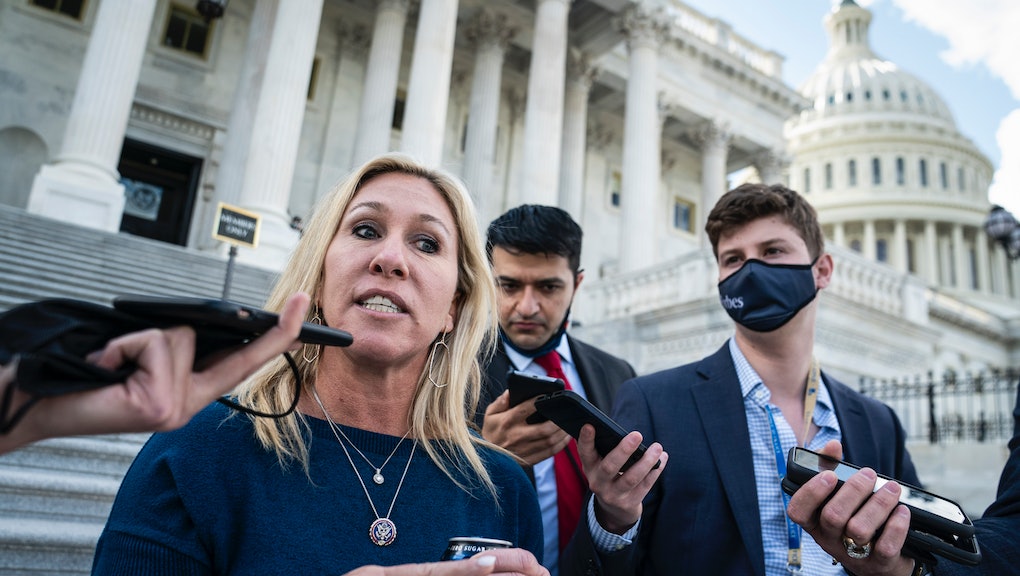 I suppose it shouldn't come as that much of a shock that Georgia Republican Rep. Marjorie Taylor Greene would declare herself a proud anti-evolutionary disbeliever. This is, after all, a person who has essentially declared war on our baseline reality as perhaps the single most prominent QAnon adherent in public life today. And yet, watching Greene declare unambiguously that "I don’t believe in evolution" is still jarring, considering how much influence she wields within the GOP.

Appearing this week on accused (and subsequently pardoned) criminal Steve Bannon's "Real America’s Voice" podcast, Greene waxed philosophical about the Coronavirus pandemic, and the popular — but fully unsubstantiated — insinuations that the disease was deliberately engineered in China.

"Why is there any need to create a virus that could spread rapidly to a population, to make people sick and kill them?" Greene mused as part of a long riff on why Chief Medical Advisor to the President Anthony Fauci should be arrested. "That is a bioweapon."

Pressed by Bannon on whether she accepted the logic of experimenting on viruses in order to determine vaccination protocols, Green rejected the notion, claiming "I don't buy it, because I don't believe in evolution."

While skepticism over evolution is hardly an uncommon trait, particularly among Republicans (former Vice-President Mike Pence was notoriously circumspect when asked about his views on evolution in 2009) Greene's proclamation is particularly dangerous. By linking her religious absolutism with a global health crisis, she has weaponized a faith-based argument in the service of a political agenda. At the same time, she is stoking both racial bigotry, and medical skepticism at a crucial moment in which both are contributing to very real pain and trauma across the country, and the world as a whole.

Is her declaration against evolution the craziest thing Greene has ever said? Not by a long shot. But, with the virus still rampaging across the planet, and a sizable portion of the country willing to take her inane ramblings at face value, it's possible that it might be her most dangerous statement yet.