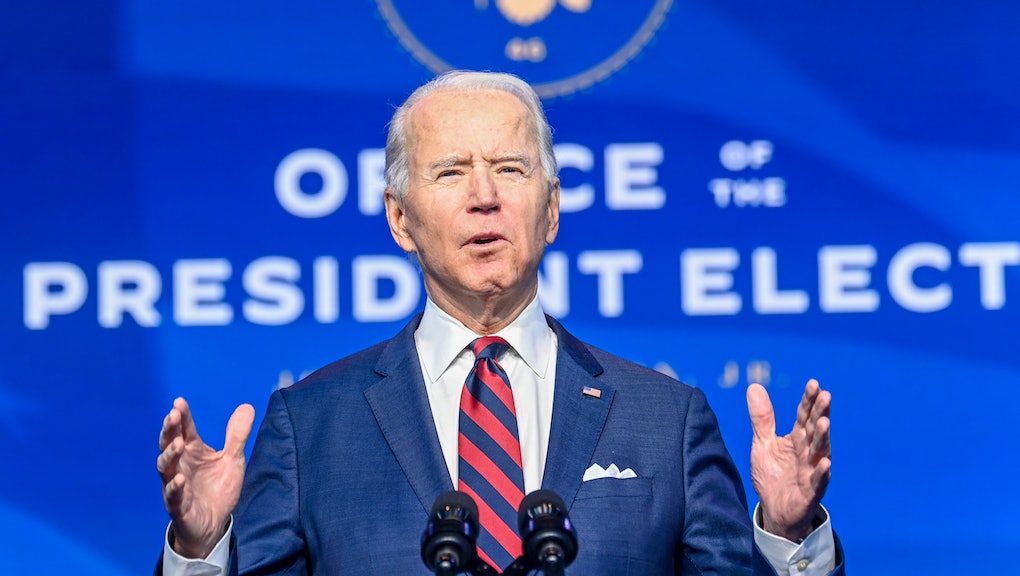 Meet the people who will be guiding Biden's environmental policy

During his presidential campaign, Joe Biden promised to make addressing climate change a top priority for his administration. On Saturday, the president-elect announced the members of his cabinet who will help make good on that promise. During a press conference on Saturday, Biden announced his choices to run the Environmental Protection Agency, Department of the Interior, and Department of Energy — three of the most consequential positions in crafting environmental policy.

With the team in place, pending Senate confirmation, it's worth getting familiar with the faces who will lead the country's response to climate change, which Biden recognized as "the existential threat of our time."

Biden announced on Saturday that he will nominate Michael Regan, currently the head of the North Carolina Department of Environmental Quality, to take over leadership of the EPA. Regan, 44, would become the first Black man to lead the agency and could provide a newfound focus on environmental justice. That would provide a much-needed shift in perspective following the Trump administration's disastrous policies that have harmed not just the environment as a whole, but marginalized communities that often bear the brunt of the effects of pollution.

Regan is no stranger to the EPA. He spent 10 years in the agency as an environmental regulator, serving under both the Clinton and Bush administrations. He left the EPA in 2008 to join the Environmental Defense Fund (EDF), a nonprofit environmental advocacy group, where he became the associate vice president for clean energy and a Southeast regional director.

Regan left the EDF in 2017 when North Carolina's Governor Roy Cooper named him secretary of the state's Department of Environmental Quality, the highest environmental post in the state's government. Under his leadership, North Carolina reached a multibillion-dollar settlement with Duke Energy over the corporation's history of polluting rivers and groundwater with coal ash. The company was also required to excavate nearly 80 million tons of coal ash from six of its facilities around the state to prevent future environmental hazards. The settlement set in motion the largest coal cleanup effort in the country. Regan also established an environmental justice advisory board while leading North Carolina's environmental regulator, and had a history of bipartisan success, working with a largely Republican legislature in the state.

“Regan will take the EPA’s helm at perhaps the most critical moment in the agency’s history, and he has to do much more than just mop up the toxic mess left by Trump,” Kierán Suckling, executive director of the Center for Biological Diversity, tells Mic. “Regan has to move with lightning speed to launch bold new efforts to combat the climate crisis, save people and wildlife from pollution and fully protect the air we breathe and the water we drink.”

Deb Haaland, Secretary of the Interior

On Thursday, Biden selected Deb Haaland to serve as the secretary of the Department of the Interior. Haaland, 61, who currently serves as the Congressional Representative from New Mexico's first district, will become the first-ever Native American Cabinet secretary and will play an important role in reshaping the federal government's relationship with Indigenous communities that have been forgotten or, worse, pushed aside and exploited.

Haaland is a member of the Laguna Pueblo tribe and was the first Native American woman to be elected to Congress when she won her seat in 2018. In her short time in Congress, she's managed a nearly perfect score on environmental votes, according to the League of Conservation Voters. She has served as the vice-chair of the Committee on Natural Resources and chair of the Subcommittee on National Parks, Forests, and Public Lands — experience that will prove vital as she is set to lead the agency that manages and sustains all of the nation's federal land.

She threw her support behind the Green New Deal during her time in Congress and has signaled that she backs a ban on fracking, an issue Biden has avoided taking a clear stance on. Environmentalists and other groups have pushed for the Biden administration to end all drilling and fracking on federal lands, which Haaland would likely support. Haaland notably showed up to support the Standing Rock Sioux tribe's protest against the Dakota Access pipeline, the controversial oil pipeline that cuts across native land. Her position on these issues signals a newfound focus on environmental justice that will take into account Indigenous people and their land, which has often been disregarded by the prior administration.

Leading the Department of Energy under the Biden administration will be Jennifer Granholm, the former attorney general and governor of Michigan. Granholm presents an interesting fit at the agency, as she brings a considerable amount of experience managing environmental issues, including dealing with the automotive industry that is essential to Michigan's economy. She's expected to bring a perspective that will push the country toward clean energy, though much of her job at the agency will entail managing the nation's large nuclear arsenal.

During her time as Michigan Attorney General, Granholm carried out a number of lawsuits against polluters and industry interests, including settling a large case in which the state sued a golf course construction company for illegally discharging sediment into Lake Michigan. When she ran for governor of the state, she pushed for efforts to diversify Michigan's economy to be less reliant on the automotive industry and gas-guzzling vehicles.

She's expected to bring that perspective to the Energy Department, where she will likely help carry out the Biden administration's attempts to shift away from gas-powered vehicles and toward electric cars. She may also shift the scope of the Energy Department entirely, as it has largely become an agency focused on nuclear energy, and more specifically nuclear weapons. Even Rick Perry, the head of the agency under Trump, was stifled by this, as he thought he would be a steward for the nation's gas and oil interests but was relegated to maintaining the nuclear defense systems.

“Granholm has the vital role of turning the Department of Energy 180 degrees to confront the climate emergency head-on," Jean Su, director of the Center for Biological Diversity’s Energy Justice program, tells Mic. "She’s coming to the helm when we simply have no more time to waste to avoid climate catastrophe. Granholm must usher in the end of the fossil fuel era by ending fossil fuel subsidies. And she needs to ignite a clean energy revolution by funding distributed and community solar and pushing groundbreaking battery and storage technology research.”

While the administers of federal agencies will have to be approved by Congress before they can actually take the helm, the Biden administration has tapped several people who will be able to serve without requiring Congressional approval. One of those leaders will be Brenda Mallory, who will lead the federal government's Council on Environmental Quality.

Mallory is currently serving as the director of regulatory policy at the Southern Environmental Law Center. She spent more than 15 years in various roles throughout the EPA under Bush and Obama, including serving as the agency's principal deputy general counsel.

Recently, Mallory led the Climate 21 Project, which provided the Biden administration with recommendations on appointments to federal positions. Their goal was to guide the incoming administration to pick people who will prioritize addressing climate change. Given her leadership of the group, Mallory is a fitting selection to take on the role of heading up the Council on Environmental Quality, a position that Climate 21 Project says is "best suited to elevate environmental justice to the White House and to lead the agenda on climate change resilience."

The Council on Environmental Quality is typically a role that operates behind the scenes, providing analysis of environmental impact for federal infrastructure projects. It is expected that the role will be expanded under Biden's administration and will be tasked with facilitating climate-forward policy both through the executive branch and through other federal agencies.

There has never been a national climate advisor serving the president, but that will change under Joe Biden. He is creating a new position solely to help the executive branch coordinate its climate agenda, and is tapping former EPA administrator Gina McCarthy to lead it. McCarthy is plenty familiar with Biden, as she served as the assistant administrator for the EPA’s Office of Air and Radiation from 2009 to 2013, under the Obama-Biden administration. She was then promoted to administer of the agency, a position she held from 2013 to 2017. Most recently, she served as the president and CEO of the Natural Resources Defense Council (NRDC).

McCarthy has a good idea of what the Biden administration will be facing in the wake of Trump, as the NDRC sued the outgoing administration 100 times for environmental violations. She also brings plenty of knowledge about the inner workings of the EPA and can help guide policy in a way that doesn't require dealing with a likely adversarial Congress.

"Gina McCarthy will provide the strong leadership necessary to coordinate this nation’s response to the climate crisis and to advance innovative solutions to move our country toward a stronger economy working collaboratively with the business community,” David Levine, co-founder and president of American Sustainable Business Council, tells Mic. “She has demonstrated that economic prosperity is not only at odds with environmental protection, but in fact, the steps needed to protect our planet can be a key economic driver in the 21st Century."

While McCarthy has the experience for the role, not all parties are excited to see her name attached to the incoming administration. Brett Hartl, government affairs director at the Center for Biological Diversity, suggests that she didn't go far enough during her tenure as EPA administrator. "Unfortunately, during McCarthy’s tenure at the EPA, she enacted far too many timid half-measures that merely tinkered around the edges," he says. Hartl notes that now is the time for "bold, urgent action," and says, "We hope she’ll push immediately for the bold climate action that is desperately needed now."