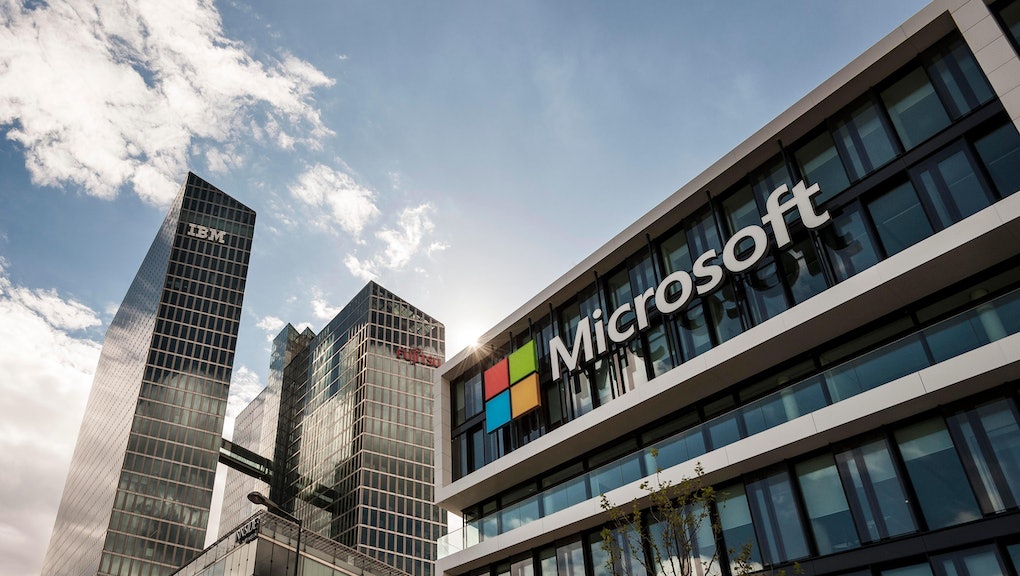 Corporations are finally coming around to the fact that climate change is real, human-caused and likely to produce devastating consequences if not addressed. That realization — along with the fact that it'd probably be hard to profit off a decimated earth — has a number of companies making the pledge to become carbon neutral. Microsoft is taking it one step farther. Company president Brad Smith announced this week that the computing giant will set a goal of being carbon negative by 2030 and act to remove all of Microsoft's previous carbon emissions from the atmosphere by 2050.

What is carbon negative?

Microsoft's goal is a plenty ambitious one, starting with its first benchmark of reaching carbon negative status. To understand what this is, it's first important to know what carbon neutral is.

Carbon neutral has become a bit of a buzzword among corporations that want to present themselves as being climate conscious and sensitive to their environmental impact, but it does have a true definition: ensuring that activity releases a net result of zero carbon emissions into the atmosphere. This doesn't mean that a company eliminates all of its carbon emissions, though. Instead, the idea is for those businesses to limit emissions as much as they possibly can, then compensate for the carbon they cannot fully eliminate, typically by purchasing carbon offsets. Developed by the United Nations and nonprofit environmental groups, carbon offsets are essentially credits that companies get in return for funding projects that reduce the effects of carbon emissions on the atmosphere — things like purchasing trees for reforestation projects or providing funding that helps reduce the cost difference between renewable energy projects and traditional, fossil fuel burning options.

Microsoft has been carbon neutral since 2012, and what the company is planning to do goes behind achieving a carbon neutral state. It wants to be carbon negative by 2030, which means that it won't just cut down on and offset its own emissions — it will actively remove carbon from the atmosphere. Carbon negative is a bit of an odd phrase, as "negative" seems to imply something bad when it's actually referring to the net amount of carbon that an entity is producing. That's why some have branded this goal "climate positive" instead, though no matter what you call it, it has the same goal in mind: removing carbon from the atmosphere.

Carbon negative status is achieved very similarly to how companies get to carbon neutral: they limit their emissions as much as possible and purchase offsets to account for the rest. But, instead of stopping at reaching neutral status, the company should go above and beyond, either by actively removing carbon from the atmosphere itself or by paying for enough carbon offsets to actually eliminate more carbon than produced.

How will Microsoft get to carbon negative?

Microsoft's path to accomplishing carbon negative status will be a challenging one, but it will start by ditching fossil fuels entirely. The company is planning to source all of its electricity from renewable energy sources — a goal that it believes it can achieve by 2025. That includes all data centers that the company operates, which have quietly become significant contributors of carbon emissions as more and more data is stored in these centralized systems. It will also start charging companies that it does business with for any carbon generation that they contribute to the supply chain — similar to the fee it set up for its internal divisions in order to encourage them to cut back their carbon. The company will round out its carbon negative goal by going electric with its global vehicle fleet and pursuing International Living Future Institute Zero Carbon certification and LEED Platinum certification — two designations for structures that were built in an eco-friendly manner — for all of its buildings on its Silicon Valley and Tacoma, Washington campuses.

While these actions will help Microsoft cut back its emissions to the bare minimum, the real task will be for the company to get over the hump and achieve its carbon negative goal. In order to do that, Microsoft is implementing an internal carbon tax. Starting in July of this year, the company will expand its aforementioned fee to include any carbon generated by travel. All money generated by these internal fees will go toward paying for new sustainability initiatives, including the carbon capture tools that Microsoft will need to get to carbon negative status.

Right now, carbon capture technology is not up to snuff to meet the needs of a company like Microsoft. There are new developments happening on the regular that suggest that carbon can actually be removed from the atmosphere and even repurposed into a fuel source, but there aren't very many commercially available or viable tools to do it at a large scale. Right now, carbon removal is expensive, costing up to $600 per ton, according to The Verge. With Microsoft expected to produce about 16 million metric tons of carbon this year, it would cost the company $9.6 billion just to remove all of its 2020 emissions from the atmosphere. That isn't feasible for most companies, but Microsoft intends to try to help bring that price down by investing $1 billion into the development of carbon removal technology. By helping to expand and kickstart the creation of this technology, it could help to bring down the overall cost of the carbon removal process and make it more viable not only for Microsoft but for other companies, large and small.

Once that technology is in place, Microsoft plans to not just remove its current carbon emissions from the atmosphere but to suck out enough carbon to offset all of the emissions that it has been responsible for since it was founded in 1975. Assuming the company's timeline is correct and carbon removal technology becomes viable, it believes that it will erase its entire carbon emissions history by 2050 — and will continue operating as a net carbon negative company well into the future.

It is worth noting that while carbon capture and removal are not without their critics. While the tools present a fair amount of promise, some believe that they let companies off the hook, allowing them to continue their polluting ways and simply buy their way out of criticism, allowing them to operate same as they always have, free of guilt, rather than truly address the causes of climate change.

Are other companies promising carbon negativity?

Microsoft is not alone in its plans for a carbon negative future. The owners of Drax, a United Kingdom-based power plant, announced that its entire operation would be carbon negative by 2030. The significant transformation of the plant, which accounts for five percent of all of the U.K.'s power, will be achieved by planting trees that absorb and remove carbon emissions from the atmosphere and introducing carbon-capture technology that traps any emissions released by the plant. Likewise, Swedish fast food burger chain Max Burger introduced a "carbon positive" menu in 2018 and offsets 110 percent of its entire supply chain's carbon emissions in order to operate as a carbon negative company. Mevo, a car-sharing company based in New Zealand, offsets all emissions of its vehicles by 120 percent while U.K.-based sportscar manufacturer Briggs Automotive Company intends to achieve a similar carbon negative status in the coming years. Perhaps the biggest firm to make the carbon negative commitment alongside Microsoft is Ikea, which has dumped $200 million into the development new technologies that will help it remove carbon from the atmosphere. It, like Microsoft, intends to hit carbon negative by 2030. These companies are responsible for their fair share of pollution, but actively removing all that carbon and more from the atmosphere would be a good step toward making things right.

More like this
Are carbon offsetting apps legit?
By AJ Dellinger
Jeff Bezos is going to space, which is the most divorced guy thing imaginable
By AJ Dellinger
Another reason to legalize weed: It'll be better for the environment
By AJ Dellinger
Stay up to date