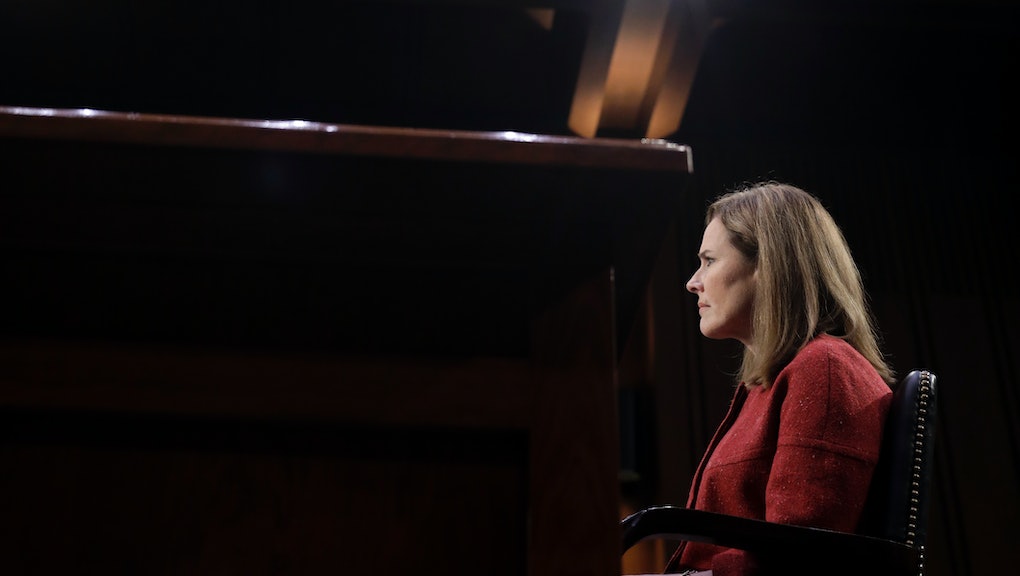 On the Amy Coney Barrett nomination, Democrats have already lost the fight

We’re on day two of the confirmation hearings for Supreme Court nominee Amy Coney Barrett, and for all of the dramatic rhetorical posturing on both sides of the aisle, the actual proceedings have been surprisingly tame. If the impassioned tweets following the late Justice Ruth Bader Ginsburg’s passing were any indication, we all expected more fireworks and conflict — or at least more of a dogged resistance from Democrats in hopes of preventing the hearings from happening at all.

It’s difficult not to compare these hearings to the theatrics and abundance of hot air that filled Justice Brett Kavanaugh’s confirmation hearing back in 2018. And of course, Barrett is not an alleged rapist, so perhaps the intensity seems dialed down by comparison. But still, much has been made about how this Supreme Court nominee in particular has the potential to dramatically and definitively undo decades of judicial rulings in the past and steer a generation of rulings in the future.

So where was the sense of emergency from Democrats before this point? There might be a lingering thread of hope that Barrett won’t be confirmed, but it’s a thin one; Republicans have a decisive majority in the Senate and appear to have already collected enough votes to send Barrett to the bench. The most effective argument against Barrett’s nomination was the fact that it is coming before the Senate barely 20 days before one of the most hotly-contested presidential elections in our country’s history. The time for that fight would’ve been before the hearings had actually started, but the Democrats gave that up without much actual conflict at all.

For what it’s worth, the Dems did seem to have a well-thought-out strategy for Monday’s session, spending the day on Barrett’s commitment, or lack thereof, to protecting the Affordable Care Act (ACA). The Supreme Court is scheduled to hear a case on Nov. 10 that could provide the opportunity for the court to overturn the ACA, so the emphasis is a timely one. But Tuesday’s hearing — which touched on things like reproductive rights, gun control, election-related rulings in case the race between Donald Trump and Joe Biden reaches the high court, and her approach to interpreting the law — gave the public a chance to see how she navigated a broader array of topics.

But Barrett’s responses Tuesday made one thing painfully clear: She wasn’t going to give up any details about her political perspective or show her hand in any way that belied her conservative politics. On question after question, topic after topic, the nominee skipped right past a direct answer in favor of a more boilerplate, nonpartisan response. She simply just couldn’t tell any of the senators how she might rule or whether she agreed or disagreed on some of the largest and most influential cases of the last 50 years because it would be inappropriate. She doesn’t have an agenda, she repeated over and over again, and would apparently decide how she feels about the major societal issues of the day in the moment when she literally actually rules on those cases.

This lukewarm approach is a smart one, particularly in a political climate that has become progressively more polarized over the last four years under an extremist president who parrots extremist views (and excuses extremist violence over and over again). We already know many Republicans are a fan of Barrett’s viewpoints, but there are likely more Democrats than we realize who find this kind of performed “objectivity” and “neutrality” refreshing. It’s the exact sort of “back to normal” branding the Democratic Party establishment has been pushing for Biden’s entire presidential campaign — a commitment to prioritizing a semblance of law and order, of impartiality and civility, of a return to the status quo despite what that political smoke screen will cost countless of us.

Barrett’s middle-of-the-road strategy claims she’d magically interpret the law with no bias or personal influence, despite she herself admitting that there is no one right way to interpret the law. At Tuesday’s hearing, she told Sen. Lindsey Graham (R-S.C.) that she’s an “originalist,” meaning that she “interpret[s] the Constitution as a law — that [she] interprets its text as text. And [she] understand[s] it to have the meaning that it had at the time people ratified it.”

In other words, Barrett’s legal philosophy is to parse what a group of conflicted men meant when they wrote the Constitution in 1787. Seconds after that answer to Graham, though, Barrett admitted that originalists themselves don’t always agree on the interpretation. It begs the question: What might then influence people to develop different interpretations of the exact same text? The possibility of multiple understandings even within one group, whose members adhere to the same overarching legal philosophy, would seem to make an individual’s personal politics that much more important, no?

The latest, most high-profile issue in Barrett’s hearing has been the possibility that her confirmation will allow for the overturning of Roe v. Wade and the loss of the limited, tenuous ground we’ve managed to secure in the fight to protect reproductive rights. Looking at Barrett’s past career as a judge and law professor, major issues like same-sex marriage and the ACA might be on the chopping block as well. And with her history of conservative politics, concerns over her viewpoints on the climate crisis and the need to implement environmentally-focused legislation mean the literal future of our planet might be at stake as well.

There’s also the fact that as the country continues to evolve, Barrett joining the bench makes way for a generation of conservative rulings from the Supreme Court that set new precedents on a whole host of issues. We may see Supreme Court decisions on big topics like the future of policing, surveillance, technology, housing justice, and so much more.

And yet, the confirmation hearings are set to pass relatively smoothly, with perhaps a few viral video clips of the proceedings’ most interesting bits. And they’re almost certainly set to end with a judge becoming a newly confirmed justice — President Trump’s third confirmed nomination of his four years.

What might’ve happened if [Democrats] had, say, organized some sort of direct action — perhaps even coordinated with their organized constituents in some way — to prevent the hearings from starting?

I don’t mean to be defeatist, but if Kavanaugh could get confirmed with multiple credible sexual assault allegations and a ridiculous lack of composure, I’m having trouble understanding why Barrett would struggle to secure a seat. In fact, no Supreme Court nomination has been rejected in a vote by the Senate since 1987. Why did Democrats believe Barrett would be different?

The Democrats should’ve waged the fight for this Supreme Court seat before the hearings began. What might’ve happened if they had, say, organized some sort of direct action — perhaps even coordinated with their organized constituents in some way — to prevent the hearings from starting? What could’ve been achieved with a sit-in style protest? Isn’t this time to stop treating court-packing as the nuclear option, and start considering it as a reasonable response to a high court in dire jeopardy?

If landmark rulings might be on the verge of being overturned and future dangerous precedents appear to be on the horizon, if all these life-altering legal decisions appear to be at stake for millions of Americans if Barrett is confirmed, then it’s absolutely inexplicable Democrats didn’t treat this as the national emergency they’ve tweeted that it is. But in the face of all that bluster, it would seem that Democrats are still committed to relying on traditional means to navigate woefully untraditional times, leaving the most vulnerable Americans unprotected and even more vulnerable than they already were — and with political representatives that are much more bark than bite.