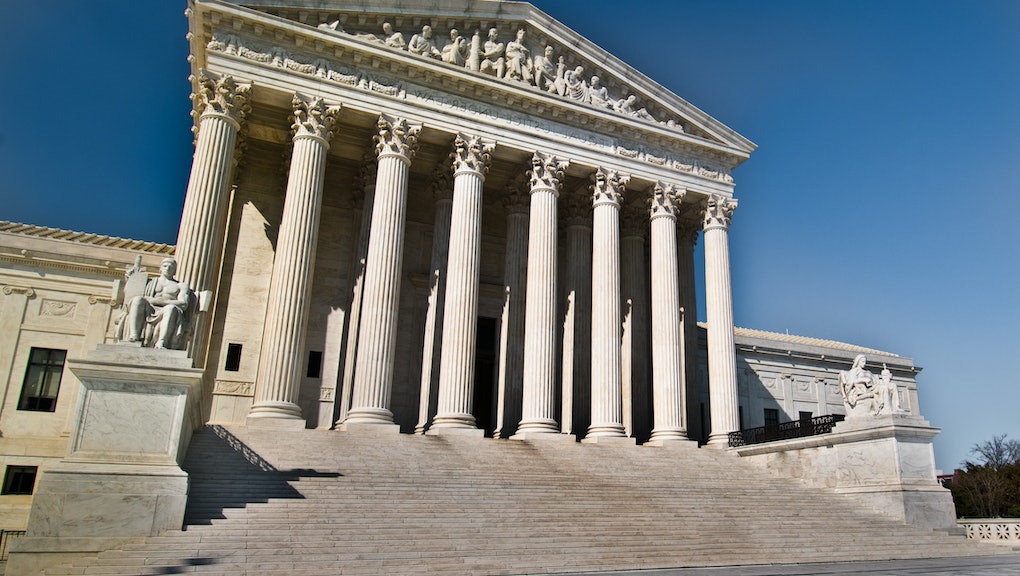 Packing the court has finally been officially introduced in Congress

The Supreme Court, like so many other American institutions, has become a dramatically polarized, politicized, partisan machine, whose intended purpose as a neutral arbiter of constitutionality has been warped by centuries of tinkering and manipulation by the various powers that be. That vulnerability to ideological engineering was on full display during the Trump administration, as the GOP-led legislative and executive branches of government coordinated to unbalance the ostensible neutrality of the court, and send it careening wildly to the right for a generation to come. In response, there's been a renewed focus among certain corners of Democratic politics to explore the possibility of expanding the membership of the highest court in the land — a.k.a., "packing" the Supreme Court with additional justices in the belief that more people would restore some ideological balance, and make it harder to skew the bench one way or another in the future.

That push to pack the court took a significant, if likely futile, step forward Thursday, as Democrats in both the House and Senate introduced complementary bills to add four new justices to the bench, bringing the total membership of the Supreme Court from nine to 13.

"Republicans stole the court's majority, with Justice Amy Coney Barrett's confirmation completing their crime spree," Massachusetts Sen. Ed Markey, the bill's Senate sponsor, said in a press release announcing the legislation. Barrett was confirmed just a week before the 2020 presidential election; meanwhile, GOP Senate leadership refused to entertain former President Barack Obama's SCOTUS nominee in early 2016, arguing that it was unfair for a president to appoint a judge for a lifetime just months before an election. "Of all the damage Donald Trump did to our Constitution, this stands as one of his greatest travesties. Senate Republicans have politicized the Supreme Court, undermined its legitimacy, and threatened the rights of millions of Americans, especially people of color, women, and our immigrant communities."

"This legislation will restore the Court's balance and public standing and begin to repair the damage done to our judiciary and democracy," Markey continued, adding, "We should abolish the filibuster to ensure we can pass it."

Invoking the threat posed by the existing filibuster rules is a not-so-subtle admission on Markey's part that changing the scope of the court — while constitutionally legitimate — would be an uphill battle, with a virtual guarantee of zero Republican backing. Indeed, just hours after the Democrats' bill was announced, GOP senator and martial law enthusiast Tom Cotton was already predicting apocalyptic doom and gloom should the measure pass.

Senate Minority Leader Mitch McConnell — arguably the person most responsible for the Supreme Court's politicized lurch rightward — was slightly less cataclysmic in his response to the Democrats' plan, saying it would simply destroy the court's "legitimacy." (As if his own machinations hadn't already taken care of that.)

Which isn't to say the whole of the Democratic Party is onboard, either.

Asked during her weekly press conference whether she backed the proposal — sponsored in the House by Reps. Hank Johnson (Ga.), Mondaire Jones (N.Y.), and, crucially, Judiciary Committee Chairman Jerry Nadler (N.Y.) — House Speaker Nancy Pelosi responded with a resolute "no."

"I have no intention to bring it to the floor," she continued, suggesting instead that she preferred the Biden administration's deeply uninspiring plan to ask other people what to do, as if the problem with the court isn't as obvious as its inevitable solution.

Nadler's Senate Judiciary Committee counterpart, Illinois's Dick Durbin, was equally circumspect, telling reporters Thursday that "I just heard about it. I'm not ready to sign on yet. I think this commission of Biden is the right move."

"Let's think this through carefully," he added. "This is historic."

While Durbin and Pelosi are correct that the issue of expanding the court is a historic leap forward for the judiciary, the notion that somehow a presidential commission to merely explore the subject will have a better, more accurate take on what has been playing out in front of everyone's eyes for years now is just laughable. Support it or not, at the very least, Democrats' plan today is a plan to do something.

More like this
Stephen Breyer won't retire from SCOTUS because he's having too much darn fun
By Rafi Schwartz
It appears Trump is the last person to realize that Brett Kavanaugh sucks
By AJ Dellinger
Trump kept a Gitmo prisoner detained for 5 extra years. Biden has finally freed him
By Rafi Schwartz
Stay up to date