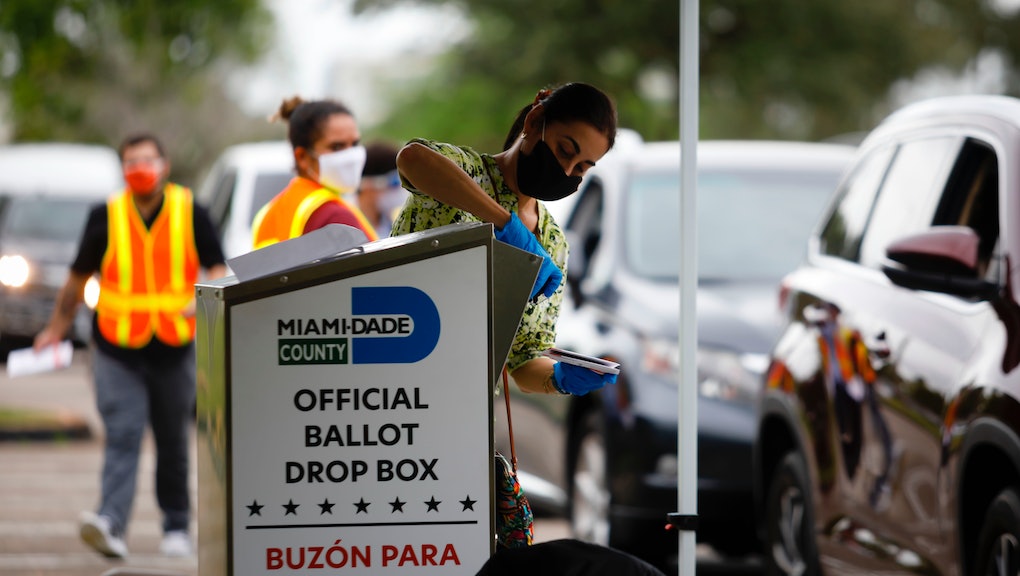 Ahead of an election that figures to see a huge spike in mail-in voting, the U.S. Postal Service has been hit with service disruptions and money struggles. First-class mail — which includes ballots — is caught up in the delays, too, posing a concern for the millions of Americans turning to mail-in voting due to the coronavirus pandemic. On Monday, though, the Supreme Court delivered a win for absentee voting, ruling that Pennsylvania can keep its extension on counting mail-in ballots despite Republicans' attempts to have it overturned.

Last month, the Pennsylvania Supreme Court made a few rulings regarding mail-in voting, including extending the absentee ballot deadline, declaring that such ballots were valid to be counted as long as they were postmarked by Election Day. This was seen as a major win for Democrats because Pennsylvania is a key battleground state; early data shows that Democrats are voting by mail more than Republicans. However, Pennsylvania Republicans asked the Supreme Court to overturn the ruling.

"This is an open invitation to voters to cast their ballots after Election Day, thereby injecting chaos and the potential for gamesmanship into what was an orderly and secure schedule of clear, bright-line deadlines," Pennsylvania Republicans wrote in their appeal. They went on to add that "the new rules imposed by the decision of the Supreme Court of Pennsylvania (a body elected in partisan elections) could destroy the American public's confidence in the electoral system as a whole."

But on Monday, the U.S. Supreme Court, with currently only eight sitting justices after Ruth Bader Ginsburg's death last month, issued a tied 4-4 decision on the case — meaning there was no majority to overturn the ruling. So the Pennsylvania Supreme Court decision stays, meaning the state's extension is valid. The move was celebrated by Marc Elias, a top Democratic election lawyer, on Twitter, who wrote, "GREAT NEWS for voting rights and voters in Pennsylvania."

This ruling is just one small example of the election-related fights that have sprung up in courts across the country. A number of battles center around mail-in voting, as Trump has made it his mission to constantly slam and question the legitimacy of the practice (despite having voted by mail himself). By painting mail-in voting as fraudulent ahead of the election, Trump is setting the stage to contest the results if they are not in his favor, and riling up his supporters ahead of time.

People have picked up on Trump's strategy. Earlier this summer, a group of voters sued the Trump administration over its changes to the USPS. Politico reported that the voters wrote in their complaint that Postmaster General Louis DeJoy, a Trump appointee, "has ensured even greater chaos in the fall elections, putting his thumb on the electoral scales to help ensure Trump’s re-election and/or provide grounds for an election contest — not to mention helping Trump sow doubt in the minds of Americans about the integrity of the electoral process and the outcome itself, a loathsome tactic once associated only with tin-horn dictators and banana republics."

Perhaps most importantly, though, this recent decision hints at what impact conservative judge Amy Coney Barrett could have on the Supreme Court if she is confirmed. Business Insider reported that the court's four most reliable conservatives — Justices Brett Kavanaugh, Clarence Thomas, Samuel Alito, and Neil Gorsuch — voted to block the measure. It's likely that if she was on the Supreme Court, Barrett would have voted to do so, too, meaning that the extension would have been overturned. Her nomination is expected to be confirmed next week.