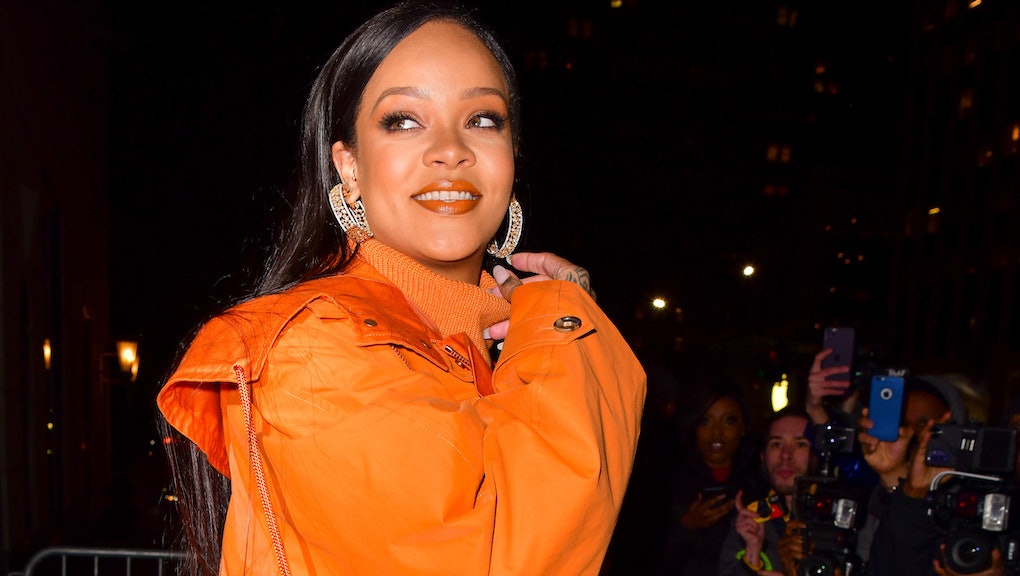 Musical icon and beauty entrepreneur Rihanna, ever the savvy businesswoman, recently purchased an entire mansion and invited TikTok stars to live there. How are they paying rent, you might ask? RiRi stocked the place with Fenty Beauty products and enlisted her talented tenants to make a bunch of beauty-focused content for the brand’s TikTok account. Absolutely genius.

"We are standing in the official, first Fenty Beauty TikTok home,” Rihanna announced to the crowd at a party celebrating Fenty's new mascara last week. "I just wanted to create a platform for the next wave of content creators. I think our generation is the sickest, the illest, the most creative. I can't do it alone, so to join in with the people who are influencing the world and my community and my generation, this is a hub."

Residents of the makeup mansion include Savannah Palacio, Emmy Combs, Challan Trishann and Dawn Morante. And from the looks of it, they’ve been busy since move-in day. The gang has already posted more than a dozen TikToks from inside the house, and they’ve only been there a few days.

For the “olds” in the back, here’s the concept of TikTok houses: they’re mansions in Los Angeles (usually) where swarms of influencers hang out and create “content,” i.e. take selfies in gargantuan mirrored bathrooms or film 15-second videos of themselves doing flips on the lawn… and stuff.

The houses are usually bought by neo-digital talent management companies, who rep influencers famous from YouTube, Instagram, Vine and — more recently — TikTok. Sometimes successful creatives foot the bill themselves and invite other like-minded young people in as tenants.

It’s not all fun and games and selfies, though. According to Taylor Lorenz’s reporting for the New York Times, at the Hype House, a recently-formed TikTok collective, there are stringent expectations for productivity. Full-time residents are supposed to post content daily. “If someone slips up constantly, they’ll not be a part of this team anymore,” Thomas Petrou, 21, a YouTube star and co-founder of Hype House, told the Times. The other Gen-Z mastermind behind the mansion is Chase Hudson, 17, a TikTok star with more than eight million followers.

“You can’t come and stay with us for a week and not make any videos, it’s not going to work. This whole house is designed for productivity. If you want to party, there’s hundreds of houses that throw parties in L.A. every weekend. We don’t want to be that. It’s not in line with anyone in this house’s brand. This house is about creating something big,” Petrou said.

The idea of TikTok houses is not particularly new; famous YouTubers started buying property to use as live-in film studios about five years ago. In 2014, an early collective called Our Second Life bought a house in LA they dubbed the “02L Mansion.” A year later, at the height of Vine, tons of top talent on the platform moved into an apartment complex at 1600 Vine Street. It’s like a DIY reality show, akin to how all the engaged couples on Love Is Blind moved into the same building in downtown Atlanta.

These groups of ambitious, camera-happy teens and 20-somethings have deep pockets, too. One group of YouTubers rented a $12 million mansion in the Hollywood Hills a couple years ago and named it… the “Clout House.”

Nowadays, there are numerous “collab houses” dotting Los Angeles and fierce competition among different factions of creatives. The residents of Hype House are mostly white, and TikTokers are making moves to establish other influential collectives, proposing a Melanin Mansion for black creators. Groups like Cabin Six, a queer collective, and Diversity University have also started to form. New ones are popping up weekly, mirroring the warp-speed rise of TikTok itself, which surged to popularity last summer, becoming the first non-gaming app to reach #1 on the iOS app store in September 2019.

“TikTok has brought a younger group of creators. That energy is kind of pushing on a lot of older creators,” Josh Sadowski, 19, a TikTok star with nearly four million followers, told the New York Times. “There’s all these kids who want to move to LA and make content, and TikTok is pushing their growth so much. Everybody is really, really driven. They’re bringing that energy to L.A., and it’s rubbing off on everyone else. No one wants to miss out.”

Least of all Rihanna. She’s *the* trendsetter, thank you very much. Fenty, by extension, is an exceptionally forward-thinking brand, and TikTok, with its 500 million active users, offers a lucrative opportunity in the beauty space. Marc Anthony True Professional’s Strictly Curl Lotion went viral in a TikTok challenge in 2019, for example, and the brand saw a 60% uptick in sales, as a result. No doubt Fenty could enjoy a similar bump, though the brand is already wildly successful.

At the absolute bare minimum, even if the Fenty Beauty TikTok House didn’t make Rihanna a dime (which it will; it will probably make her tons of “coin,” in fact), all of us following along on our phones will wind up with a veritable trove of Fenty Beauty makeup tutorials. It’s perfect timing, too, since we’re all staring down a pretty isolated spring in the age of coronavirus. Finally, there’s time to learn how to contour…

More like this
Phoebe Bridgers and John Mulaney announced tour dates and the internet imploded
By Chloe Stillwell
Issa Rae, Lil Nas X, and J-Lo just gave us a masterclass in social media
By Keith Nelson Jr.
The only thing Lil Nas X is guilty of is stealing the internet's heart
By Brandon Yu
Stay up to date