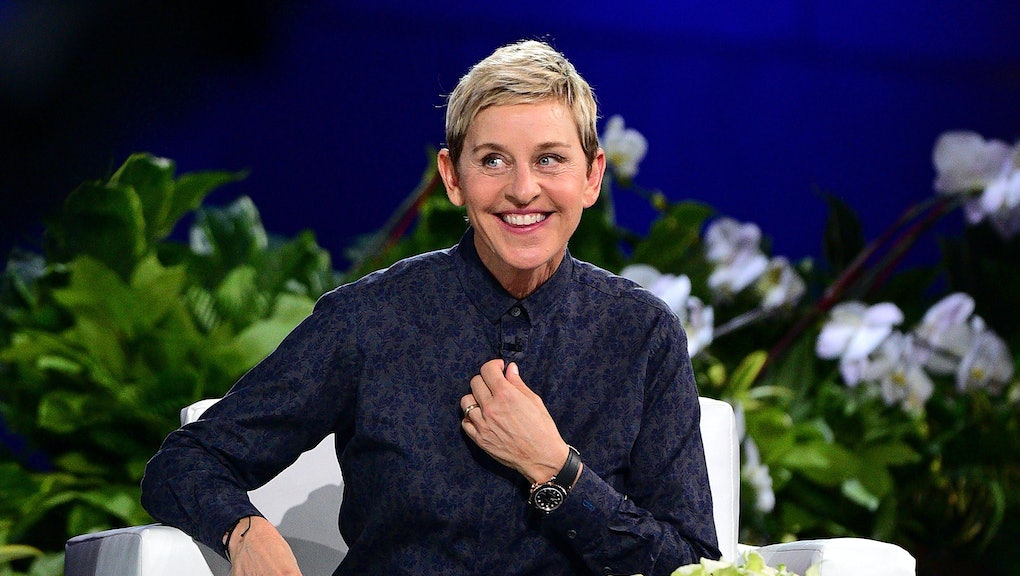 Those Dakota Johnson GIFs all over the timeline signal the end of an entertainment era: Ellen DeGeneres is ending her talk show in 2022. Next season, Ellen's 19th on television, will be its last. But DeGeneres had a rather curious explanation for why she chose to step away. “When you’re a creative person, you constantly need to be challenged — and as great as this show is, and as fun as it is, it’s just not a challenge anymore,” she told The Hollywood Reporter.

On one hand, that makes sense. Who stays in the same job for nearly two decades these days? (Aside from Ellen Pompeo on Grey's Anatomy, and she's the highest-paid actress on broadcast TV.) But on the other hand, DeGeneres' claim that she's just not inspired by her hosting gig anymore conveniently sidestepped her slumping ratings and the bad press she's gotten in recent years for allegedly not practicing the "be kind" ethos she preached. Last summer, those who toiled behind the scenes to make the comedian a beloved household name accused her of fostering a toxic workplace in a BuzzFeed exposé, and her critics have been calling for her ouster ever since.

Folks who follow this stuff peg the beginning of DeGeneres' downfall to November 2019, when Johnson called her out on her own show for spinning the truth. You see, DeGeneres accused Johnson of not inviting the host to her star-studded 30th birthday party the prior month. But the actress firmly corrected her with a now-infamous rebuttal: "Actually, no, that's not the truth, Ellen." Johnson even got the show's producers to back her up. Hilariously, the weekend the actress threw her birthday bash in Miami, DeGeneres was at a football game with George W. Bush in Dallas.

All the celebration around the end of Ellen does highlight the sexism baked into network TV, however. As Guy Branum pointed out on Twitter, David Letterman was allowed to be mean on late-night forever, but women are still largely shunted to daytime and expected to be perpetually nice on camera. I'm not advocating for cruelty or saying anyone should be given a pass for bullying their employees, but it wouldn't be the worst thing if female comedians like DeGeneres were allowed to show the public their pricklier sides once in a while without risking getting cancelled, in both senses of the word. But DeGeneres has never seemed very comfortable taking off her mask of goofy affability. An exception is her 2018 Netflix stand-up special, where she addressed the paradox of likability head-on, and it was one of her most resonant performances in recent memory.

DeGeneres confronted the toxic workplace accusations during last September's season premiere of Ellen: "I know that I’m in a position of privilege and power, and I realize that with that comes responsibility," she told viewers. "And I take responsibility for what happens on my show. Today we are starting a new chapter." Her candor earned the season opener the highest ratings for an Ellen premiere in four years. But then there was the sense she felt a single mea culpa would make up for years of behind-the-scenes toxicity. Audiences seemingly saw right through it and tuned out. Ellen lost more than a million viewers in six months.

DeGeneres may be ending her long-running talk show next year, but it's not like she won't still be on our screens. She'll continue doing unscripted shows for Warner Bros. like Fox’s The Masked Dancer, NBC’s Ellen’s Game of Games, and HBO Max’s Ellen’s Next Great Designer. Just like Oprah did when she uncoupled herself from daytime TV, DeGeneres will undoubtedly parlay her experience into a bevy of lucrative gigs. So don't cry for Ellen, America. DeGeneres will lace up her sneakers and dance her way to further fame and fortune soon enough.