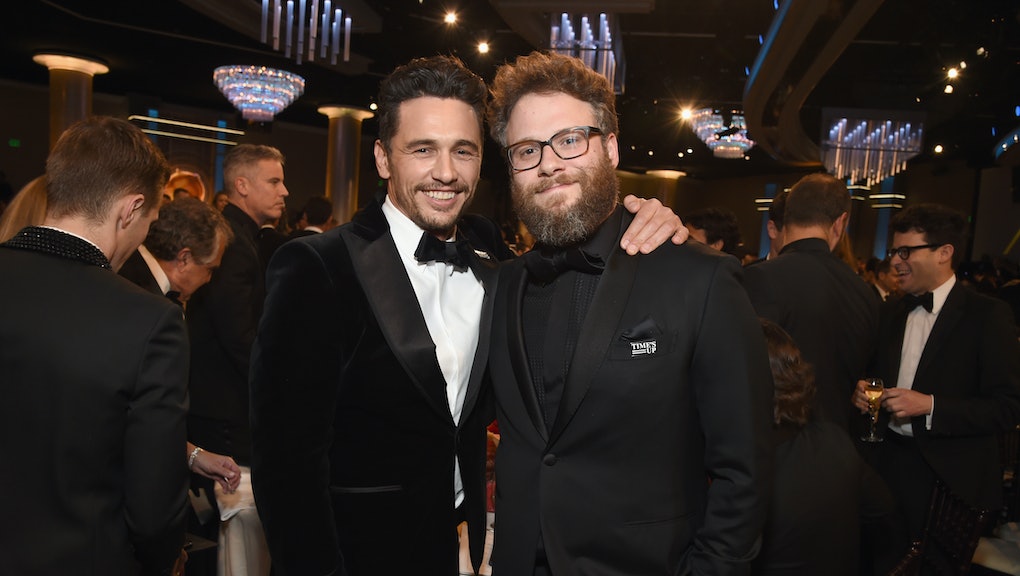 Seth Rogen isn't sticking up for James Franco anymore. Is it too little, too late?

Their twin careers grew out of co-starring in the cult sitcom Freaks and Geeks in the late 1990s. In the next 20 years, Seth Rogen and James Franco would star in eight different movies together. There was stoner romp Pineapple Express in 2008 and apocalypse comedy This Is The End in 2013. They caused a real-life international incident with 2014’s The Interview, played anthropomorphic grocery items in 2016’s Sausage Party, and spoofed the worst movie ever made with 2017’s The Disaster Artist. But don’t hold your breath for another collaboration by the stoner-bro duo — most likely ever. Rogen told Britain’s The Times that due to the sexual misconduct allegations against Franco, he doesn’t plan to work with him "right now."

This is notably not what Rogen said three years ago, when he vouched for his friend after five women accused Franco of inappropriate and sexually exploitative behavior. Rogen now acknowledges that was dumb: “I also look back to that interview in 2018 where I comment that I would keep working with James, and the truth is that I have not and I do not plan to right now,” he told The Times.

In early 2018, right after Franco won a Golden Globe for The Disaster Artist, several of his former acting students told the Los Angeles Times that he’d coerced them into sexual situations by promising them film roles that never materialized. This February, Franco settled the lawsuit two of the women filed against him. It wasn’t the first time he’d been accused of being a creep towards young women, either. In 2014, Franco was busted hitting on a 17-year-old on Instagram. Rogen minimized his buddy’s behavior back then, too. While hosting Saturday Night Live, he quipped: “I decided to prank James Franco. I posed as a girl on Instagram, told him I was way young. He seemed unfazed. I have a date to meet him at the Ace Hotel.”

Rogen apologized for that gaffe: “What I can say is that I despise abuse and harassment and I would never cover or conceal the actions of someone doing it, or knowingly put someone in a situation where they were around someone like that,” he told The Times. “However, I do look back at a joke I made on Saturday Night Live in 2014 and I very much regret making that joke. It was a terrible joke, honestly.”

The comedian also acknowledged that the allegations against Franco had “changed many things in our relationship and our dynamic” and said it was “not a coincidence” that he’d severed ties. The Times interviewer noted that the split “must be painful,” and Rogen replied: “Yeah. But not as painful and difficult as it is for a lot of other people involved. I have no pity for myself in this situation.”

Unlike Franco’s cratering reputation, Rogen’s image has been on an upswing. He started making pottery in quarantine and recently launched his own line of cannabis. He also did the right thing by publicly denouncing Franco — finally — but it’s important to acknowledge the ways he’s complicit in letting an accused abuser evade consequences.

It took guts for actor Charlyne Yi, who appeared alongside Rogen and Franco in The Disaster Artist, to call them both out last month. “When I tried to break legal contract and quit Disaster Artist because James Franco is a sexual predator, they tried to bribe me with a bigger acting role,” she claimed on Instagram, adding that since Rogen was a producer on the film, “he definitely knows about the bribe and why I quit.” Yi also accused Rogen of “enabling” Franco’s “long history of preying on children.” It seems like her pointed message resonated with the right people; who knows whether Rogen would’ve denounced Franco without the bad press.

This whole saga made me think about what LeVar Burton recently dubbed “consequence culture.” His point was that the term “cancel culture” is a misnomer, because those who seek to reassess the past through a modern lens aren’t seeking to erase it, but rather hold those responsible accountable. Franco evaded justice for years, but that’s now begun to change, and it’s hard to imagine his career bouncing back. That’s progress.

Rogen can’t edit out the sexism and homophobia that plagued his films in the aughts. He can’t pretend he never collaborated with Franco on eight films and a TV series. But as the patron saint of a generation of schlubby dudes, maybe his current apology tour will inspire those men to take a hard look at what they’ve let their friends get away with and pledge to call them out.