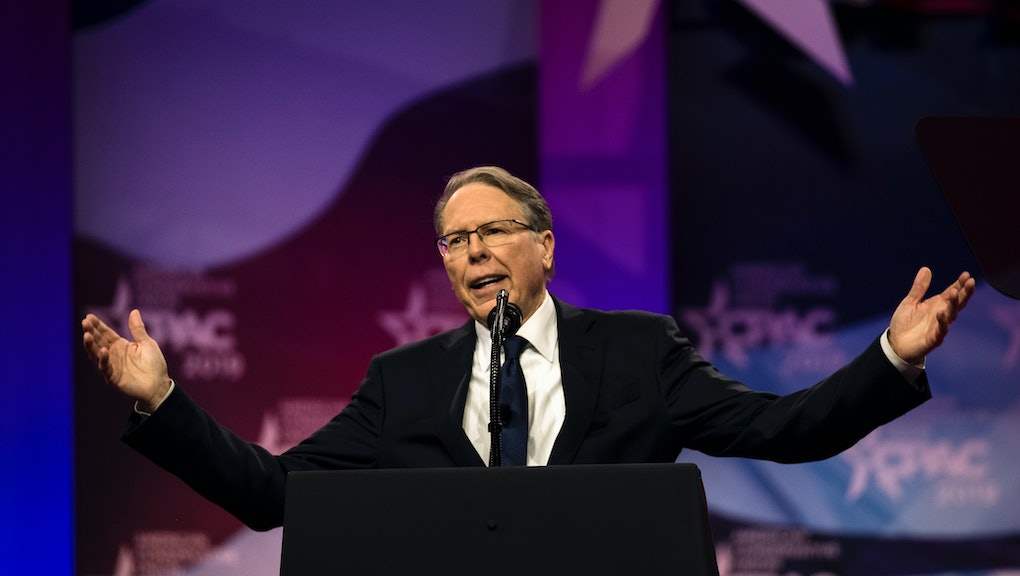 Rampant gun violence might not be a uniquely American crisis, but the U.S. certainly has the market cornered when it comes to mass shootings — not to mention a political system with a seemingly endless capacity to absorb each new instance of mass murder with shocking(ly predicable) complacency.

It can be easy in this constant churn of rampant lethality and subsequent inaction to forget who the real victim of America's gun violence obsession actually is. No, not the many, many, many people who have been killed, injured, or otherwise had their lives and communities irrevocably upended by mass shootings. I'm talking about someone who, time and again, has suffered with each shot fired, only to return stronger than ever: top National Rifle Association (NRA) Executive Wayne LaPierre.

During a recent deposition as part of the NRA's effort to declare bankruptcy and move its headquarters to Texas (seemingly to avoid potential prosecution in New York), LaPierre described the "security retreats" he and his family took in the wake of both the Sandy Hook Elementary School massacre in 2012 and the mass shooting at Marjorie Stoneman Douglas High School in 2018. Those "retreats," it turns out, took place on Illusions, a 100-plus-foot-long luxury yacht owned by mega-producer David McKenzie (occasionally known as David Stanton). McKenzie reportedly offered the craft to LaPierre as a hideaway while the country reeled from the latest instances of mass murder.

In deposition transcripts released this past weekend, LaPierre admitted he didn't think to offer any sort of payment for use of the yacht, which included a stocked kitchen, full tank of fuel, two Sea-Doo jet-skis, a separate 16-foot jet boat, and "two or three or four staff people" not counting the ship's chef — all of which LaPierre availed himself.

"They simply let me use it as a security retreat because they knew the threat that I was under," LaPierre explained, noting he didn't think he violated the NRA's conflict-of-interest policy because of that threat. "And I was basically under presidential threat without presidential security in terms of the number of threats I was getting."

All of us were struggling with how to deal with that type situation with a private citizen with the amount of threat that we were having. And this was the one — one place that I hope could feel safe, where I remember getting there going, 'Thank God I'm safe, nobody can get me here.' And that's how it happened. That's why I used it.

In LaPierre's defense, not paying for a family vacation on a luxury yacht must have taken a lot of self-restraint on his part, considering his reported penchant for dropping hundreds of thousands of the NRA's dollars on things like fancy clothes and hotel rooms. LaPierre also claimed to have stopped taking "security retreat[s]" on Illusions in 2019 as "part of the self-correction that we have done at the NRA."

Incredible bravery on display here, folks. Imagine if Wayne LaPierre, a man who has dedicated decades of his life to ensuring that every single American has the ability to kill as many people as possible with as much ease and efficiency as a professional soldier, hadn't absconded to a floating palace to escape the consequences of his own actions. My god, imagine if his fear of the mere threat of violence meant he'd be forced to cower under a school desk, or barricade himself in a kindergarten classroom? When you're Wayne Lapierre, you can leave that sort of stuff to the hoi polloi.