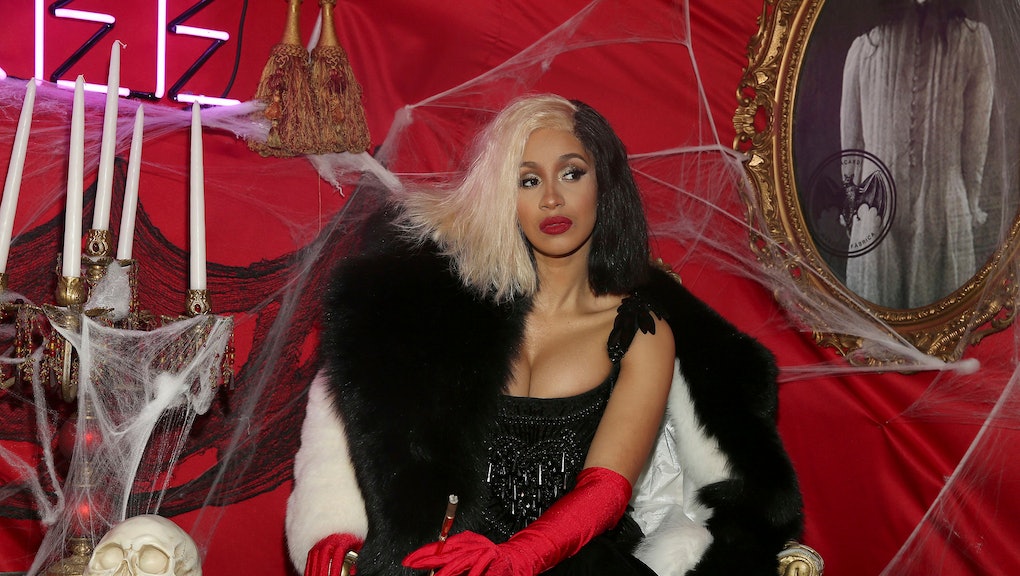 The best, the cringiest, and the most extra celebrity Halloween costumes

It’s Halloween! This year, because it is on a Thursday, that means it’s actually been Halloween since October 25, and that it will continue to be Halloween until November 2. For those of you who aren’t inspired by the idea of getting dressed up and then partying in cheap makeup and poorly made wigs, that’s not great news. But for those who love the holiday, this has been an opportunity for multiple attempts at the perfect costume. Of course, no one loves Halloween more than celebrities, who seem to have no trouble spending their wealth of resources on costumes. But pulling off a costume is difficult, and only a handful of celebrity Halloween costumes are a hit. In fact, a number of them really miss the mark.

Here's a rundown of this year's best, worst, and most extra celebrity Halloween costumes.

Normani remains committed to absolute excellence all year. There was her Motivation video. The Fenty Savage runway performance. And now, this absolutely perfectly executed recreation of Naomi Campbell’s 1991 modeling look. It even received the Naomi seal of approval.

Jordyn Woods and Megan Thee Stallion in any photo together is a blessing. As two lethal assassins? Stunning. Both Megan and Jordyn seem to have a deep love for Halloween; this is not Jordan’s only costume for the year, and Megan has an entire five-part Youtube show (titled HOTTIEWEEN) dedicated to solving a spooky mystery.

Missy Elliot has used the year 2019 as a year of reclamation: she released new music, picked up her MTV Video Vanguard award, and reminded everyone that she’s one of the most important musicians of the 21st century. For Halloween, she dressed up as her first album, released 22 years ago. Timeless!

Like Missy Elliott, Gabrielle Union wanted to remind everyone that she’s iconic. For her 47th birthday, which is October 28, she dressed up as her iconic role as the best cheerleader in East Compton, Isis, in Bring It On, looking eerily similar to how she did 19 years ago. She credits water and tequila for her youthful appearance. There’s definitely a little Halloween magic involved too.

The photo with Snoop Dogg? Perfection. DJ Quik even gave Tracee a shoutout on his Instagram for this costume, which she wore to Gabrielle Union's birthday party. Fun fact? They share a birthday!

Cardi B as a Sexy Nurse

On several websites, including Fashion Nova, there are Cardi B costumes for sale that are more exciting than this one. The sexy nurse is a classic — but given how hard Cardi B has gone with looks for music videos, this costume falls a little flat. But... This was the weekend before Halloween, so maybe something better is coming along.

Kylie Jenner as The Little Mermaid

Kylie Jenner put her infant daughter in a version of her Met Gala look and dresses herself up as a princess? Let your baby be a baby, please! The costume was technically accurate, but not as good as other Kylie costumes from past years, like her Dirrty Xtina get up. You can't go wrong with chaps!

Ellen Degeneres as Cardi B

Ellen, no matter who you dress up as for Halloween, no one is going to forget you hang out with George Bush. Cardi E was just uncomfortable to watch.

Ciara and Russell as Beyonce and Jay-Z

When it comes to precision, Russell Wilson and Ciara win all Halloween costume contests. But that’s because Ciara is wearing the actual suit that Beyonce wore in the “Apeshit” video, an advantage only a celebrity could have in the costume game. She also used the opportunity to mock Future on Twitter, which is the spookiest thing of all.

Everyone complaining about “cancel culture” in 2019 should just be grateful that we didn’t have the French version of it, circa 1793. Marie Antoinette, portrayed here by a very committed and fully costumed Demi Lovato, was canceled (guillotined) by the people of France just weeks before Halloween in the 18th Century. Haunting.

As an infant, one probably has few interests. You’re just so little. And yeah, your mom is probably one of your favorite people. But if infants were able to respond to a poll about what they would like to be dressed up as, absolutely zero infants would pick their mom’s Met Gala gown. Let kids dress up as cartoons they like! Stormi did look cute though, even if she appeared to be a bit miserable.

Tracee Ellis Ross as Us

Diana Ross’s daughter simply loves Halloween, and for the Blackish Halloween episode, the family dressed up as the scissor wielding, neighbor murdering family from Us. Tracee Ellis Ross nailed the look — so much so that it’s hard not to be a little creeped out by this shadowy photo.